« TWiM 222: Biosensors in bacteria | Main | These Bacteria are Out of This World: Human Pathogens on the International Space Station »

Without any doubt, when we think about the early history of penicillin – and antibiotics in general – our minds are quickly drawn to a particularly momentous occasion. On September 3rd, 1928, Alexander Fleming returns to his lab after a month-long vacation and notices that on a discarded Petri plate there is no bacterial growth around the colony of a contaminating mold. A mold had inhibited a bacterium! Much has been written about the role that chance played in this discovery, as well as the hard work that preceded and followed it, to make penicillin the miracle drug that it became in the 1940s. An engaging and succinct treatment of the subject can be found here. 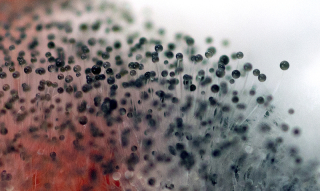 My interests prompted me to search for the earliest observations that hinted at antagonistic interactions between molds (fungi) and bacteria. Several investigators prior to Fleming had reported such interactions, but who was the first to document them? I do not know with certainty, but some time ago I ran into a description that, as far as I can tell, may be among the very first. To put it in context, this was a time before Koch had developed his approaches to obtain pure cultures. Investigators relied largely on careful observation of liquid cultures, through light microscopy but often with the naked eye. In this historical context the careful observations of the English physiologist Sir John Burdon Sanderson point to molds inhibiting bacterial growth. The year was 1870 and he published his results in a paper whose title already shows that succinctness was not his strength:

Sanderson, J. B. Appendix No. 5—Further report of researches concerning the intimate pathology of contagion. The origin and distribution of microzymes (bacteria) in water, and the circumstances which determine their existence in the tissue and liquids of the living body. In 13th Report of the Medical Officer of the Privy Council [John Simon], with Appendix, 1870, Her Majesty's Stationery Office, London (1871), pp. 56-66.

Reading the whole paper is an education in itself, but for the topic at hand the key experiment is the one he started on October 5th. (Explanatory notes: torula was the term used to describe generic yeast-shaped cells and penicillium referred to any mold. Pasteur's solution was the "LB" of the day: 100 parts distilled water, 10 parts pure sugar candy, 1 part tartrate of ammonia, and the ashes of 1 part of yeast.)

"October 5. — Two test glasses were placed side by side on a shelf under a glass shade, one of which, marked a, contained unboiled Pasteur's solution, the other, marked b, boiled solution. On October 10 glass a was turbid, and was found on microscopical examination to be teeming with bacteria; a thick whitish scum had formed on its surface. Glass b was perfectly clear; there were, however, great numbers of torula cells on its surface, but no bacteria. On October 12 b exhibited numerous tufts of penicillium, but the liquid still remained limpid and free from bacteria."

There you have it, perhaps the first written description of fungal inhibition of bacterial growth. And, if you are a biofilm aficionado as I am, an early description of a floating bacterial pellicle to boot: "a thick whitish scum had formed on its surface."