The Dead Sea Scrolls come under the Genomic ’Scope

In this blog, we usually stick to microbiological topics, but when one of biblical proportions comes along, we do not fight it. We are in fact pleased to consider news about the Dead Sea Scrolls, the 1000 or so fragments of ancient documents found in caves and elsewhere in the Judean Desert. Their discovery is thought to be one of the most important archaeological events of all time as it helps figure out the development of Judaism and the beginning of Christianity.

The scrolls were written some 2000 years ago on animal parchments. Practically all of them are fragments, some just crumbs. Much of the rolled up material is in such delicate condition that it cannot be unrolled safely. Indeed, some of the rolls have only been "read" with the use of particle accelerators. Imagine! 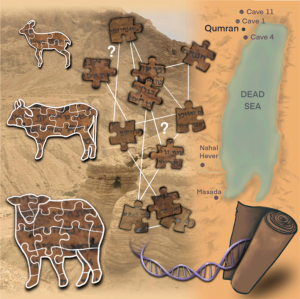 Genetic Characterization of Parchments. An­cient DNA allows for species identification of the animal skins that parchments of the Dead Sea Scrolls were made from. Source. Fronti­spiece: Qumran קומראן. CC BY-NC-ND 2.0 Benjamin

Now a new paper comes along that uses the DNA sequence of the pelts to sort out indivi­dual fragments. This report has 16 authors from Israel, Sweden, and the USA. Some of the scrolls are so hard to examine that any information, however derived, could be of help to archeologists. In the words of the authors "In particular, the scriptural scrolls found in the Qumran caves are the oldest known copies of books of the Hebrew Bible and thus offer unprecedented insight into the very process of their formation, early dis­semination, and reception." According to the corresponding author of the paper, Od­ed Recha­vi, a researcher in the Department of Neuro­biology at Tel Aviv University, Israel, the scrolls pose two major challenges: "First, most of them were not found intact but ra­ther disintegrated into thousands of frag­ments, which had to be sorted and pieced together, with no prior knowledge on how many pieces have been lost forever, or how the original text should read… The second challenge is that most of the scrolls were acquired not directly from eleven Qumran caves near the Dead Sea but through antiquity dealers. As a result, it's not clear where many of the fragments came from in the first place, making it that much more difficult to put them together and into their proper historical context."

Enter parchment DNA. Sampling of the skins (done with extreme caution) showed that they came from sheep, goats, and cows. The results were highly enlightening. For instance, two fragments that had previously been thought to be adjacent were found to come from two different animal species. Detailed analysis revealed how close or distant the fragments are and, in some cases, where the text belongs in distinct early biblical sources. In particular, the book of Jeremiah seems to have been written divergently by scribes from different regions (and then brought to the Qum­ran caves). Such conclusions suggest that the region had a broad cultural landscape. In fact, this study revealed a number of other facts of importance to biblical scholarship. And who knows, it may open the way to investigating the microbiomes of these major historical documents (which, no doubt, will add to understanding of the significance of these invaluable historical sources.)

No sooner did I finish this piece that an article appeared in Environmental Microbiology entitled "Decoding the biological information contained in two ancient Slavonic parchment codices: an ad­ded historical value." It deals with the sequencing of DNA from analogous material as the Dead Sea Scrolls, albeit some 10 centuries newer. What merits noting is that this work includes the ana­lysis of the microbes found on this material. Most of the bacteria are salt-loving or salt-tolerant, in keeping with the salinity of the parchments. Quite a few matched those of the human skin, sug­gest­ing that they originated by manipulating the material.