These Bacteria are Out of This World:
Human Pathogens on the International Space Station

Professor Cheryl Okumura is in the faculty at Occidental College where she teaches an undergraduate course on Microbial Pathogenesis. Students in her class read some of our posts and are also asked to write pieces that mimic an STC post. Cheryl reached out to us last year and we posted two of her students' essays (see here and here). We love Cheryl's teaching approach and so we were delighted when she reached out to us again this year. Today's post is the first of two pieces selected from the course Cheryl taught Fall 2019. Kudos to you Cheryl for your passion and dedication to teaching microbiology! And many thanks for making STC part of your course. – The STC Team. 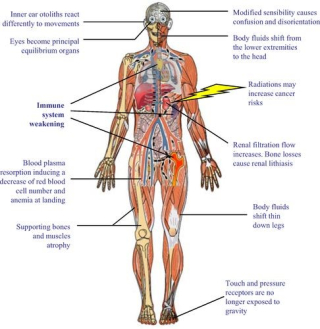 Figure 1. Spaceflight-induced physiological changes in the human body. Microbes can take advantage of the weakened immune system in humans on the ISS because of the unique and hostile conditions of space. Thus, it is necessary to characterize the microbial diversity on the ISS to de­termine the level of threat posed to astro­nauts Source. Frontispiece: Inter­national Space Station. Source

With the successful launch of the Crew Dragon by SpaceX, space exploration is once again in the American spotlight. Outside our planet, space is unconducive to life because of conditions created by cosmic radiation and microgravity. But as giant leaps were made for mankind, human-associated microbes have made small steps into the International Space Station (ISS). The ISS is the most complex international engineering and scientific project to date, inhabited by humans and their microbes since November 2000 (1). In addition to its mission and research objectives, the ISS also provides researchers with the unique opportunity to study in outer space the relationship between human health and microbes, including bacterial pathogens.

Astronauts experience limited gravity (formally, microgravity) in addition to high levels of radiation and general stresses on the body that lead to dampened immunity (2). Space flight causes a weakened immune response in astronauts (Fig. 1) (1,3,4). Specific effects include reduction in interferon synthesis, alteration of leukocytes in the spleen and bone marrow, and the inhibition of natural killer cells (1,4). Additionally, to these cells, macrophages and neutrophils are less responsive to stimuli in space flight conditions (1). This reduction in immune capability puts astronauts at higher risk of bacterial and viral infection (Fig. 1) (3). Gravity plays a key role in shaping the morphology and physiology of life on Earth (2), so removing this force from the environment causes changes in not only humans, but also in the microbes that inhabit them (2).

Microbes can grow in surface-associated communities – biofilms – that protect themselves from the extreme environmental conditions such as high and low temperatures, desiccation, low oxygen, high and low pH, radiation, and salinity (9). In hostile environments, biofilms offer protection and survival of bacterial communities and decrease antibiotic susceptibility (7,8). Microbes use these same strategies to their advantage in space (5). Microgravity, a more unique environmental stressor, has been shown to trigger bacterial biofilm formation (6). This poses a serious risk to astronauts who are immunocompromised (8). In addition to biofilm formation, microbes have other ways of becoming more virulent in space. During space flight, some bacterial species develop greater extracellular polysaccharides, which strengthens bacterial attachment to surfaces (6). For example, the cell wall of Staphylococcus aureus grown in outer space conditions was much thicker than under earth-like conditions (1). The cell wall is necessary for biofilm formation, and less of wall decreases biofilm (10). Therefore, a thicker cell wall leads to an increased ability to attach to surfaces (1).

With increased microbial attachment and decreased human immunity, it is essential to decrease biofilm formation and the threat that they pose for astronauts while aboard the ISS. A study by Sobisch et al. poignantly addressed this by investigating bacterial attachment to different antimicrobial coatings: One, AGXX®, consists of silver and ruthenium covered in ascorbic acid, and the other, silver (Ag), by itself (8). These coatings were placed on steel surfaces in common areas frequented by the astronauts on the spacecraft. The authors first characterized the bacteria that could colonize these coated surfaces. They identified 112 different bacterial species, 73.6% of which were human pathogens. The bacterial population was dominated by Gram-positives such as Staphylococcus, Bacillus, and Enterococcus (8). They found that on both uncoated steel and steel with antimicrobial coating, the amount of bacterial diversity increased with longer incubation times (Fig. 2). However, lower concentrations of bacteria survived on AGXX® than on silver-coated and uncoated steel (Fig. 2). The AGXX® was therefore most effective for preventing the growth and accumulation of bacteria.

After identifying these pathogens, it was crucial to assess their antibiotic resistance. Using the disc diffusion method, Sobisch et al. discovered that 68% of the pathogenic Gram-positive isolates from the ISS were resistant to three or more antibiotics. Enterococcus faecalis isolated from uncoated steel was resistant to nine antibiotics. The authors used gene-specific polymerase chain reactions (PCR) to determine which genes were responsible for resistance in the multidrug-resistant pathogens (8). The most prevalent genes were ermC and tetK, associated with antibiotic resistance to erythromycin and tetracycline, respectively (8). Using biparental mating assays, they found that these genes could be horizontally transferred between the ISS bacterial strains (8).

While the presence of antibiotic resistant human pathogens on board the ISS is a scary prospect, Sobisch et al. concluded that severe infections on the ISS are unlikely (8). The authors found no transfer of vancomycin resistant Enterococci (VRE) or methicillin resistant staphylococci (MRSA) between ISS strains. Furthermore, they argued that adding antimicrobial coatings such as AGXX® to the surfaces in the ISS could reduce this risk even more (8). AGXX® is revolutionary because it has been shown to inhibit the growth of methicillin resistant Staphylococcus aureus (MRSA) (11). It also has the ability to regenerate because two coupled redox reactions occur between the silver and ruthenium (12). While the microbial composition of the ISS should be continually monitored and explored as humans prepare for more missions into outer space, new materials developed to prevent the colonization of pathogenic bacteria may protect us both in space and on Earth. 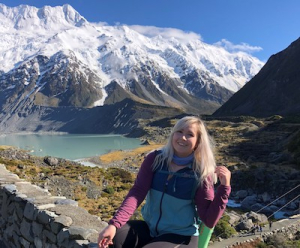 Rachel Sidebottom is a recent graduate from Occidental College in Los Angeles. Her research background is diverse, ranging from the study of hematologic spaces in shrimp to the usage of proton radiography for cancer imaging at Los Alamos National Laboratory.