A recent episode of the British TV series 'Doc Martin' dealt with a somewhat unusual bacterium. Several children in the small town in Cornwall came down with what the good doctor thought was impetigo, a highly contagious skin infection caused by staph or strep. But the lab report said that the bacterium they cultivated was completely different, Erisipelothrix rhusiopathiae. 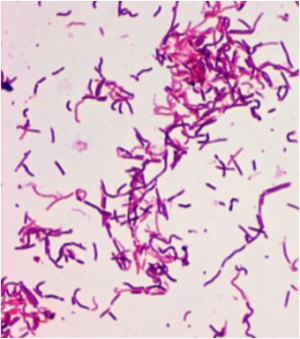 An example of the Gram-variable nature of E. rhusiopathiae. Source. Frontispiece: Erysipeloid. Source

This is a member of the Firmicutes (think Bacillus and Clostidium, although this one is not sporeforming.) E. rhusiopathiae is an animal pathogen, the agent of ery­si­pelas in pigs, other mammals, bird, fish, and reptiles. In humans, it causes a fairly mild skin disease called erysi­pe­loid, which calls for careful diagnostic because infect­ions by ß-hemolytic streptococci or staph cause similar symptoms. It's also known as 'St. Anthony's fire', and an occupational disease of pig handlers (as Roberto wrote earlier  on these pages, St. Anthony was also the name patron for another disease, caused by the fungus Clavi­ceps purpurea.) It can also cause a generalized infection and endocarditis. It was first isolated by Robert Koch in 1876. The name (as derived from the Greek) means "thread of red disease." In the TV show, the likely source was a dog.

Penicillin is the drug of choice in humans. The good doctor used it to advantage and an epidemic was forestalled, oompf. On to the next episode! There seems to be room for a microbiology consultant on British TV.