You may remember the solemn proclamation that "ontogeny recapitulates phy­logeny," meaning that during our embryological development we (and everybody else) go through the steps in our evolution. This turns out to be quite wrong, but I bring it up because it illustrates that phy­logeny denotes the history of a species or a group's evolution. Phylogenies are usually repre­sented by evolutionary trees wherein relationships between taxa are based on molecular sequen­cing or morphological differences. The term phylogeny was coined by the German embryologist Ernst Haeckel in 1866 who also fathered the above ditty. It turns out that phylogeny is a handy and widely used term. 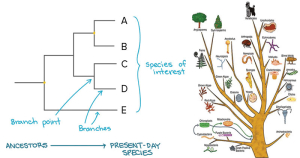 So, what is phylogenetics? Simply, it is to study the phy­logeny or evolutionary relationships of a species or group of organisms by examining their sequence. It is the handmaiden of biological systematics and taxonomy. Nowadays, phylogenetic relationships are most often determined by DNA sequences, which creates a com­fortable bridge between systematics and molecular biology. Thus, field scientists have to talk to molecular types and viceversa, a novel and desirable development. Phylogeny also allows us to determine the hypothetical common ancestor of organisms. In this case, the phylo­genetic tree is said to be 'rooted'. An example of the use of phylogenomics is the discovery that most photosynthetic eukaryotes are linked and that they may well have had a common ancestor.

A given phylogenetic tree can get completely screwed up by horizontal gene transfer (HGT), the handover of genetic material between branches. This can give a distorted picture of the phyloge­netic relationships of certain species. 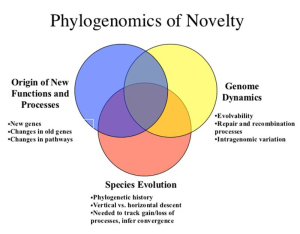 Jonathan Eisen coined this term in 1998, to address shortcomings of evolutionary studies based on gene se­quences alone. He proposed that sequence similarity does not by itself ensure similarity in function. He said that: "functional predictions can be greatly improved by focusing on how the genes became similar in sequence (i.e., evolution) rather than on the sequence similarity itself."

Phylogenomics extends the study of phylo­genetics, which deals mainly with individual sequences, to embrace whole genomes. The term is being used in various ways but generally speaking, they all involve the interaction of genomics with evolution. A fine example how the phylogenomic analysis can be used in microbiology is that of the marine genus Salino­spora. For general reviews of the use of the term, see here and here.

Broadly speaking, phylo­genomics relies on the comparison of entire genomes, whereas phylo­ge­netics compares single gene sequences to predict gene function. Consequently, phylogenomics allows to identify events in gene evolution such as duplications and deletions. It further allows to recognize genes that have been transferred by HGT.