Fancy calling a thermometer “cool"? An RNA Thermometer (RNAT) is, technically speaking, similar to a Breguet thermometer − not named after the famous French aviation pioneer, but after his great-great-grandfather Abraham-Louis (1747–1823) − in that it re­acts to changing temperatures with thermal expansion or contraction of a strip: a bi­metalic strip in Breguet's device and partially double‑stranded RNA in a "RNA Thermometer".

As you know from the "cloverleaf" secondary (2D) and the intricate, capital-L shaped tertiary struc­ture (3D) of transfer RNAs (tRNAs), RNAs are never just a linear string of ribonucleotides but fold into a various structures, often within a single molecule: duplexes, hairpins, internal loops, junc­tions and single-stranded regions (masterpieces were the elucidation of the complete E. coli 16S rRNA structure by Harry Noller & Carl Woese in 1981, and the "80% version" by Carola Glotz & Ri­chard Brimacombe, published the previous year.) To make things a tad more complicat­ed, RNA folding and hydrogen-bonding of complementary bases can and often does involve non-cano­nical base-pairing. For the "thermometer" function, RNA duplex regions are especially im­portant be­cause they react sensitively by stabilizing at lower or "melting" at higher temperatures (modulated by the presence of divalent cations as Mg2+, to not forget this.) Thus, different 2D and 3D struc­tures in a single RNA molecule are successively formed or disrupted over a temperature range and, in a messenger RNA (mRNA), translation signals as start codon or ribosome-binding site (RBS, or Shine-Dalgarno sequence) hidden or exposed. 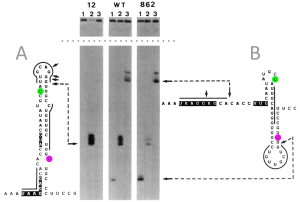 A bit of history, that of the discovery of the first RNA thermometer 30 years ago. And nobody who's familiar with the development of bacterial genetics − or has experienced it in personam − will be surprised that phage Lambda was involved. When entering an E. coli host cell, λ DNA can either "go lytic" and kill its host immediately, or integrate into the host chromosome for an indeterminate period of time (see here in STC for a brief introduction to lysogeny by Merry.) The cIII gene product of phage λ participates in the regulation of the lysogenic pathway. Amos Oppenheim and his coworkers found se­ver­al mutations in the cIII gene, two of which were located in the 5'-untranslated region of the mRNA and did not change the amino acid sequence (à propos Women in STEM: I should mention that Amos' co-authors in­cluded Shoshy Altuvia. She la­ter became a pro­fessor at the Hebrew Uni­versity of Je­ru­sa­lem, Israel, like her mentor.)

Since one of the mutations in the 5'-untrans­lated region (5'-UTR) of the cIII transcript, tor862, led to high level of expression while the other, 'mutant 12', only to low level, Al­tuvia et al. (1989) assumed that alternative mRNA structures determine the rate of cIII translation. According to their model the cIII mRNA exists at equilibrium in two alterna­tive struc­tures, A and B (Figure 1). In structure B the mRNA is efficiently translated, whereas in the alterna­tive structure, A, it is unavailable for ribo­some binding. The mutation tor862 leading to overex­pres­sion of cIII locks the mRNA in structure B, whereas 'mutant 12' leading to a low level of expres­sion lock the RNA in structure A. They tested and validated their model by various experiments, including footprinting with specific RNases and ribosome-binding assays, but here I focus on their hybridization experiments. They hybridized matching (radiolabeled) oligonucleotides to three predicted single-stranded regions, performed primer extension reactions (with deoxyribonucleo­tides), digested the products with RNase H (spe­cific for RNA:DNA hybrids), and separated the re­action products on gels. Figure 1 shows that oligo­nucleotide "3" (complementary to the Shine-Dalgarno sequence) binds efficiently to the RNA of tor862 (structure B) but does bind to the RNA of 'mutant 12' (struc­ture A). The oligonucleotide comple­mentary to the loop of structure A binds most efficiently to the mRNA of 'mutant 12' (structure A), whereas the oligonucleotide comple­men­tary to the loop of structure B shows the strongest signal with RNA of mutant tor862 (struc­ture B). Wild-type mRNA displays an intermedia­te level of binding to all three oligonucleotides. Clearly, cIII expression is controlled at the level of translation through regulation of the ratio be­tween the two alternative structures. Wild-type cIII mRNA did not show this "intermediate behav­ior" but a clear shift from the less heat-stable struc­ture B (ΔG0=−18.1 kcal/mol) to the slightly more heat-stable structure A (ΔG0=−19.6 kcal/mol) when Altuvia et al. performed RNase T1 footprinting at 37°C and 42°C. Voilá, their predicted and experi­mentally proven structure made sense to ex­plain − in part, and in somewhat shortened fashion, because with λ everything is a bit more tricky − the temperature-depen­dent switch to the lytic pathway of phage λ. Such tem­perature-depen­dent hiding or exposing of translation signals by changing 2D/3D structures in the 5'-untranslated re­gion of an mRNA is what makes an "RNA ther­mometer".

The term "RNA thermometer" was coined by Gisela Storz in a paper summarizing her efforts and those of others before to elucidate the intricate post-transcrip­tional regulation of expression of the E. coli rpoH gene encoding the heat-shock sigma factor, σ32. Isn't it cool (again, sorry!): trans­lation of a heat shock protein, which is a key regulator for the ex­pression of a whole range of heat shock proteins, is itself regulated by temperature, that is, by a thermometer in the 5'-UTR of its mRNA. We now know of several more examples across various bacterial families, which Franz Nar­berhaus characterizes in a recent review: "Typical RNA thermometers control translation initiation of heat shock or virulence genes by forming a sec­ondary structure that traps the ribosome bind­ing site (RBS). An increase in temperature to 37°C (virulence genes) or higher (heat shock genes) de­stabilizes the structure, liberates the RBS and permits formation of the translation initiation com­plex." It is not without a certain irony that of all things the first proven "RNA thermometer" works the other way round: structure A in the λ cIII mRNA is stable at 42°C and prevents its trans­lation.