The Cake-Cutting Problem in the Archaeal World

Have you ever wondered how to slice a cake in equal proportions for a large party? Hugo Stein­haus, a famous Polish mathematician introduced a mathematical way to deal with the fair cake-cutting problem after the second world war. He possibly used cakes as an abstract representation of the limited resources available during those pressing times and invented games with set rules and multiple players so that each player gets a fair share of the "cake" in question. Now, what hap­pens if we introduce geometric constraints in the cake-cutting problem? For example, does the shape of the cake, whether round or rectangular, determine the placement of the first cut for proportional distribution? This is precisely the question that Walsh et al. (2019) try to answer in two pleomorphic archaea, Haloferax volcanii and Haloarcula japonica who both cannot easily com­mit to a uniform cell shape or size. How, then, does cell shape influence the placement of division plane to partition the cell in two roughly equal halves?

The authors demonstrate that one mecha­nism for accurate placement of cell division machinery in pleomorphic archaea involves Turing patterns. Alan Turing, who intro­duced the mathematical concept in 1952 showed that introducing perturbation in the form of diffusion to a system at steady state results in spatiotemporal concentration gra­dients, giving rise to patterns in nature in­cluding skin pigmentation and animal coat, among others. Previously, Walsh et al. (2017) demonstrated that spatiotemporal oscil­la­tion of Min proteins between the two poles in E. coli cells, which restricts the formation of the cell division site to mid-cell, follows the Turing patterning mechanism. However, it is challenging to study a coupling between cell shape and division plane placement in E. coli and other rod-shaped bacteria due to inherent difficulties in generating mutants with aberrant morphologies. On the other hand, the two archaea, H. volcanii and H. ja­ponica are relatively flat and exhibit a variety of shapes. Also, while in the majority of bacteria including E. coli, the placement of the division plane is negatively influenced by the distribution of DNA within the cell, DNA in H. volcanii is more uniformly distributed throughout the cell cytoplasm, likely excluding its participation in division plane placement in archaea (Walsh et al., 2019). These factors make archaea ideal model systems to study the influence of cell shape on division site placement.

In archaea, FtsZ1, a homolog of FtsZ, the major cell division protein in bacteria with similarity to eukaryotic tubulin, is critical for cell division and localizes as a ring at mid-cell (Duggin et al., 2015). To test if division site placement follows a Turing mechanism, the authors first theoretically pre­dicted the orientation of the division plane from cell shape as the nodal plane that is least per­turbed in response to minor cell shape changes. Then, they compared it to GFP-tagged FtsZ1 visu­al­ized by fluorescence microscopy and assigned a cross-correlation score to assess the degree of agreement between the theoretical prediction and the experimental observation. The higher the cross-correlation value on a scale of 0 to 1, the higher the agreement between the two values.

Using this approach, the authors made the surprising observation that the cross-correlation value between theoretically predicted division plane and experimentally determined FtsZ1-GFP plane in H. volcanii depends on the aspect ratio of the cells (Figure 1A,B). Although the theoretical model is able to predict the FtsZ1-GFP plane with high accuracy for elongated cells with low to moderate aspect ratios (~<0.85), the model fails for circular cells that display a twofold symmetry with a high aspect ratio (approaching ~1). The authors speculated that this could be attributed to cytoskeletal elements known to influence positioning of cell division machinery in eukaryotes. However, dele­tion of CetZ1, an archaeal tubulin-like cytoskeletal protein that inhibits formation of rod-shaped cells, did not affect the relationship between mean cross-correlation and the aspect ratio of cells, suggesting that CetZ1 does not influence the positioning of the division plane in H. volcanii (Walsh et al., 2019). 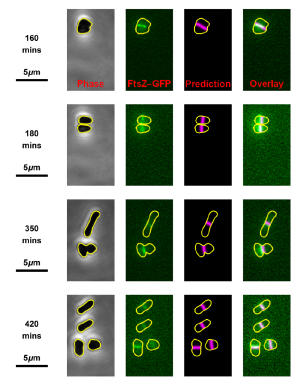 (Click to enlarge)
Figure 2. Two rounds of cell division. Four still frames (one per row) from time-lapse imaging showing two consecutive rounds of H. volcanii cell division. The left-hand images show the pha­se-contrast micrographs which were used to automatically ge­nerate cell outline (shown in yellow). The second column of images shows the FtsZ1 fluorescence (green) with the cell out­line superposed. The third column of images shows the pre­dicted division planes (magenta lines) based on the cell shape. The far-right column of im­ages is the overlay of the FtsZ1 flu­o­rescence and the pre­dicted division plane. Source

In addition, knockout of CetZ1 also increases the fraction of plate-shaped cells, including triangular cells. The authors compared the theoretically predicted division plane orien­tation to that of FtsZ1-GFP in 47 triangular cells in H. volcanii (Figure 1C). The prediction of the model fits well in ~77% of cells with a well-defined division plane. In ~25% of cells imaged, the division plane was not singularly defined by a FtsZ1 ring as "proto-division planes" formed in multiple directions (row 3,4 in Figure 1C). Similar results were ob­tained for triangular-shaped H. japonica cells. The authors argue that the slightly less robust prediction of division plane in trian­gular cells as compared to rod-shaped bac­teria could likely be attributed to the fact that triangles are more sensitive to minor fluctuations in cell shape. Moreover, even slight errors associated with tracing cell out­lines from microscopy images can lead to major changes in how the shape of the triangle is perceived for theoretical pre­diction (for instance, distinguishing between a sub-equilateral triangle and an isosceles triangle if the cell outlines are misjudged). These factors make it difficult to find a single mathematical solution with the highest score for triangular cells as compared to rod-shaped cells.

Further, the authors also investigated if the orientation of the division plane in daughter cell is influenced by the orientation of the division plane in the parent. Indeed, the division plane in daughter cells is dictated by geometry of the daughter cell alone and is independent of that of the parent cell (Figure 2). Interestingly, in one of the time lapse series, the authors observed a nearly perfect equilateral triangle, such that even small error in tracing the cell outline or change in its shape over time results in drastic shifts in theoretically predicted division plane orientation (Movie S2). However, FtsZ1-GFP is stable, with at least two rings that are orthogonal to each other and division produces three daughter cells which subsequently establish their own division plane dictated by the geometry of the new cell (Movie S1). Based on these observations, the authors propose that triangles can provide a very stringent test for prediction of division plane and in such degenerate cases as well as those of spherical cells, possibly other mechanisms may be able to explain the orientation of the division plane. Perhaps future studies to systematically manipulate cell shapes by placing cells in microfabricated chambers of defined geometry for both archaeal and bacterial cells will help elaborate these principles (Minc et al., 2011). Previously, such devices have been used to manipulate sea urchin zygotes to a variety of defined geometries, including triangular, star-shaped and ellipses in order to comprehend coupling between cell shape and division site placement (Minc et al., 2011).

Based on these observations, Walsh et al. suggest that a Turing mechanism may be primarily re­spon­sible placement and orientation of division plane in pleomorphic archaea. In that case, the system under consideration should rely on diffusion of chemical signals in order to generate gra­dients of spatial concentration. This process requires energy, which may be likely produced by proteins with ATPase/GTPase activity, the function of many of which are yet to be annotated from genomes of H. volcanii and other pleomorphic archaea. In addition to patterning by chemical sig­nals, it is also possible that gradient in mechanical forces help in the placement of a division site, such as bending forces generated by microtubule sliding that lead to beating of cilia and flagella in sperm cells (Howard, 2009). Further identification of these chemical and/or mechanical signals that regulate placement of division site based on a Turing mechanism will help us to elucidate ge­neral principles of division site placement based on geometric cues in the system. And also, this maybe provide us a more scientific way of cutting a cake fairly and squarely in our next gathering, whatever its shape may be! Kanika Khanna is a newly minted PhD from the labs of Prof. Eli­zabeth Villa and Prof. Kit Pogliano at University of California, San Diego. Her thesis project focused on elucidating molecular mechanisms of sporulation in Bacillus subtilis and those of phage replication in bacterial hosts using novel modalities in the field of cryo-electron microscopy (yet on the photo, she holds a foldscope.) Outside of lab, she finds solace in crochet­ing, 3D origami, and science outreach.