« Remembering a Remarkable Man | Main | Of Terms in Biology: Dysbiosis »

A Novel Way to Kill Your Neighbor

Ever wonder why that paradigm of bacterial signaling molecules, (p)ppGpp, uses guano­sine (G) and not some other base (is this a Talmudic Question in the making?)? To remind you, guanosine tetraphosphate, ppGpp, (or the penta­phosphate, pppGpp, the two have pretty much the same activity), is the classic bacterial "alarmone." Either one is the signal for the stringent response, the phenomenon that results in the inhibition of RNA synthesis during amino acid starvation. However, it has been known for some time that many bacteria make (p)ppApp, adenosine tetra- or pentaphosphate, which has a completely different activity. 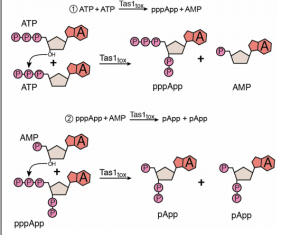 A recent paper from labs at McMaster University and MIT (the senior authors being J. C. Whitey and M. T. Laub) is likely destined to become a classic on this topic. The authors found that the enzyme that makes (p)ppApp is a toxin. (p)ppApp is not toxic by itself (and why should it be?) but making it in large amounts depletes the cell of its ATP. This has dire conse­quences on the cell's meta­bolism and leads to death by energy starvation. The (p)ppApp-making enzyme is called Tas1 (for "type VI secretion effector (p)ppApp synthe­tase 1"). It is mighty power­ful as enzymes go, one molecule being able to poly­phos­phory­late some 180,000 mole­cules of ATP per minute. So, introducing it into a new cell might well kill it. Note that this outdoes the enzyme that makes (p)ppGpp, by about two orders of magnitude, which may well illus­trate the distinction between a toxin and a metabolic regulator. 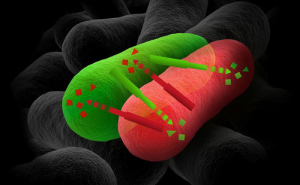 But how do you get a large protein such as this enzyme into a susceptible cell? The answer is the Type 6 sec­retion system (T6SS, which we discussed recently here.) In brief, this is an injection apparatus used by some bacteria to introduce poisonous "effectors" into susceptible neigh­boring cells. Just one minute, you say... How come the 'donor' cells aren't affected but rather escape intact? Good point. The reason is that these cells, in addition to Tas1, make another protein, one that inhibits Tas1 activity and is thus called an immunity factor. Obviously, this inhibitor is not injected into recipient cells during T6SS transfer. Such an arrange­ment is common among T6SS effectors. And, as is usually the case, both these proteins are encoded by genes located next to one another and near the genes for making the secretion apparatus.

Now for further details. First of all, is this story limited to one strain of Pseudo­monas? No. Genomic analyses show that orthologs of the gene for the toxin are also found in related Proteo­bacteria, such as other pseudo­monads, Entero­bacter, Sphingo­monas, Para­burk­holderia, and Keto­bacter. Look for future papers on this story in these and other species. It has been known for some time that B. subtilis makes pppApp and is involved in sporu­lation. Another recent paper from the University of Wisconsin tells us that a typical alarmone synthetase of B. subtills called SasA makes not only (p)ppGpp but also ppApp and AppppA. They say: "…our work shows that induction of a single (p)ppGpp synthetase can cause con­comitant accumu­lation and potential regulatory interplay of multiple alarmones." Simple it ain't.

The (p)ppApp story was further confirmed by the finding that a mutant lacking Tas1 as well as one defective in T6SS were, in fitness tests, about 40 times less competitive than the wild type. The terminal domain of Tas1 suffices to inhibit the growth of E. coli, three molecules per cell being enough, in keeping with the high activity level of this enzyme.

The gene for the Tas1 toxin is only remotely similar in sequence to the one for making (p)ppGpp but it is quite structurally similar to the synthetic domain of that of such unrelated species as B. subtilis and S. aureus. The immunity protein, here called Tis1, distorts the toxin-making protein, rotating two of its alpha helices by about 30o, thus inhibiting its activity.

So, how does Tas1 do its killing? Does it indeed cause the depletion of ATP in the recipient? The amazing catalytic power of this enzyme predicts that the ATP con­centration in the recipient would fall by about 0.6 mM per minute, which is fast indeed. When the authors measured the activity of Tas1, the levels of ADP and ATP in the affected cells fell rapidly but the AMP level remained unchanged. What happens in the donor cells in mutants lacking the inhibitor? Here too, ADP and ATP levels dropped and those of (p)ppApp increased. Despite the molecular similarity of the two com­pounds, the action of (p)ppGpp is clearly bacterio­static, that of (p)ppApp, bacteri­cidal.

Depleting a cell of its ADP and ATP has pleio­tropic effects, such as those due to the collapse of the proton motor force (pmf). Depletion of ADP should increase the electro­static potential across a Gram-negative inner mem­brane. In agree­ment with this, the addition of a pmf uncoupler, the ionophore CCCP, indeed reduced Tas1 toxicity. The authors also examined the effect of ATP depletion on a number of metabolic functions, finding that in these cells there was a marked decrease in the metabolites involved in many essential pathways (for example glycolysis, the TCA cycle, the pentose phosphate pathway, lipid, amino acid, purine and pyrimi­dine bio­synthesis, among others). Thus, the bactericidal action of Tas1 is due to the depletion of ADP and ATP, which leads to the decrease in the level of many essential metabolites.

The authors further asked if (p)ppApp may act by binding directly to protein targets. (p)ppGpp does indeed bind to a purine biosynthetic enzyme, PurF. It does so, as seen by examining the 3-D structure of PurF with (p)ppApp or (p)ppGpp bound to it. Since (p)ppGpp targets some 50 proteins, it is likely that (p)ppApp does as well, which would enhance its toxicity.

The results reported in this paper augment the repertory of social inter­actions between bacteria. The conversations they carry out can be beneficial to both, or to one only, as is the case for this Pseudo­monas. Either way, no bacterium is an island.