« Teachers Corner: Where have all the protons gone? | Main | The Streptococcal Wolf in Sheep's Clothing » 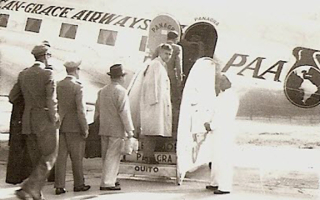 This sepia toned photograph was taken on January 6, 1950. That's Elio in the light toned overcoat, looking over his right shoulder and standing on the first step of the ladder and about to enter a Panagra DC-3. That the flight is about to depart Quito (Ecuador) is evident from the inscription at his feet. However, the image does not reveal his destination. But here's a clue. The night before his flight, Elio went to the movie theater to watch The Wizard of Oz.

One can only imagine what must have been stirring in his mind as Dorothy sang Over the Rainbow in the black and white Kansas setting. Or when he heard the phrase, as the scenes turn colorful: "Toto, I've a feeling we're not in Kansas anymore." While Dorothy left Kansas to go over the rainbow, Elio was headed to Kansas on a new adventure to begin graduate school.

This flight by the twenty-one-year-old adventurer marks both the end of Part 1 and the beginning of Part 2 of Elio's memoirs. In Part 1 Elio shares with us his growing up as a Jew in pre-War Italy, his family's escape to Ecuador when he was twelve, and the ensuing formative decade. Elio wrote this first installment at the turn of the century because he believed that his "first twenty or so years of life were a bit unusual." This bit of an understatement is, of course, characteristic of Elio's modesty. While a link to Part 1 could be found in the STC site since 2012, it was not an easy find. Again, his modesty shows. Now I've moved the link to a more prominent location on our home page.

In the Preface to Part 1, Elio states: "Some day, if the spirit moves me and my joints permit it, I may write more." Well, his spirit has moved him, and his joints have allowed it. We now have access to Part 2. In it Elio gifts us with the rest of the tale, from departing Ecuador and arrival in Kansas, to his present life in San Diego. Oh, what a marvelous journey that has been, one that has touched so many of us! Dear reader, here is your access to the entire, wonderful saga. (Remember this as well: a Google search for "Elio's memoirs" will also get you there.) Many many thanks Elio!