The evolutionary trajectories of bacteria are greatly influenced by their reproductive suc­cess in changing environments. Of course, this is not just about how fast bacteria divide when con­ditions permit growth but also how well they survive in the absence of growth. In addition, an im­portant determinant of the overall fitness of a bacterial lineage is its ability to colonize different environ­ments. Indeed, bacteria have evolved remarkable and diverse strategies to explore new en­viron­ments. As the saying (almost) goes, when the going gets tough, the tough bacteria get going (to different places, that is).

Prime among bacterial strategies to find greener pas­tures are their diverse motility mechanisms, be it flagellar motility that allows them to swim through goo, or one of the surface-dependent mo­vements such as gliding or twitching. But what about non-motile bacteria? Some of these have the ability to disperse, say, through the formation of spores that can be carried off to distant locations by the wind, water currents and on the bodies of animals. The members of the genus Streptomy­ces are among such spore-formers and I recently described how they utilize geosmin to lure in­sects to aid in their dispersal. And Christoph reported on how cleverly Streptomyces employ mo­tile bacteria, namely Ba­cillus subtilis, to transport their spores. It turns out that many Streptomy­ces have yet another card up their sleeve. Even though these bacteria do not have a motility ap­paratus, they can still explore vast regions. How do they do it? It's whole new story. 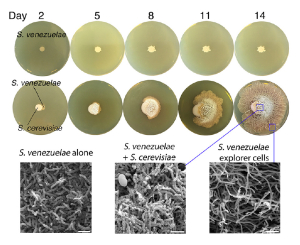 This fascinating story did not start with investigators in­tent on finding a novel form of how bacteria colonize new territory. Rather, it started with a surprising observa­tion that was then rigorously studied, leading the authors to a full explanation. This work was published by Stepha­nie Jones and colleagues, with Marie Elliot, from McMas­ter University, Hamilton, Canada, as senior author. Most of what we have learned about Streptomyces growth and development comes from studies carried out with pure cultures. Yet, we know that in their natural settings these bacteria (like all others) live in the pre­sence of other mi­crobes. As an initial step in understand­ing how Strepto­myces growth and development might be affected by the presence of a fungal species, these inves­tigators co-cul­tured Streptomyces venezuelae alongside the common yeast Saccharomyces cerevisiae on YPD, a medium com­monly used for growing fungi. (Two things about YPD for the uninitiated, the "D" stands for dextrose, dextrose being another name for glucose. And there's a lot of glucose in YPD. This becomes important in the story.)

Figure 2. S. venezuelae explorer cells grow­ing up a rock em­bed­ded in agar (left), and over a poly­sty­rene bar­rier with­in a div­ided petri dish (right, and schem­atic below). Source

The result of this co-cultivation provided a big surprise (Figure 1). When S. venezuelae was grown alone on YPD plates, growth was restricted to the site of inoculation even after 14 days. In striking contrast, in the presence of S. cerevisiae the bacteria spread over the entire area of the plate. The rate of expansion of the leading edge of these rapidly migrating cells was ten-fold faster than the rate of hyphal tip extension of these fila­mentous bacte­ria! Wow! What's going on? Imaging of the cells using scanning electron microscopy revealed that the morpho­logy of the bacteria in the rapidly expanding areas was drastically changed from typical hyphae, their filaments were much thinner and they did not branch. To gain some insight into the mechanism of this phe­nomenon, the authors relied on the knowledge gained from prior work on the development of aerial hyphae and spores by Strepto­myces. They tested several mutants defective in these well-studied developmental processes. None of them was affected in the ability to colonize large areas when grown in the presence of S. cerevisiae. This type of growth was clearly distinct from the developmental stages studied before, thus they had discovered a new aspect of Streptomyces biology. The authors dove right into it. Incidentally, this behavior was not unique to this one species, about 10% of the Streptomyces species they tested displayed this phenotype. 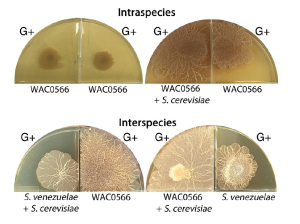 The robustness of this behavior is quite striking (Figure 2). The expanding layers of cells not only cover areas of the growth medium rapidly, they are also great climbers, able to go over small rocks and plastic barriers! The authors named this behavior exploratory growth and refer to the cells as explorers. These cells remind me of Super­man: "Faster than a speeding bullet! More powerful than a locomotive! Able to leap tall buildings at a single bound!" These explorers are indeed Super-Streptomyces.

To understand the role played by the fungus S. cerevisiae in inducing exploratory growth, the authors screened the collection of 4309 strains containig single gene knock-outs. Indeed, they found some mutants of S. cerevisiae that no longer induced exploration in S. venezuelae. Half of these mutants were defective in steps of the tricarb­oxylic acid cycle (TCA) that follow the production of ci­tra­te. Such mutants would be expected to accumulate citra­te and other organic acids. Realizing that YPD contains a lot of glucose and knowing the connection between gly­colysis and the TCA (thus the importance of knowing me­tabolism!), the authors tested both the consumption of glucose and the pH of the YPD medium before and after growth of wild-type S. cerevisiae and TCA cycle mutants. All strains consumed the glucose. But growth of the wild type led to an increase in the pH while the mutants lowered the pH of the medium, perhaps due to the secretion of citrate or other organic acids. These results pro­vid­ed the clue to the role of the fungus: eat the glucose and raise the pH. Some­how glucose re­presses exploration, so when the fungus consumes the glucose, exploration ensues. This is per­haps not surprising, why go exploring where there's plentiful food around? The stimulation of ex­ploration by alkaline pH is more mysterious. From exploration-defective mutants of S. venezuelae along with transcriptomic analyses, the authors conclude that both an alkaline stress response and amino acid catabolism are involved in stimulating exploratory growth. Impor­tantly, by remov­ing the glucose from the YPD, S. venezuelae explored even in the absence of the fungus. It turns out, S. venezuelae on its own will alkalinize the medium so long as there is no glucose around. Then it's off and running to explore new territories.

When you think about it, this makes perfect sense. Once you remove the glucose from YPD, what is left? Yeast ex­tract (Y) and peptone (P), both great sources of amino acids and peptides. And when bacteria grow on these substrates, they release lots of different amines that will increase the pH. What was amazing about these results is that the medium was turned alkaline by a volatile com­pound! This means that an exploring Streptomyces sends an airborne cue that can be sensed by other Streptomy­ces to begin exploring themselves! This is evident from the results shown in Figure 3, where the agar is separa­ted by a plastic barrier but air still ex­changes between the compartments. What is the volatile com­pound re­sponsible for this aiborne cue? Iden­tifying it was no easy task, initial analyses identified 1,400 volatiles from the cultures of these bacteria! But after some rigorous fil­tering, the authors arrived at a most likely candidate: tri­methylamine (TMA). Indeed, addition of pure TMA both raised the pH of the medium and induced exploratory growth.

Exploratory growth is a new aspect in the overall life cycle of the Streptomyces (Figure 4). As the authors state: "When grown next to yeast, explorer cells emerge from a mass of sporulating cells. This functional differentiation represents an effective bet-hedging strategy, whereby spreading explorer cells scavenge nutrients for the group, while the sporulating cells provide a highly re­sis­tant genetic repository, ensuring colony survival in the event of failed exploration." Bacteria will never cease to amaze us with their clever survival strategies!