Outdoors the air was crisp, as it should be for a late Oc­to­ber even­ing in Maine. In­doors, with lit logs crack­ling in the fire­place, the twelve of us sat fully ab­sorbed in the nar­ra­tive spok­en by our spe­cial guest. The soft tone of his voice, the sparkle in his eyes, and his joy­ful smile framed the story­telling per­fect­ly. That even­ing, this gentle man relived his childhood memories, generously giving of himself, something that always came natural to him. W­e heard of the ever curious fourth grader growing up in a small house in Pennsauken, New Jersey, with an ornery goat in the back­yard. Caring for the unfriendly animal was no joy at all! No surprise then that when Louis Pasteur's biography landed on his lap, he read it with vo­racious enthusiasm; particularly thrilling to him were the paragraphs describing Pasteur's use of goats as experimental animals. Right then and there was born his undying love for microbiology. In his own words, "That's why I am a microbio­logist." It was October 1998, my lab had gathered for our yearly week-long retreat at the Howells House in Kittery Point, Maine. And our special guest was Harold Amos, the first Black microbiolo­gist to chair a Department at Harvard Medical School. But to those of us fortunate enough to have him as a friend, Harold was much more than that. 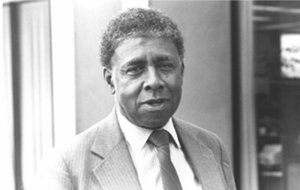 From such humble origins, the reluctant goat-rearer and avid reader grew into the man that would make history at Harvard Medical School. After receiving his early edu­cation in segregated schools, Harold graduated first in his class from Camden High School. That earned him a full scholarship to Springfield College in Massachusetts from where he graduated Summa cum Laude in 1941. World War II interrupted his education, but his service in France turned him into a life-long Francophile. After the end of the war Harold joined the Ph.D. program of the Division of Medical Sciences at Harvard Medical School (a Division which we would later direct for many years) and became the first Black to earn a doctoral degree from the Division, working on agents affecting herpes virus infectivity. Lured by France and supported by a Fulbright fellowship, he did his postdoctoral training at the Pasteur Institute working on the genetics of methionine biosyn­the­sis with Georges Cohen. He returned to Harvard Medical School to join the faculty, where he re­mained active as a researcher and a teacher for nearly fifty years and became the first Black Chair­man of a Department at the Medical School. All along, Harold was an advocate for promoting di­versity at all ranks. After becoming Professor Emeritus in 1988, he accepted the charge of being the first national director of the Minority Medical Faculty Development Program (MMFDP) of the Robert Wood Johnson Foundation. In his honor, this program was renamed the Harold Amos Me­dical Faculty Development Program in 2004.

My friendship with Harold lasted from the day I interviewed at Harvard Medical School in 1982 un­til his death on February 26, 2003. Throughout those years we shared wonderful stories over ma­ny espressos and even more glasses of wine. For such an influential figure during his lifetime, his modesty was exemplary. This week many are joining "Black in Microbiology: A Vibrant Celebration of Black Microbiologists." Here at STC, we are proud to contribute to this celebration by honoring the life of Harold Amos.

(I chaired the committee that wrote Harold's Memorial Minute at Harvard Medical School. I hope you will find the time to read it.)