Teachers Corner: Where have all the protons gone?

Learning is complicated. To anyone involved in teaching, it is apparent that students learn in diverse and often mysterious ways. It has even been said that one never really learns something until one has to teach it! What can I say about learning? Let me pipe in. I never received formal training in education. I offer you instead some personal experience. I arrived in the United States not really sure what I had learned in secondary school − apparently enough to not feel utterly out of place in a university. However, when it came to my understanding of some new basic principles, I experienced a huge disparity. Thus, when I was presented with the structure of DNA along with graphic representations of the processes of replication, transcription and translation, the whole thing made perfect sense. I had the feeling that "I knew that already," even though I had not seen it before. In sharp contrast, when presented with the remarkable fact that aerobic respiration involves the conversion of glucose and oxygen into carbon dioxide and water, I was lost. Understanding that process… let's just say it's taking longer. I remember seeing the equations, the ΔG = −686 kcal/mol, and the large yields of ATP. But I have no recollection of ever learning how ATP was made during my years at university. Perhaps I should not be blamed, as I entered university in 1971. 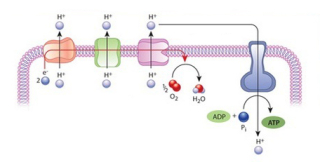 Figure 1. A greatly simplified graphic of how protons are moved from the inside to the outside of the cell via the electron transport chain and how the re-entry of those protons is coupled to ATP synthesis. Diagram modified from Source. Frontis­piece: The movement of ions across a mem­brane and down a con­cen­tration gra­dient is at the heart chemi­osmosis. Adapt­ed from Source

Wind the clock further back, ten more years, to the early 1960s. Pete Seeger's 1955 song "Where have all the flowers gone?"− from which come the lyrics quoted above − was becoming popular, in no small part thanks to Marlene Dietrich's interpretation in German (Sag' mir wo die Blumen sind) which she sang in Israel, a fact of some historical significance. Around the same time, July 1961, Peter Mitchell published his landmark paper on chemiosmosis. He proposed the then revolutionary idea that the flow of protons across the membrane (down their concentration gradient) was coupled to the synthesis of ATP. But new ideas are often slow to take hold in science, and chemiosmosis was no exception. The battle for its acceptance went on for at least fifteen years. No surprise then that it was not part of my university training. I arrived in the United States, in the waning years of the Vietnam war, which led me to quickly learn the lyrics of Seeger's song. But I did not learn the concept of chemiosmosis until graduate school, in 1976, thanks to a course on membranes taught by Milton Saier. The mysterious generation of ATP from the oxidation of glucose to carbon dioxide and the reduction of oxygen to water gained some sense in my mind. The movement of electrons, from reduced molecules – for example NADH – to a terminal acceptor such as oxygen, powers the movement of protons across the membrane from the inside to the outside of the bacterial cell. The greater concentration of protons outside gives rise to movement of protons back inside (the proton motive force) that allows the transmembrane synthase to make ATP. It was all so clear! At its most simplistic, as presented in Figure 1, it is both a thing of beauty and a process whose basic principles should be relatively straightforward to teach and to learn.

Have I finally learned all aspects of chemiosmosis? Not really. Some details have remained puzzling and to this date I continue my attempts at understanding them. When it comes to readings about bioenergetics, I've been greatly guided by the writings of Frank Harold. Initially, by his 1986 textbook "The Vital Force: A Study of Bioenergetics." More recently, by his 2001 historical treatment of the theory of chemiosmosis in a beautifully written essay entitled "Gleanings of a chemiosmotic eye." (Coincidentally, one of Frank's contributions to STC, "Getting a Handle on Cell Organization," was posted on this date in 2009. Call this post an anniversary celebration.)

It all seemed so wonderfully simple when I first came across chemiosmosis in Saier's course. Then I started to think, probably some of the very same thoughts that gave rise to the slow acceptance of the original proposal. Primary among my naïve concerns was the fate of the extruded protons. "Where have all the protons gone?" I imagined that once in the extracellular milieu (or the "bulk phase" as it often referred in biochemistry) those protons would diffuse away, scarcely making a difference to the total proton concentration of the medium. In my mind, this question grew in parallel with my growing interest in microbial diversity. The world was not all Escherichia coli and, in particular through reading the work of Terry Krulwich, I learned of the fascinating lives of alkaliphiles – bacteria able to thrive in high pH environments, even at pH values of 12−13! How on Earth could such a bacterium put out enough protons into the bulk phase to generate a higher proton concentration outside than that found inside the cell? Where are those translocated protons really found? That led me to discover some fascinating experiments that determined the time that protons take to enter the bulk or move long distances along the membrane were measured. Strikingly, the movement of protons into the bulk phase appeared to be about an order of magnitude slower than their movement along the membrane surface. The immediate take-home message was that the protons involved in the proton motive force might be somehow localized to the membrane surface, perhaps associated to the negative charges of the phospholipid head groups. There is also the question of the protons themselves. Our simplified diagrams almost invariably depict them as H+. Yet we all learned that free protons in aqueous solutions are rare. Rather they associate with water molecules to yield hydronium ions (H3O+). "Where are the protons?" and "How are the protons?" are questions that linger in my mind. You see why the simple diagram of Figure 1 does not do justice to what might really be happening in the living cell. In general, I feel comfortable teaching the simplistic view of chemiosmosis, but it is important to recognize that there are aspects of the process which we do not yet understand. 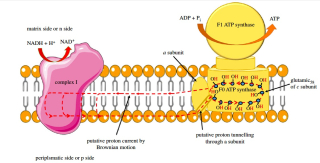 Figure 2. A possible H+ circuit inside res­piring membrane. The phosphate groups of phospho­lipids on both sides of the mem­brane are shown by brown spheres. The image pro­poses that the H+ (red dot­ted line) are trans­ferred to the Glu58 (E58) at the cen­ter of sub­unit c through sub­unit a of ATP syn­thase by pro­ton tun­neling. H+ would flow from the peri­plasmic side, always bound to phos­pho­lipid heads. This can be arranged in each layer of the mem­brane. Source

With those questions in mind, I read a recent paper on the subject that suggests that chemiosmotic theory could use an update. I was glad to learn that I was not alone in my lack of a clear understanding of such a fundamental process in biology. Mind you, this is not an easy read. The authors present how the thinking in the field has evolved but often the only way to understand their point is to either already know the relevant literature or dive fully into reading the original papers. Which to someone like me, with little or no expertise in the experimental approaches and the theoretical considerations, is a mighty big task. Still, I was thrilled by what appears to be the main message of the review. The authors propose what I see as a heretical new possibility. I am not sure I buy into it, but it is certainly thought provoking. And I certainly love such a challenge. I am curious if the true chemiosmosis aficionados outright dismiss it or see it as a viable alternative. I welcome their feedback. What is this new possibility? That protons move on the surface of and then inside the membrane! (Figure 2). It left me scratching my head and thinking: I still have got a lot to learn to be able to critically evaluate this proposal.

Where have all the protons gone? Whether they've gone to the bulk phase, or along the surface of the membrane or even through the membrane, the circularity of their route with the concomitant synthesis of ATP is something to behold. Science has taught us a huge amount, about respiration and about so much else! This has become particularly apparent in these unprecedented times of the COVID-19 pandemic, where the growth of knowledge has been unparalleled. But, as humanity, have learned what science has taught us? When will we ever learn? When will we ever learn?