The Streptococcal Wolf in Sheep's Clothing

Folklore across cultures is replete with images of skin- or cloak-based disguises. In Scottish myth­ology, the selkie can alternate between seal and human forms by means of a seal­skin. In Norse myth­ology, the goddess Freyja has a cloak of feathers that can ferry her between human and falcon forms. The Aztec deity Tezcat­lipoca sometimes wore a jaguar skin to disguise himself. Sneaking into the ranks of such myth­ological figures is the more tangible and much smaller Group A Strepto­coccus (GAS, aka Strepto­coccus pyogenes), cloaked via a similarly shifty stratagem.

As an efficient pathogen, GAS is a weighty burden on human health. This strepto­coccus is the pathogen behind diseases that range from minor offenders like strep throat to serious conditions like necro­tizing fasciitis, altogether totaling 700 million infections and over 500,000 deaths annually. One reason for this infectious efficacy is steeped in deceit. It turns out that GAS co-opts pieces of red blood cell membranes to camouflage itself from the immune system, using a particularly tricky, sticky protein.

A collab­oration between the LaRock lab at Emory and the Zhang and Gonzalez labs at UCSD identified this protein, via a trawl through GAS culture super­natant for proteins that bind to red blood cell membranes. By adding nano­particles coated with red blood cell (RBC) membranes to GAS culture super­natants and then performing affinity-capture and mass-spectro­metry, Wierzbicki et al. plucked out a protein highly conserved among strepto­cocci. This 'S protein,' encoded by the genetic locus ess, is 158 amino acids long with a hydro­phobic region at the N-terminus and a peptido­glycan-binding motif at the C-terminus. It was found both cell-associated and in culture super­natants.

Although overnight cultures of both wild-type and comple­mented Δess GAS (ess supplied on a plasmid) aggregated into clumps and settled at the bottom of the tubes, mutants lacking the S protein were instead dispersed through the medium. Between this observed dispersion and the finding that Δess strains bound less n-hexa­decane, Wierzbicki et al. concluded that the protein was modulating cell surface hydro­phobicity. Moreover, the lack of S protein increased phago­cytosis by macro­phages and extra­cellular killing by neutro­phils. In one crafty way or another, the S protein clearly has a pivotal role in GAS cell surface properties and interaction with immune system cells.

Figure 1. (Panels L and M from Wierzbicki et al.'s Figure 2) (L) A comparison between wild-type, Δess, and trans-complemented Δess strains, pelleted after incubation in either PBS or a solution of 2% lysed red blood cells. (M) A significant decrease in GAS internalization by macrophages in the Δess strain compared to wild-type and complemented strains. Source. Frontis­piece: Top panel of the graphical abstract.

We move onto unraveling the how. Several lines of evidence suggested that S protein is implicated in disguising GAS, that is, cloaking GAS in RBC membranes in a feat of molecular mimicry that conceals the bacteria from the host immune system. Firstly, Δess strains bound RBC-coated nano­particles less frequently than both wild-type strains and comple­mented Δess strains. Secondly, incubation with lysed RBCs resulted in only a faint pink color as opposed to the bright red of wild-type and comple­mented strains. This indicated a link between lack of S protein and less binding to membrane fragments. The RBC-coated WT and comple­mented strains were also less likely to be internal­ized by macro­phages than the mutant – the membrane-masquer­ading was indeed fooling the macro­phages. 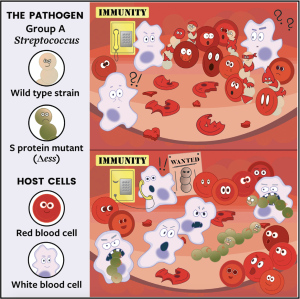 Next, profiling the protein composition of GAS lacking S protein revealed perturb­ations in both membrane and intracellular proteomes and virulence. Without S protein, key virulence factors such as M protein were down­regulated, GAS virulence was attenuated, and inoculated mice exhibited a more robust immune response and immune memory. Thus, S protein is the moon­lighting agent behind both membrane co-opting and broader proteome regulation, and GAS is the wolf in sheep's clothing of the microbial world.

Taking advantage of cell membrane-coated trickery is a specialty of the Liangfang Zhang lab at UCSD – a manipulation of manipulation that actually predates the 2019 Wierzbicki et al. paper. The Zhang lab first unveiled their red blood cell membrane coating technology in a 2011 paper titled "Erythro­cyte membrane-camouflaged polymeric nano­particles as a biomimetic delivery platform." They demonstrated that putting nano­particles in membrane coatings reduced clearance and macro­phage uptake, thereby opening up avenues for thera­peutic agents with longer systemic circulation times. Since then, the lab and others have produced a panoply of variations on the membrane-coated theme. 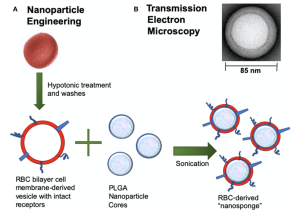 Figure 3. A schematic illustrating the nanoparticle fabrication process, encap­sulat­ing PLGA cores in red blood cell mem­branes (A), and a TEM image of the final pro­duct (B). Source.

Membrane-coated subterfuge has found its way into a series of collab­orative efforts with the Nizet lab at UCSD. RBC membrane-coated nano­particles have, in an ironic twist, been deployed against GAS itself, acting as "nano­sponges" to sop up the pore-forming strepto­lysin O virulence factor. The nanoparticles have also been used against Group B Strepto­coccus (GBS), a similarly pathogenic relative of GAS. The primary pore-forming toxin produced by GBS is β-hemolysin/­cytolysin (β-H/C), which, as the name suggests, pokes deadly holes into cell membranes. The nano­sponges sopped up β-H/C and reduced hemolysis by GBS. The membrane-masquer­ading has not been limited to RBCs, however: there has also been a macro­phage variation on the theme, with nano­particles coated in macrophage membranes that bind and neutralize E. coli endo­toxins to put a stopper on sepsis.

Typically, these artificial membrane constructs involve disguising bacteria-curbing compounds from the bacteria, but the tables have also been turned. One group camou­flaged E. faecalis, S. aureus, and S. typhimurium themselves with cell membranes to create "stealth bacteria" for bacteria-based thera­peutics (an area that seems a bold take on Paracelsus's adage, "all substances are poisons… and the right dose differen­tiates a poison from a remedy"). With an extruder device, they pushed a mixture of their bacteria and red blood cell membranes through a porous membrane to pop cell membrane jackets onto the bacterial cells. Taking a page from GAS's pathogenic book clearly has wide-ranging applications.

On Thursday, we continue the Strep pyogenes theme with another highlight of a repurposed tool for pathogen­icity. Stay tuned…