A Short History of Yogurt 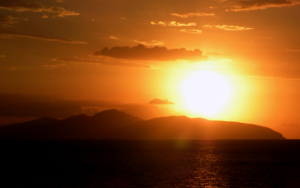 Rumor has it that the combination of yogurt and honey is the "food of the gods." I can't vouch for that since I have not had the chance to query the gods about their diets. Yet just the other day, while enjoying artisanal Greek-style yogurt topped with local raw honey, I closed my eyes and was immediately transported to an idyllic is­land. Along with the delicate texture and lavish taste of the food, I felt the first rays of light warm my face as the sun rose over the Mediterranean. My first reaction: write a post on yogurt for STC. I was not sure if we'd already written one, so I searched our records. Nothing came up. Impossible as it may seem, among our more than fifteen hundred posts I could not find a single one dedicated to this quintessential microbial food. It was high time to get on it. Which microbes make yogurt? What's yogurt's history? Whence its popularity? Where to start from among the many yo­gurt stories that can be told? In the beginning…

Human consumption of fermented milk likely goes back thousands of years to the dawn of civili­zation, when milk-producing animals were first domesticated. The reason seems obvious, without refrigeration milk will quickly spoil. There's no way of knowing what microbes were present in those early dairy concoctions but we can be certain they were dominated by lactic acid bacteria (LAB). Traditional methods to ferment milk evolved into many different foods, for example kefir, kumis and, of course, yogurt. One thing they have in common, all are based on the physiology of LAB. The copious amounts of lactose present in milk favor LAB growth because these bacteria are very good at using that sugar. As a product of lactose catabolism, LAB secrete lactic acid and acidify their environment. This prevents the growth of many other microbes and LAB come to dominate the community. The acidification also leads to the denaturation of milk protein (mainly casein). The milk curdles. Among the many fermented milk foods, yogurt stands out because it was the first to be subjected to scientific scrutiny. Identification of the yogurt microbes goes back to just a few years after Robert Koch pioneered pure culture techniques. 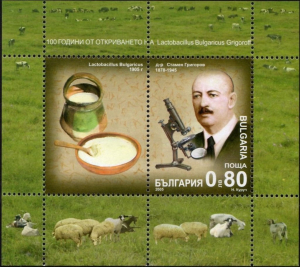 What country do you identify with the origins of yogurt? You likely answered Bulgaria. If so, you are right. But you could have said Greece. Why not? We constantly praise Greek yogurt. Or Turkey, after all the word yogurt is Turk­ish. But the story of the origins of modern yogurt starts in Bulgaria and it involves a name that you might not have heard in your introductory microbiology course. For cen­turies, perhaps millennia, the peoples of the Balkan coun­tries consumed home-made yogurt. It was no sur­prise then that a young Bulgarian, Stamen Grigorov, took a pot of the stuff with him when, at the turn of the twen­tieth century, he set off to Geneva to study medicine. His keen interest in the budding science of microbiology led him to characterize the microbes in his yogurt. In 1905 he published the description of a coccus and a rod found in yogurt, both able to produce lactic acid, in an article you will not find in a PubMed search: "Étude sur une lait fermentée comestible. Le 'Kissélo mléko' de Bulgarie" in the journal Revue Médicale de la Suisse Romande, published in Ge­neva. To honor its country of origin, the rod-shaped bacterium was initially named Bacillus bul­ga­ricus (later re-named Lactobacillus bulga­ricus and now, more correctly, Lactobacillus delbrueckii subsp. bulgaricus). The coccus was to be named later: Streptococcus thermophilus. (By the way, studies on phage resistance of S. thermophilus would lead to a key discovery in the CRISPR story, but that is food for a future post.) There were likely many other microbes in Stamen's yogurt, but the world was set on pure cultures then and dealing with a mixture of two species was at the limit of what was tole­rated. As a consequence, modern yogurt was born: inoculate previously boiled milk with these two bacteria and in­cubate the mixture at warm temperature (42°C is best). Like magic, you'll have yogurt. Strain that pro­duct over cheesecloth and you'll have Greek-style yogurt.

You might not have heard the name of Stamen Grigorov before, but you certainly know that you can find yogurt at your local grocery store. This would not have been the case had it not been for another scientist, Elie Metchnikoff, the well-known "father of natural immunity" who discovered phagocytes in the 1880s. However, by 1908 when he was awarded the Nobel Prize for his contri­butions to immunology, his interests had shifted to aging and longevity. In particular, Metchnikoff believed that aging was the result of microbially-mediated intestinal putrefaction (protein break­down) and that lactic acid would slow this decaying process by inhibiting the growth of putrefying bacteria. He likely was aware of Grigorov's work on yogurt and connected that with the high pro­portion of Bulgarian centenarians. Foreshadowing the field of gut microbiome manipulation through the use of probiotics, so much in vogue today, Metchnikoff believed that daily yogurt con­sumption prolonged life. While some of Metchnikoff's ideas were a bit on the wild side, for ex­am­ple, he maintained that the human colon was a vestigial organ, you can thank him for the po­pu­larity and ubiquity of yogurt. 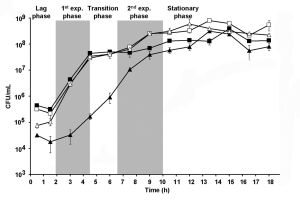 Studying mixed cultures of L. bulgaricus and S. ther­mo­philus makes for wonderful microbiology and explains why these two come to dominate milk fermentations carried out at 42°C (Fig. 3). The first thing you will notice in the graph is something that will make Elio very happy, the authors present the growth data on a semi-log graph! Second, please note the remarkably faster growth of L. bulgaricus and the greater yields of both bacteria in the co-culture (open symbols). This is a classic example of protocooperation, a particularly neat form of mutualism. Neither organism depends on the other for survival, but when grown together they both perform much better. What is going on? It's a complex interaction but here's the short ver­sion of the story. S. thermophilus requires several amino acids for growth but it lacks proteases to degrade the milk protein that could supply them. Fortunately for S. thermophilus, L. bulgaricus has a membrane-bound protease that degrades the milk protein, generating the much needed amino acids for all to share. In turn, S. thermophilus releases formate and carbon dioxide which greatly increase the growth of L. bulgaricus.

Were these two bacteria always hanging around in milk? Probably not, and this is another neat story of the Bulgarian origin of yogurt. Traditionally, yogurt starter cultures were made by placing a branch of certain plant species into boiled sheep's milk and incubating at warm temperatures. Following this lead, Michaylova et al. reproduced this method of yogurt making by using plants from Bulgaria. This way they isolated S. thermophilus and L. bulgaricus from the fermented milk. The properties of yogurt made from those strains turned out to be indistinguishable from yogurt made from industrial strains, suggesting that Bulgarian plants could indeed have been the original source of the bacteria in yogurt.

I end with the "big" question, does eating yogurt really prolong life? Who knows, Metchnikoff did not reach 100. He died of a heart attack at 71. Is yogurt at least a good probiotic? Does it improve health? There is some evidence that yogurt consumption improves the health of individuals with lactose intolerance, but as to whether it improves the health of already healthy individuals… Well, there's still a lot of discussion of just exactly what that means and how one would measure it. The fact is that while the yogurt bacteria survive transit through the human gut, they do not seem to colonize it very well. Does it really matter? To me, not necessarily. I take particular delight in a breakfast with yogurt and honey because it transports me back to that idyllic island. If you are wondering if that island is Spetses, yes it is. And by the way, there the tzatziki with ouzo at sunset is to die for!