A Whiff of Taxonomy – The Apicomplexa

The phylum Apicomplexa encompasses a large number of obligate intracellular parasitic protists, including the Plasmodium of malaria, toxoplasma, cryptosporidium, coccidia, and many others. They cause common serious diseases in humans and animals, and they thus belong to the list of important pathogens. Keep in mind that some 300 million people worldwide are infected annually with malaria and that about 1 million die of it. 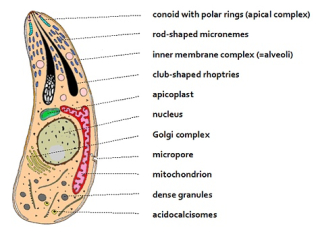 (Click to enlarge)
Figure 1. A schematic diagram of an Api­complexa. Source. Frontispiece: Mono­cystis, a mem­ber of the phy­lum Api­com­plexa. Source

Apicomplexa get their name from an intricate set of structures at one cell end, the apical complex. This consists of a bunch of microtubules and secretory elements, some with specific names such as the micronemes and the rhoptries. Additionally, a special organelle, the apicoplast, contains its own DNA and is thought to be derived from chloroplasts.

Apicomplexa undergo a complex life cycle, inducing sexual and asexual stages, usually in more than one host. Think about mosquitoes and people in malaria, or cats and non-felines in toxoplasma. Many Apicomplexa have a spore-like environmentally resistant structure, the cyst.

Successful binding to their definitive host requires movement of these organisms in and out of host cells. They use a kind of motion called gliding motility, which, unlike ameboid motion, does not involve cell deformation. In the Apicomplexa the motion is conveyed by a structure called the glideosome, which consists of a special kind of myosin called MyoA, plus some auxiliary proteins that span the space between the two membrane systems of these organisms and push against an actin filament. The rate of motion is several microns per second.