Having the bow and arrow might not be enough...

...you got to have the proper poison too!

Two years ago, Christoph told the crime story 'Dial "V" for Murder' of how vibrios kill each other. And there he focused on the murder tool, the type VI secretion system (T6SS). As it turned out, it is not just a simple bow & arrow, but a bit more complicated. More recently, Elio presented in these pages a novel use for the Type VI system, to inject a toxic enzyme into unsuspecting neighbors. Today our guest author is writing a continua­tion of this crime story...

Daily challenges in the life of microscopic organisms are not that different from those experienced by cheetahs and gazelles in the savannas. Bacteria are usually embedded in communities where they need to actively compete for food and space. Also, they are often under the attack of vora­cious predators such as bacteriophages and protists, which they fight using all kinds of weapons. Bacteria have developed an astonishing set of mechanisms to deal with protozoan predation that would surprise you! These involve simple yet effective methods such as morphological plasticity (that is, growing bigger, making filaments) or increased motility; or more sophisticated ones such as the secretion of exopolymers that allow biofilm formation; injection and release of toxins, etc. If you are curious, you can check these strategies in more detail in this publication. Importantly, pa­thogenic lines might emerge when environmental bacteria co-opt strategies initially developed to deal with environmental selective pressures in a disease context, for instance when infecting mam­mals. 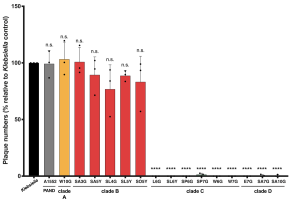 Figure 1. Survival (here represented as % of pla­que numbers compared to the pos­itive con­­trol, Klebsiella) of amoe­bae after mix­ing with dif­fer­ent V. cholerae strains. While the pan­demic re­presen­tative and strains from clades A and B are not toxic against D. discoideum, strains from clades C and D com­pletely wipe out the amoe­bae. Source. Frontis­piece: V. cholerae re­­siding in the A. castellanii vac­uole. Source

One particularly appropriate bacterium to study the life­style shift from environmental to pathogenic is Vibrio cholerae. This bacterium is well known as the causative agent of the deadly diarrheal disease cholera. Even though cholera is sometimes considered a disease for the history books, it still infects up to 4 million people every year. The world has experienced seven cholera pandemics since 1817, and many small outbreaks can also occur after natural disasters. Not widely known is that only a small proportion of V. cholerae strains can actually cause cholera. Out of the 200 different sero­groups known for this bacterium, only 2 (O1 and O139) are known to have caused cholera pandemics. These so called "pandemic strains" are highly clonal. On the other hand, the vast majority of V. cholerae strains live in ri­vers, coastal waters and estuaries associated to zoo­plank­ton and shellfish. These so called "environmental isolates" present a high genomic variability and do not cause cholera if ingested by humans.

The reasons for the emergence of these dangerous pandemic V. cholerae strains are not fully un­derstood. The main cholera virulence factors are encoded in two genomic islands: (i) cholera toxin in the CTXΦ prophage and (ii) toxin-coregulated pilus (TCP) in the Vibrio pathogenicity island 1 (VPI-1). However, there are some reports of environmental isolates harboring these islands. On the other hand, some of the strains that harbor these islands and are able to provoke cholera somehow only cause small and localized outbreaks of the disease, never reaching pandemic le­vels. Therefore, the evolutionary rise of V. cholerae pandemic strains is quite complex and multi­factorial.

Figure 2. A Representative strains from each clade and their respec­tive hlyA minus ver­sions were spot­ted onto blood agar plates to check for hemo­lytic activ­ity (sta­tus scored as pos­itive or neg­ative under each spot). B Strains from clades C and D are still toxic ag­ainst amoe­bae even if they are no longer hemo­lytic­ally ac­tive. Source

In order to better understand how pandemic cholera emerges, it is crucial that we appreciate what makes the pandemic strains different from their environmental counterparts. This is a matter of greatest interest in our laboratory. We have recently published a study where we compared the interbacterial and anti-predatory behavior of 15 environmental V. cholerae isolates collected in coastal California, against a representative pandemic strain. We focused our research on two molecular wea­pons that are differentially regulated in pandemic and environmental strains and that could be relevant either in a disease context or in the aquatic environment: he­molysin and the type VI secretion system (T6SS).

I will focus here on the anti-grazing contribution of these two mechanisms. For that, we used the amoeba Dictyostelium discoideum (Dicty for short) as a model protist predator. We used a plaque assay to evaluate how well a bacterial strain could defend itself against Dicty's predation. We mix bacteria with an approximate known number of amoebal cells and spread them on a plate. After 3 to 5 days we count the number of plaques formed, which represent how many amoebae survived after being mixed with the bacterial culture. If the bacteria are extremely toxic against the amoe­bae, none or very few plaques will be formed on the bacterial lawn. As positive control for plaque formation, we included plates in which Dictys were mixed with a non-encapsulated strain of Kleb­siella pneumoniae, which is known to be a good food source for Dictys. When we tested all 15 en­vironmental strains (which were classified in 4 different clades when they were isolated) compared to the pandemic representative against Dicty, we found that (i) pandemic V. cholerae was not toxic against amoebae under these conditions; (ii) strains from clades A and B were successfully grazed on by Dicty, while strains from clades C and D were extremely toxic to these amoebae (Figure 1). 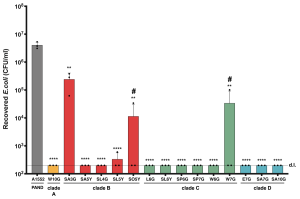 Figure 3. All 15 environmental strains tested can kill E. coli prey con­stitu­tively (con­firm­ing what was ob­served in prev­ious studies, see this and this). This kill­ing pheno­type is T6SS-depen­dent (check our publication for de­tails). In con­trast, pan­demic V. cholerae strains keep a tight reg­ulation of their T6SS and only activ­ate it under specific con­ditions (please check this and this pub­lica­tions from our group). Strains mark­ed with a "#": kill­ing was less effec­tive in only one out of three rep­licates.

We investigated the role of two molecular weapons in this scenario, hemolysin and T6SS. Previous work from our group showed that proper timing of the pore-form­ing toxin hemolysin is crucial in the establishment of a replication niche inside the contractile vacuole of the aquatic amoeba Acanthamoeba castellanii. While pande­mic strains keep a tight regulation of the expression of this toxin and could therefore successfully live in the contractile vacuole, constitutive/enhanced hemolysin production leads to premature host killing. So, could environmental strains of V. cholerae use hemolysin as a defence mechanism against Dicty predation? First, we checked the hemolysis activity status of these strains on blood agar plates and found that all these strains lysed blood cells (meaning that they keep the toxin constitu­tively active). Disruption of the hemolysin gene hlyA in a representative strain of each clade (as not all of these strains are very fond of transforming DNA) led to the abolition of hemolytic activity (Figure 2A). Surprisingly to us, however, strains from clades C and D continued to be toxic against Dicty even when their hlyA gene was inactive (Figure 2B). Therefore, hemolysin did not play a role as a defense strategy against amoebae under these conditions. 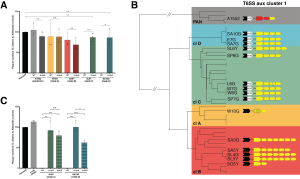 Figure 4. A Survival of amoebae after mixing with T6SS minus (ΔvipA) var­iants of rep­resen­tative strains from each clade. Strains from clades C and D with­out an active T6SS can no longer kill amoe­bae. B T6SS effect­ors car­ried by en­viron­mental strains in the aux­iliary clus­ter 1. Ob­serve that only strains from clades C and D (and the pan­demic strain) carry an actin-cross­linking domain (ACD) effector, which is active against eu­karyotes. C Del­etion of only the ACD is enough (or al­most) to allow amoe­bal sur­vival, show­ing that this effec­tor is par­ticularly im­portant to in­toxicate the amoe­bae. In our publication you can check all the other effec­tors car­ried by these strains.

Next, we wanted to check the relevance of the T6SS as a defense strategy against predation. The T6SS is a mole­cular killing device that resembles an inverted bacterio­phage tail and can shoot toxic molecules (effectors) into target cells. T6SS effectors are usually active against con­served cellular components such as mem­branes, pepti­do­glycan, nucleic acids or the eukaryotic cytoskele­ton. As the T6SS is most commonly used in bacterial warfare rather than against eukaryotes, we first tested and con­firmed that all 15 strains could kill E. coli prey bacteria and therefore have a constitutively active T6SS (Figure 3). This is in sharp contrast to pandemic strains, which keep their T6SS tightly regulated. We then tested a genetically engineered T6SS silent variant from a representative strain from each clade against the amoebae and com­pared to the wild-type strains. In contrast to what we observed with the hemolysin mutants, the T6SS silent strains from clades C and D were no longer toxic against the amoebae (Figure 4A).

However, if all environmental strains have an active T6SS (Figure 3), how come only strains from clades C and D could use the machinery against amoebae? The answer came from the careful characterization that we did of all the effectors carried in the T6SS clusters of these strains. We observed that only strains from clades C and D had the anti-eu­karyote actin-crosslinking domain (ACD) effector as part of one of the T6SS tip proteins (VgrG) in the T6SS auxiliary cluster 1 (Figure 4B). To pinpoint if the ACD was the responsible for the amoe­bae killing phenotype we observed, we removed only the ACD from the vgrG1 gene of clades C and D strains. When testing these strains against amoebae, we observed that they were no longer toxic against amoebae, much like the T6SS minus strains altogether (Figure 4C).

It's important to note that pandemic V. cholerae strains also carry an ACD effector (Figure 4B) but, as they keep their T6SS inactive in the tested conditions, the strain is not toxic against amoebae. In fact, the ACD of toxigenic strains is an important asset in a disease context. For instance, the ACD from a T6SS active toxigenic (non-pandemic) strain was involved in toxicity against macrophages and amoebae and in causing intestinal inflammation in mice. The ACD was also shown to be im­portant in the expulsion of preinoculated commensal bacteria by alternating intestinal peristalsis of zebrafish larvae. This latter example was shown with a pandemic V. cholerae strain in which the T6SS was kept artificially active by induction of a transcription factor involved in T6SS activation.

Our results show that just having a wonderful weapon as the T6SS is not always enough to fight all challenges of life in the microscopic world. It is necessary to carry and load the correct poison to kill certain enemies! Our results also point out that the ACD effector, which is relevant for disease, most likely has an environmental origin and was initially used as a defense against eukaryotic grazers. 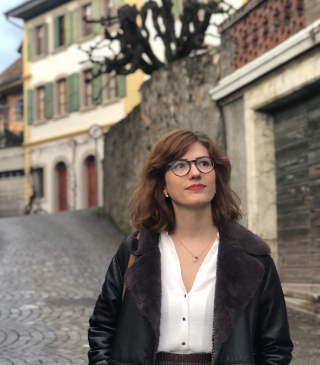 Natália Drebes Dörr is a graduate student in the lab of Prof. Me­lanie Blokesch at the Swiss Federal Institute of Technology in Lausanne. Her PhD projects combine many aspects of  Vibrio cholerae pathoecology. Before that, she completed her bache­lor and master studies in Brazil, working with symbiosis evolu­tion.