by John McCutcheon, Janie and Christoph

This could become a very short explainer of the term "trans-translation", as given by Vioque and de la Cruz in their minireview:"Trans-translation is a process found in all bacteria, which contri­butes to the release of ribosomes that are stalled through a variety of causes, for example when the 3' end of a truncated mRNA lacking a stop codon is reached or at internal clusters of rare co­dons. Trans-translation requires tmRNA. Trans-translation is not essential for cell viability under laboratory conditions, but recently it has been shown that it can contribute to cell viability in the presence of protein synthesis inhibitors." Case solved, book closed.

There's life in the old dog yet, as the saying goes. John McCutcheon (@mcsymbiont), professor at Arizona State University, has "lent" us his latest Twitter thread in which he unravels the his­tory of tmRNA starting way back in the late 1970s. And above all he points out the latest pirouette in this twisted story. Here, Christoph will add some comments to John's tweets, while Janie will join in the 'latest pirouette' in a future post. 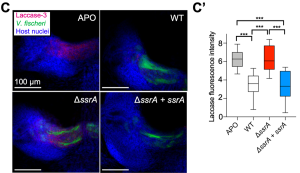 Legend to Fig. 1. Host (Euprymna scolopes) responses to colo­nization by WT or ΔssrA (Vibrio fischeri) differ. C Localization of the laccase-3 transcript (magenta) on one side of the light organ using hybridization chain-reaction fluorescence in situ hybridization (HCR-FISH) labeling. Light organs were colonized by the indicated strain of GFP-labeled symbionts (green). C' Quantification of laccase-3 signal using relative fluorescence intensity of a Z-series image of the light organ (n = 9). P values were calculated using a 1‑way ANOVA with TMC. 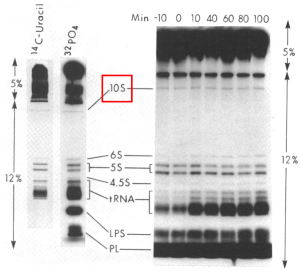 John, 2/12
This small RNA (called 10Sa or SsrA or tmRNA) has a neat history. It was first discovered as a small stable RNA in E. coli in 1978: Small stable RNAs from Escherichia coli : evi­dence for the existence of new molecules and for a new ribonucleoprotein particle containing 6S RNA by Lee et al. (1978)

Christoph adds
The gel shown in Figure 2 has marks for E. coli 10S RNA and, in addition, for 4.5S, 5S, and 6S RNA. 5S RNA is part of the 30S small ribosomal subunit together with 16S RNA and 22 ribosomal proteins. 4.5S RNA (ffs gene) is, together with p48 protein (ffh gene), part of the signal recognition particle (SRP), which has an essential role in protein secretion and a not-so-clear role in translation. A role for 6S RNA is not yet known.

Legend to Fig. 2. Stable RNA species of E. coli. The two left lanes show [14C]uracil and long-term (7 h) 32P‑la­bel­ed cell lysates separated on a tandem 5%/12%o gel. 10S, 6S, 5S, 4.5S, and tRNA bands appear in both la­nes. Lipopolysaccharides (LPS) and phospholipids (PL) are labeled with 32P only. Seven right lanes represent samples collected during phosphate starvation in a TM medium containing peptone separated in a 5%/12% gel. Cells were labeled with 32Pi for 2 h prior to starvation. Time 0 indicates the beginning of starvation. The 6S band became darker as cells were starved for phosphate due to the relative stability of 6S compared with rRNA.

John, 3/12
It was called "10S" because of its sedimentation through a sucrose gradient (the same way that bacterial ribosomes are called 70S). It's function was unknown.

Christoph adds
"S" stands for Svedberg, the unit traditionally used to express the sedimentation coefficient, a non­linear function of a particle's mass, density, and shape that depends on the frictional forces retarding its movement, which, in turn, is related to the average cross-sectional area of the par­ticle (correct but pure scientese.)

Christoph adds
It turned out that the "10S" fraction of sucrose gradients (and in the gels as in Fig. 2) actually con­tained two RNA molecules of almost identical size: the 363 nt long 10Sa RNA (product of the ssrA gene), and the 377 nt long 10Sb RNA (product of the rnpB gene). Thus the confusingly similar names of these small stable RNAs. The es­sential 10Sb RNA binds to C5 protein (RnpA, rnpA gene), and their complex is usu­al­ly called RNase P. 10Sb RNA alone can catalyze appropriate processing of pre-tRNAs in vitro, indi­cat­ing it is sufficient for sub­strate recognition and cleavage activity (sub­strate recognition is via structural features and not by base pairing interactions.) The RNase P pro­tein moiety RnpA is re­quired for activity in vivo and increases the efficiency of processing in vitro (reviewed by Wassar­man et al. (1999)).

A brief detour. These so-called ribonucleoproteins like SRP and RNase P – but also the eukaryotic spliceosome – in which the RNA moiety does not only have a structural "corset" function but ac­tually performs the primary function, finally put the ribosomologists on the right track. People were so fixed on the idea that only proteins have enzymatic activity that they simply couldn't ima­gine that RNA would be capable of this feat too! Well into the 90s, it was commonly believed that the primary enzymatic reaction of the ribosomes, the long-sought yet elusive peptidyltransferase, was performed by one or more of the large-subunit ribosomal proteins and the 23S rRNA had only a structural role, that is, to keep the proteins in the correct spatial arrangement. As we now know, the peptidyltransferase is in the 23S rRNA (residues A2451 and G2447 of the E. coli 23S rRNA). 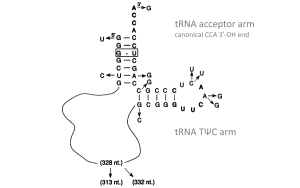 John, 5/12
The first hint of a function came in 1994, when it was re­ported that part of the 10Sa/SsrA RNA folded into a tRNA-like structure and could be charged with alanine in vitro (!): A tRNA-like structure is present in 10Sa RNA, a small stable RNA from Escherichia coli by Komine et al. (1994)

Christophs adds
Komine et al. got valuable hints for a tRNA-like structure of 10Sa RNA from the observation that RNase P clips-off the first 7 nucleotides from the 5'‑end of the primary ssrA transcript, pre-S10a RNA. RNase P is known to process tRNAs from larger transcripts and there­fore apparently detects a similar structure in pre-10Sa RNA. No processing of the 3'‑end of pre-S10a RNA with the canonical 'CCA tail' of tRNAs was nececessary to obtain in vitro charging of 10Sa RNA with alanine by partially purified alanyl-tRNA synthetase.

Legend to Fig. 3. The tRNA-like structure of 10Sa RNA. Seven nucleotides from the 5'-end and 28 nucleotides from the 3'-end of 10Sa RNA can be arranged in a structure equivalent to a half-molecule of tRNA. This struc­ture consists of an acceptor stem and a TΨC stem-loop. The conserved bases found in these domains of nor­mal tRNAs are indicated in boldfaced letters. The nucleotide substitutions found in 10Sa RNA from Alcali­gen­es eutrophus and M. tuberculosis are indicated with solid arrows and broken arrows, respectively.

John, 6/12
Another clue to function came the next year, in 1995, when a group trying to make recombinant mouse interleukin-6 (IL-6) in E. coli noticed that a significant fraction of the proteins produced in the cell had an 11 amino acid extension at the C-terminus.

John, 7/12
This 11 amino acid extension, it turns out, corresponded *exactly* to a segment of the ssrA gene: C‑terminal extension of truncated recombinant proteins in Escherichia coli with a 10Sa RNA deca­peptide by Tu et al. (1995) 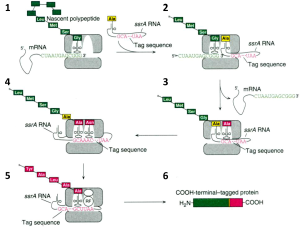 John, 8/12
Finally, in 1996, Bob Sauer and colleagues put it all to­geth­er and showed that what 10Sa RNA was doing was rescuing stalled ribosomes. For example, if an mRNA is broken and loses its stop codon, the ribosome will stall at the end of the message: Role of a peptide tagging system in degradation of proteins synthesized from damaged messenger RNA by Keiler et al. (1996)

John, 9/12
If 10Sa RNA is around, the stalled ribosome will SWITCH TO A NEW RNA MOLECULE (the 10Sa) by recognizing the tRNA-shaped part of 10Sa, then treat the rest of 10Sa RNA as an mRNA, add the 11 amino acid signal, and then terminate normally to translate again.

Legend to Fig. 4. Model for ssrA RNA-mediated peptide tagging of proteins synthesized from mRNAs without termination codons. 1 The ribosome reaches the 3' end of the mRNA, leaving the nascent polypeptide esteri­fied to the tRNA in the A site. 2 The stalled complex is recognized by alanine-charged ssrA RNA, which binds in the P site. 3 Alanine from the ssrA RNA is added to the nascent polypeptide chain, and the ribosome swit­ches translation to the region of ssrA RNA that encodes the peptide tag. 4 The ssrA peptide tag is added co­translationally to the growing nascent chain. 5 The ssrA peptide-tagged protein is released from the ribosome when the ochre (UGA) termination codon of ssrA RNA is reached. 6 The ssrA peptide-tagged protein can be recognized and degraded by specialized COOH-terminal-specific intracellular proteases.

Christoph adds
To round off the story at this point, we now know that 10Sa RNA binds stoichiometrically, that is, in a 1:1 ratio, to the SmpB protein with its tRNA-shaped domain (the smpB gene lies directly up­stream of the ssrA gene in the E. coli genome). This tmRNA-SmpB nucleoprotein complex is re­quired to carry out the trans‑translation reaction because neither molecule interacts with the ri­bosome on its own in vivo, and it enters the ribosome as ternary complex with Ef-Tu. Within the ribosome, SmpB provides contacts in place of the tRNA anticodon stem, interacting with the ri­bo­some near the decoding center.

John, 10/12
That 11-amino acid signal targets the protein for degradation. THIS IS BANANAS!

Christoph adds
A whole basket of exotic fruits also came to my mind when I first heard about this! But then, what could be more energy‑efficient than detaching a stalled ribosome from a defective mRNA and si­multaneously 'tagging' the incomplete and functionally worthless polypeptide for degradation much like eukaryotes − and a fair number of prokaryotes − do with ubiquitinylation? 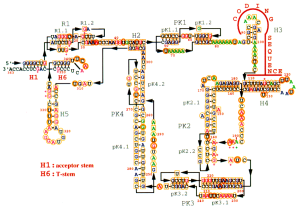 John, 11/12
Why do I care so much about this little RNA? Because Sauer's paper was published about the time I was trying to figure out what to work in grad school, and I loved it. (It also so happens that my very first paper was on the structure of 10Sa RNA: Probing the structure of the Esche­richia coli 10Sa RNA (tmRNA) by Felden et al. (1997))

Legend to Fig. 5. Secondary structure model for E. coli tmRNA showing the probing results with DMS, CMCT, and DEPC under native or semi-denaturing conditions. Color code and symbols used are similar to that of Figure 4B. Bases where no or only partial information is provided were not, or were only partially, determinable. Other indications provided are identical to Figure 8.

Christoph adds
Yes, in this paper from Raymond Gesteland's lab the (almost) complete secondary structure of 10Sa RNA is described (see Figure 5). Note that all these various stems, stemloops, and pseudo­knots in the complex stucture cannot be deduced by simple sequencing (this structure together with the cryo-EM structure served as template for David Godsell's 3D model you've seen on STC's frontpage.)

John, 12/12
So seeing this little RNA now being involved in the squid-Vibrio symbiosis makes me very very happy. Thanks for reading, RNA nerds!

Janie adds
I will take over from here. So, stay tuned for the role of SsrA in the squid-Vibrio symbiosis, on a future post.