Putting Life on Earth in Perspective

Last week I was very fortunate. I had the opportunity to focus my atten­tion on putting life on Earth in perspec­tive. It was a welcome respite consid­ering these trying times. Almost one year ago, thanks to Nassos Typas, I received an invit­ation to speak on micro­bial diversity at the European Molecular Biology Lab­oratory (EMBL) in Heidel­berg. The occasion was to be their 21st Science and Society Conference entitled "Our house is burning: scientific and societal responses to mass extinction." The con­ference should have been last week but, of course, there was no trip to Heidel­berg. Instead, it went virtual. But it still provided me with a wonder­ful oppor­tunity for thinking. Let me share some of those thoughts with you.

By using the phrase "our house is burning" the organizers managed to convey the sense of horror of watching our property destroyed by fire. It is im­possible to not be shaken by that mental image. Since the house being referred to is planet Earth, the feelings that emerge become ever more shocking. To alleviate this shock, I found it extremely useful to put diff­erent life forms in perspective in terms of their relative sizes, num­bers and their time of residence on the planet. 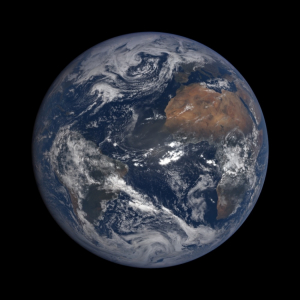 This is an image of our house, mag­nificent planet Earth, in what I consider one of its most stunning perspec­tives, a portrait from space. The very fact that such images can be captured speaks volumes as to what humans can accom­plish. And human­ity's never-ending search for meaning is epitomized by our desire to explore, even sending crafts out to space, leaving Earth far behind, a "mote of dust suspended in a sun­beam," Carl Sagan's Pale Blue Dot. But humans also caused many of the problems that the planet now faces, global warming and massive loss of bio­diversity prime among them. How does an organism, whose dimension is about one meter, have such devastat­ing effects on a planet whose dia­meter is 107 times larger? These days that's not too hard to imagine, we are all aware that an entity 10-7 the size of a human easily wreaks havoc on its host. Wel­come to the Anthropo­cene, the epoch in the natural history of Earth charac­terized by noticeable human impact on eco­systems and geology. Lest you think – as some proponents do – that the Anthropo­cene started with the Trinity test, I remind you that the extinction of South American mega­fauna some 12,000 years ago coincided with the arrival of Homo sapiens.

The conference overview statement started by putting the current loss of bio­diversity in the context of Earth's history: "There have been five mass extinc­tions in Earth's history, but are we already in the midst of a sixth? At least one million animal and plant species are currently threat­ened with extinction, many within decades – a rate unprece­dented in human history." But what about the microbes? Did they suffer great declines in the prior five mass extinc­tions? Are microbes declining in the midst of a sixth? (Do these sound like Talmudic Questions?)

To me the microbes are the most foundational of all life forms. Though largely in­visible as in­dividuals, they play and have always played key roles in the function­ing of all eco­systems. So much so, that I do not think of this planet as 'our' house, rather it is the microbes' house. Homo sapiens only recently step­ped in as a guest and, mind you, thus far we have been far from an ideal guest. We can only hope that this improves in the near future.

What have been the dynamics of microbial populations along Earth's history? Answer­ing this question is not an easy task. Over the long run, the microbial fossil record is poor compared to that of plants and animals. Plus, assess­ment of current overall changes is made difficult due to the gargan­tuan micro­bial cell population and diver­sity. There are some 1030 cells and upwards of 1012 species (though the very concept of species is debatable, as we discussed here before).

Let's first have a look at the so-called "Big Five" mass extinc­tion events. The first hap­pened 440 million years ago, the fifth, 65 million years ago. From the fossil record, the percent of species lost range from 75−95%. The causes were usually planet­ary cooling and volcan­ism. The fifth one also involved the Deccan Traps and the now famous asteroid collision that created the Chicxulub crater, and famously led to the demise of the dino­saurs, among others. When it comes to microbes, there's no direct evidence for their demise during these five periods. However, through indirect approaches, inves­tigators have spec­ulated both ways. In 1998 Dykhuizen argued that bacteria intrinsic­ally have very low extinc­tion rates and very high speciation rates. These attributes would render them resis­tant to mass extinc­tion. In con­trast, in 2007 Weinbauer and Rassoulzadegan spec­ulated that whenever an animal or plant species becomes extinct, many of the host-associated microbial species follow along. But would this have led to mass extinc­tions? A more recent (2018) paper by Louca et al. attempts to answer that question. The authors dev­eloped methods to analyze the phylo­genies of nearly half-million bacterial lin­eages and deter­mined the fraction of extant bacterial diver­sity missing from the phylo­genies. From their results they con­clude: "Most bacterial lineages ever to have inhab­ited this planet are esti­mated to be extinct. Our findings disprove the notion that bacteria are unlikely to go extinct, and provide a valuable pers­pective on the evolu­tionary history of a domain of life with a sparse and cryptic fossil record." Impor­tantly, while they argue for bacterial extinc­tions, they conclude that their "findings suggest that, during the past billion years, global bac­terial speciation and extinction rates were not sub­stantially affected during the mass extinc­tion events seen in eukaryotic fossil records."

Let's now put those mass extinc­tions of plants and ani­mals in the pers­pective of the entire natural history of the planet. Looking at my rough timeline several features stand out. First, Homo sapiens just recently entered the scene. Second, the five mass extinc­tion events I've dis­cussed are rel­atively recent because, after all, plants and animals were not around for the vast majority of Earth's history. Third, there were only microbes for the first three billion years of evol­ution.

By the time plants and animals first evolved, the pla­net was replete with microbes. And they had been respon­sible for one of the most remark­able changes in the planet's history: The Great Oxygen­ation Event (GOE). Not long after the first microbes appeared, some evolved photo­synthesis, the cap­acity to harness the energy from light to convert CO2 into sugars. A by-product of the reaction was the prod­uction of highly reac­tive oxygen gas. Initially, most of the oxygen reacted with iron in sea­water to form iron oxides on the ocean bottom, giving rise to what we now know as "banded iron form­ations." But even­tually oxygen began to ac­cumulate. This poisoning of the atmo­sphere with such a reactive molecule must have led to the greatest mass extinc­tion of all time, but it took several hundred million years to unfold. That gave time for life on the planet to adapt. Two key evol­utionary steps related to the presence of oxygen occur­red as a conse­quence of the GOE that changed our planet for­ever. First, bac­teria evolved the capa­city to dump electrons onto oxygen and thus generate energy much efficiently. For the first time there were aerobic respirers. Subseq­uently, an archaeon some­where became en­tangled and even­tually fused with one of these aerobes and gave rise to LECA, the last eu­karyote com­mon ancestor. The rest is… well, natural history.

To end, let's fast forward to the present, to the midst of the "sixth extinc­tion" and inquire whether microbes are suf­fering the same fate as so many of the plants and animals. To address this, I will side­step the issue of extinc­tion. This I do for two reasons. The im­mensity of micro­bial bio­diversity and the dif­ficulty in defin­ing a species makes it almost futile to deter­mine if specific lin­eages have become extinct "forever." More impor­tantly, as Ceballos et al. have argued, focusing on species extinc­tions "leads to a common mis­impression that Earth’s biota is not im­me­diately threat­ened, just slowly enter­ing an epi­sode of major bio­diversity loss." It is far better to deter­mine if pop­ulation sizes and ranges are affected. For plants and animals, the evidence is stun­ning. In their words: "Dwindling pop­ulation sizes and range shrinkages amount to a massive anthropo­­genic erosion of bio­diversity and of the eco­system services essential to civil­ization. This 'bio­logical annihil­ation' under­lines the serious­ness for human­ity of Earth's on­going sixth mass extinc­tion event. Sadly, similar bio­logical annihil­ation is observed among microbes. Here are just a couple of examples: Global phyto­plankton has declined dramat­ically over the past century and the divers­ity of the intestinal micro­biota of "western­­ized" humans is about half that found in prev­iously un­contacted Amerindians. Is the situation bleak beyond repair? I don't think so, but then I consider myself an optimist. I believe if micro­bial eco­systems are allowed to recover, they will. It's just that humans need to take dramatic actions. We need to continue to pursue ag­gressive actions as com­munities, as coun­tries, as a world, even when some leaders insist on turning a blind eye to the cata­strophe. And as an individual I'll continue with lessons that have been ham­mered home by the pan­demic: drive less, fly less and eat less meat.