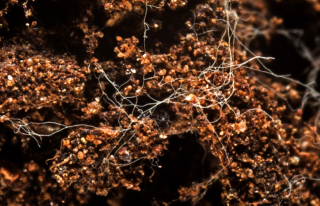 This photograph, taken from our book Life at the Edge of Sight, shows a network of almost invisible fungal filaments which, like miniature highways, wind their way around peaks and form bridges over valleys all within a minute amount of soil. The individual filaments are fungal hyphae (and in their aggregate they are the mycelium). In the text of our book, Scott Chimileski and I describe how hyphae serve to connect virtually everything to everything else in soil ecosystems: "These networks are so large and connect so many different categories of life that it is difficult to tease apart where one organism ends and another begins." Yes, mycelia can be quite large! Elio described what might be the largest mycelium known. Spanning three square miles, Armilaria ostoyae is a single organism often referred to as Oregon's "Humongous Fungus." The sprawling hyphae function as microbial plumbing systems, they transport nutrients and chemical signals through their cytoplasm along great distances and deliver them to numerous species of organisms that benefit greatly from this service. This is the case for the filaments that associate with the roots of many plants, the mycorrhizae, wonderfully described in another post by Elio. But also, there is mounting evidence that hyphae serve as the highways I describe above. Hyphae indeed allow motile bacteria to move along their surface to reach far away destinations. 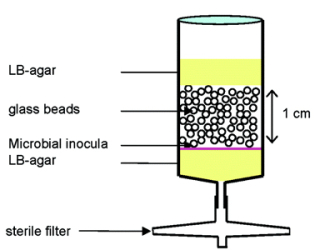 The idea that fungal hyphae can serve to transport bacteria has been around for at least fifty years. Pause to think about it for a moment. You'll likely agree that this dynamic fungal-bacterial interaction makes sense in complex soil environments. There are so many motile bacteria in soil and yet, for most of the time, so little water. Dry or barely wet soil is not the type of place where you imagine bacteria swimming around. But, even in rather dry soil, hyphal surfaces can be surrounded by a thin film of water and there's plenty of hyphae in soil, perhaps as many as 100 meters per gram! Plenty of wet hyphal surfaces for bacteria to swim in and explore vast distances. While some papers dating back to the 1970s addressed the possibility of bacterial transport along hyphae, the concept of "fungal highways" first appeared in a 2005 publication by Kohlmeier et al. The authors developed a simple column of two LB agar plugs "sandwiching" dry glass beads (to mimic air-filled porous soil environments). Fungi inoculated on the bottom invariably reached the top because hyphae could traverse the air-filled spaces between the glass beads. In contrast, bacteria alone could not. When both fungi and bacteria were inoculated, bacteria did migrate to the top. Their key observation was that only motile bacterial species reached the top. The hypothesis was that the bacteria "moved by their intrinsic motility through continuous (physiological) liquid films forming around fungal hyphae." Direct proof that bacteria propel themselves along the hyphae came with the use of Pseudomonas putida and an isogenic mutant lacking flagella: no flagella, no migration. But the story does not end there. These interspecies interactions are more complex. These are not fungal "freeways." Rather, they are toll roads.

Abeysinghe et al. from the University of Tsukuba (Japan) show that bacterial travels on fungal hyphae are mutualistic interactions. Bacteria gain access to new locations through the use of the fungal highways. But, for the use of the highways the bacteria pay a toll, they supply the fungus with excess amounts thiamine which in turn promotes hyphal growth. Nice! The benefit of collecting the toll is that new roads can be built. It's a win-win situation for both fungus and bacterium. This paper is certainly eye-catching for it is replete with fun-to-watch videos, sure to delight microbiologists everywhere (yes, it is open access so enjoy it to your heart's content).

The authors used Bacillus subtilis and Aspergillus nidulans as their model system. Simple observation made it clear that individual bacteria could easily travel along the hyphae. After demonstrating that the bacterial movement required flagella, they did a transcriptomic analysis of the co-culture. Perhaps surprisingly, the expression of only very few genes of either microbe was affected. But one change was striking, the genes for thiamine biosynthesis were up regulated in the bacterium while they were down regulated in the fungus. Based on this lead, the authors investigated the effects of using thiamine auxotrophs (ΔthiA) in their model system. In their medium, A. nidulans ΔthiA grew very poorly but its growth was restored by addition of thiamine (of course) or co-cultivation with wild-type B. subtilis. But co-cultivation with B. subtilis ΔthiA did not restore growth. All of this already argued strongly that the bacterium provided thiamine to the fungus. But the authors took it more step further, they obtained direct proof of the thiamine exchange by feeding 13C-glucose to the bacterium, co-cultivating the labeled bacteria with A. nidulans, and then isolating 13C thiamine from the fungus.

Two more sets of experiments provide "icing on the cake" for this story. First, the authors show that the bacteria can also travel on the fungal hyphae across the air-filled spaces of dry soil. Second, they show that these bacteria interact in a similar way with numerous other filamentous fungi and it appears that thiamine exchange also increases the growth of these other fungi. All in all, these results provide yet another beautiful example of a microbial mutualistic symbiosis. And these fungal highways are not just found in soil. In another beautiful paper, Zhang et al. from Ben Wolfe's lab at Tufts University, showed that similar bacterial dispersal on fungal networks helps shape the complex microbial communities found on cheese rind. Something to think about next time you enjoy a portion of aged cheese!