« Meselson & Stahl, the Conversation | Main | Alcanivorax, an efficient cleaner of our oceans »

A Whiff of Taxonomy – the genus Psychrobacter 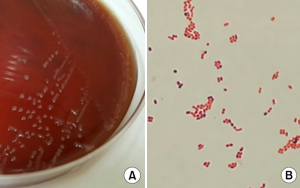 Figure 1. Colonial and microscopic morphology of Psychrobacter sanguinis. A Non-pigmented and non-hemolytic colonies with circular and smooth edges on a blood agar plate. B Gram-negative coccobacilli (Gram stain, ×1,000). Source (PDF)

What could be more chilling than to deviate for once from our motto to "...emphasize the unusual and the un­expected phenomena" and taking a look at a, well, slight­ly boring group of psychrophilic bacteria? The genus Psy­chrobacter − the prefix psychro- comes from the ancient Greek ψυχρός for cold, frozen − contains about 40 de­scribed species of Gram-negative, non-motile, osmotol­erant (salt‑tolerant), psychrophilic, aerobic coccobacilli (Figure 1). "Coccobacillus" sounds a bit silly, like unde­cided, but it describes the shape of these bacteria quite well and is an accepted term (Figure 2).

Being called psychrophilic (or, synonymous, cryophilic) sounds as if they should be somehow interesting, as if they were extremophiles that everyone finds exciting. Not so. In 1975, Richard Morita had sug­gest­ed in his review of "Psychrophilic Bacteria" to distinguish them by their minimum, optimum, and maximum growth temperatures, which are <0, <15 and <20°C, for psychrophilic and 0–5, >15, and >20°C for psychrotolerant bacteria, while mesophiles that can grow at low temperatures should be called psychrotrophs. Psychrobacter arcticus, for example, can grow at below-zero tempera­tures (Figure 3). And psychrobacters in general grow poorly or not at all at temperatures above 25°C and optimally at ~15°C. They thus fit into the "drawer" psychrophilic but some are psychroto­lerant rather (see below.) 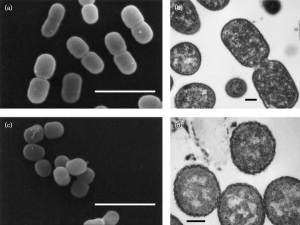 Psychrobacter sp. are Gammaproteobacteria but are not alone in this "drawer". Psychrophilic and psychrotolerant lineages have been found in several other branches of this phylum (Pseudomonads, Vibrios), in other bacterial phyla including Actinobacteria and Cyanobacteria, and also among the Archaea. Maybe it's not so surprising af­ter all that there are so many psychrophiles among bac­teria. Morita pointed out that "...most biologists tend to neglect the fact that the dominant environment of the biosphere is cold. The polar regions and the oceans are 14% and 71% of the earth's surface, respectively. More than 90% (by volume) of the oceans is 5°C or colder." Just in case you are into records: the present "champion" of psychrophily is a non-spore forming Firmicutes bacteri­um, recently isolated from the permafrost on Ellesmere Island in the Canadian high Arctic. Planococcus halocry­o­philus grows at −15°C in 18% NaCl and 7% glycerol, as measured over a period of 200 days by 14CO2 breathing. 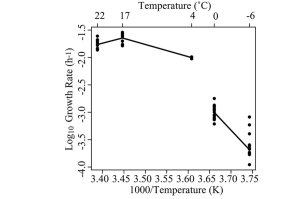 Figure 3. Log-transformed growth rates plotted versus temperature. Temperature was trans­formed according to the Arrhenius equation. Celsius temperatures are indicated at the top. P. arcticus 273-4 was grown at 22°C, 17°C, 4°C, 0°C, and −6°C. Trend lines were generated by lowess fitting to the data points over the follo­wing intervals: 22°C to 17°C, 17°C to 4°C, and 0°C to −6°C. Source

Why are Psychrobacters somewhat boring? Well, because they are virtually everywhere. Most were isolated from ant­arctic and arctic sea water, ice or permafrost soils. One, however, caused severe bacteremia in a Korean hos­pital patient (Figure 1). In fact they belong to those usual suspects that pop-up in almost all metagenomic samples worldwide, never as a dominant genus, and often together with other Pseudomonadales and Mora­xellaceae. Yet, they seem to be good "team players", which is certainly not boring as it is becoming increas­ingly clear that studying the physiology and genetics of bacteria − of microbes in general − is most revealing if not done with isolates of single species/lineages but with consortia. One Psychrobacter sp. closely related to P. glacincola (98.9% 16S rRNA identity) was isolated during a study of an arctic microbial consortium capable of de­grading crude oil.

Deppe et al. (2005) obtained this consortium by enrichment culture at 4°C for 6 weeks of mixed arctic sea ice and seawater samples collected at Svalbard, Norway. (An aside: they carefully kept their samples at <12°C all the way from the sampling site to the lab as is well known that psychro­philes easily loose viability at "higher" temperatures.) The low-carb enrichment medium was sup­plemented with 0.1% crude oil derived from offshore North Sea oil fields that contained, according to their GC-MS analysis, various linear and branched alkanes and diverse aromatic compounds (please consult the paper for the complete list of poisons.) Subsequently, they subcultured ali­quots of the bacteria in minimal enrichment medium with 0.1% crude oil as sole carbon source. They observed that during cultivation the oil droplets shrank in size, which was not observed for the control (medium without inoculum) and was therefore not caused by dispersion. The droplets were covered with a biofilm after a few days (Figure 4A). As measured by GC-MS, oil degradation was 70% complete within 4 weeks at 4°C and neutral pH (7.0). In further physiological experiments aimed to find the optimal conditions, they found that 77% of the crude oil was degraded at 20°C within 7 days at pH 8.5 by the consortium, thus faster but not significantly better than at the low temperature at the original sampling site. They wanted to know which oil components were rather co-metabolized than used as carbon and energy source. When tested as sole carbon source, the n-C24 and n-C34 alkanes, pristane, m- and p-xylene, supported growth in minimal medium at 4°C and 20°C at PH 7.0 but o-xylene and (methyl)naphtalene did not. Again, they observed biolfilm formation, here on the crystalline n-C24 and n-C34 substrates (Figure 4C). 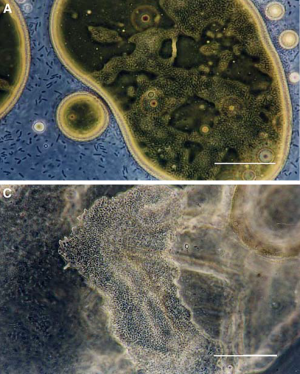 Figure 4. A Growth of the psychrotolerant con­sortium on crude oil (0.1%) at 4°C for 6 days. C Biofilm formation after cultivation of the con­sor­tium at 4°C on n-C34 crystals (1 mM) for 4 weeks. Experiments were performed in a mi­neral medium at pH 7.0, scale bar 10 µm. Source

Next to one Psychrobacter sp. (mentioned above) they could isolate from the enriched consortium four strains closely related to Pseudoalteromonas elyakovii (99.6%), Pseudomonas anguilliseptica (97.8%), Pseudomonas syn­xantha (95.3%), and Agreia bicolorata (96.6%). Phylogene­ti­cally, all belong to bacterial groups with known hydro­carbon-degrading members, the former four to the Gam­maproteobacteria while the latter, A. bicolorata, is an Ac­tinobacterium (Micrococcaceae branch.) However, none of the five isolated strains showed significant growth with any of the mentioned single substrates compared to the original consortium. Also, no mixed cultures containing 2–5 of these isolates grew with crude oil as the sole car­bon source. Only the Psychrobacter sp. isolate adhered to crude oil droplets and formed a biofilm when cultivat­ed alone with the carbon source but no significant degra­dation of the substrate was observed. Deppe et al. con­cluded "...it is obvious that the nonculturable strains are essential and play a key role in the degradation of crude oil." They could identify four other members of the con­sortium by their 16S RNA amplicons, namely strains with high similarity to Marinobacter hydrocarbonoclasticus (93.8%), Pseudoalteromonas atlantica (99.2%), Shewanel­la baltica (97.4%), and Shewanella frigidimarina (99.9%). No surprise here, as all belong to families represented by the isolated strains and one may wonder why they refused cultivation. As Deppe et al. noted, it is not possible for technical reasons to identify all, especially very rare bacteria, in a consortium with PCR-driven "16S rRNA fishing" (today one would apply metagenomic sequencing.)

My initial, somewhat lofty description of the Psychrobacters as a slightly boring genus got the final blow by a new study (still in preprint) by Daphne Welter and coworkers from Ruth Ley's lab at the MPI for Developmental Biology in Tübingen, Germany. They found that "Free-living psychrophilic bacteria of the genus Psychrobacter are descendants of pathobionts." To put this intriguing find­ing in context: it is a general notion that pathogens and pathobionts, that is, putative pathogenic commensals of warm-blooded animals, mammals and birds, evolved from mesophilic environ­men­tal bacteria (here "environmental" generously includes plant or invertebrate pathogens, and soil or marine bacteria.) Think of Mycobacterium tuberculosis, the causal agent of tuberculosis, whose closest relatives are all soil bacteria. Or take the cholera bacterium Vibrio cholerae, a ma­rine bacterium that feasts on shrimp carapaces, survives and propagates in amebas, for example in Acanthamoeba castellanii, and for which H. sapiens is more sort of "collateral host." What was not known so far is that the reverse trajectory, a re-adaptation of animal-adapted bacteria to en­vironmental conditions is possible (despite some hints in experimental evolution studies with P. aeruginosa and S. marcescens.)

A thorough genomic and physiological analysis of 80+ Psychrobacter lineages and other species from the (taxonomic) family Moraxellaceae led Welter et al. to conclude that the basal genera Aci­netobacter and Moraxella are derived from (mostly mesophilic) pathobionts, while the genus Psy­chrobacter branched-off from Moraxella later on. Fair enough, they mention that this path was paved by a recent study from Corien Bakermans from Penn State University, Altoona PA, USA. When Welter et al. projected the minimum/maximum growth temperatures of type strains onto a phylogenetic tree of these lineages they found a clear general tendency towards psychrophily in the genus Psychrobacter (Figure 5). 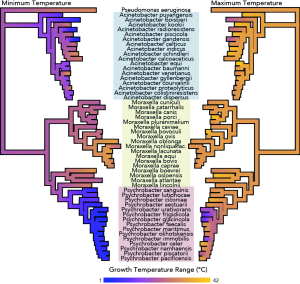 This re-adaptation to a psychrotolerant or psychrophilic lifestyle likely occurred stepwise and not in unison for the different Psychrobacter lineages. Their growth tests re­vealed two ecotypes: a "flexible ecotype" (FE) for strains that could grow at 37°C, and a "restricted ecotype" (RE) for strains that could not. FE strains are psychrotrophic, and RE strains are either psychrotrophs or true psychro­philes, that is, unable to grow at temperatures higher than 20°C. In comparison to homologs from mesophiles and thermophiles, numerous proteins of both ecotypes show a similar degree of cold-adaptation by an increased abundance of glycine, decreased abundance of proline, a decreased arginine-to-lysine ratio, increased acidity, de­creased isoelectric point, and increased hydrophobicity. However, they could not find significant differences be­tween the genomes in size and gene content that would help to explain the two ecotypes. But they found a differ­ence!

Welter et al. analyzed polar bear feces sampled in Canada's north and found, not unexpectedly, Psychrobacter spp. in 76 of the 86 samples. Both eco­types were found among the sampled lineages, for example RE strain P. immobilis in 50% of the samples (mean abundance 3%), and FE strain P. pulmonis in 8% (mean abundance 0.5%). When they then studied four RE and four FE strains for their capacity to colonize the gastroin­testi­nal tract of gnotobiotic (germ-free) mice, they recovered after 3 weeks three FE strains but no RE strains. They say on their webpage: "Growth at 37 is required but not sufficient to colonize the germfree mouse. Growth at 37 is lost in the more derived members of the genus. But they still like meat: they grow best on amino acids, and they are known to spoil frozen food. So it looks like Psychrobacter rode warm bodied hosts back into the sea, and is in the process of adapting to the habitat of its erstwhile hosts."