« A Whiff of Taxonomy – the genus Psychrobacter | Main | Retrospective, June to December 2020 »

Alcanivorax, an efficient cleaner of our oceans

Cleaners of the ocean 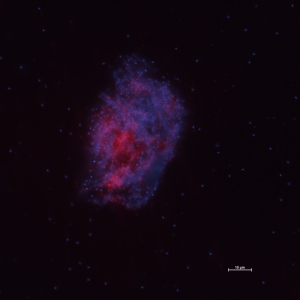 The first image that comes to our mind when we think of the oceans is immense bodies of clear waters or – in the more 'romantic' minds – beautiful turquoise waters that caress tropical beaches. Such clear waters come as a con­sequence of the extreme lack of nutrients in these eco­sys­tems. Nevertheless, the elevated primary productivity measured in seawater, which produces half of the oxy­gen we breathe, highlights the efficient use and rapid turnover of nutrients in these systems. Nothing goes to waste… until our waste gets in the way. How do such op­ti­mised microbiomes deal with anthropogenic pollutants?

These pollutants are often aliphatic hydrocarbons, the ma­jor components of plastics and large portions of crude oil, for example alkanes. Fortunately, marine ecosystems contain expert microbial degraders for such compounds. This 'brigade of microbial cleaners' is composed of obli­gate hydrocarbonoclastic bacteria (OHCB). Of the handful of microbial genera included in this group, Alcanivorax is by far the most studied and well known. While normally present at very low abundance under pristine conditions, these specialised biode­graders flourish when exposed to such pollutants (others like the Psychrobacters were just re­cently featured in STC.)

But how does Alcanivorax persist under pristine conditions? Initial thoughts were that they re­mained dormant awaiting for a polluting event in order to bloom. Now we know that marine cya­nobacteria – numerically the most abundant phototrophs on Earth – produce alkanes that can keep the small populations of OHCB alive and active around the globe.

Biodegradation of oil… and plastics!? 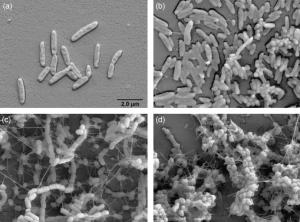 Figure 2. TEM ob­servations of Alcanivorax bor­kumensis SK2 cells, their adhesion, and biofilm formation on abiotic surfaces. The cells were grown on either pyruvate (a, b) or hexadecane (c, d) on Permanox slides in ONR7a medium. The biofilms were monitored after 4 days (a, c) and 10 days (b, d) of growth. Source

Alcanivorax and other OHCBs degrade alkanes using dif­ferent kinds of monooxygenases: AlkB, cytochrome P450 and the flavin-containing monooxygenase AlmA, able to degrade long-chain alkanes (>C20; Figure 1). These mono­oxygenases oxidize the alkanes that are then funnelled into the fatty acid β-oxidation pathway. Crude oil mainly contains medium- and long-sized alkanes (C5–C35), but some synthetic polyolefin polymers such as polyethylene are thousands of carbon atoms long, being 'just' incredib­ly-long alkanes. Polyethylene is no joke, it represents 30% of global plastic production and, being less dense than water, it is also the most abundant plastic found floating in the oceans. Due to the chemical similarity between al­kanes and polyethylene, it is not surprising that research­ers have speculated that OHCBs might degrade this and other polyolefin plastics. In fact, the recurrent identifica­tion of such bacteria on biofilms growing on marine plas­tic debris – the Plastisphere – is an indicator of potential plastic biodegradation. Nevertheless, the mechanistic understanding of such a process and robust proof of plastic biodegradation by OHCBs is still underway.

Figure 3. Agar plate containing polycaprolacto­ne where no bacteria (media control, left) and Alcanivorax sp. 24 (right) were added to two wells dug in the agar. The clear halo produced by Alcanivorax comes as a consequence of the hydrolytic activity of a secreted esterase that solubilises the polymer. Courtesy by the au­thors

We found that, in addition to degrading alkanes, many strains of Alcanivorax can also efficiently degrade natural and synthetic aliphatic polyesters. For this, these bacteria produce and secrete large amounts of a broad-range es­terase that cuts these polymeric chains, making the hy­dro­lysed subunits available for consumption. Natural po­lyesters, for example polyhydroxyalkanoates, are com­mon carbon storage polymers that many microbes accu­mulate when nutrients, such as phosphorus, are scarce. Hence, this natural polymer – that may be released du­ring phage attack, inefficient grazing or cell death – is an additional source of carbon and energy that may keep Alcanivorax active in pristine seawater. But the esterase secreted by Alcanivorax can also break down synthetic aliphatic polyesters, that is. polybutylene succinate, polyethylene succinate and polycaprolactone (Figure 3). These aliphatic polyesters are considered biodegradable alternatives to recalcitrant plastics and, with Alcanivorax populating marine environments, we now know the potential for biodegrading these more eco-friendly materials already exists in oceanic ecosystems.

Hence, in addition to oil spill bioremediation, we may also need to thank the genus Alcanivorax and other OHCBs for marine plastic pollution clean-up. Nevertheless, while the involvement of this incredibly specialised hydrocarbon biodegrader has been proven for aliphatic polyesters, its in­volvement in traditional plastic degradation remains elusive. The full picture of the contribution of Alcanivorax as a versatile degrader of marine pollution is certainly a matter of further research! 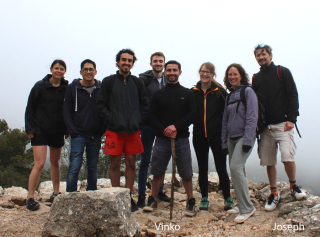