We are not short of evidence that microbes can survive in space for extensive times. A favored way to find out is to carry out often multinational studies by placing sample organisms on the surface of the International Space Station. Such experiments have suggested that small rock ejecta just a few centimeters in diameter could protect radiation-resistant bacteria or bacterial spores against the intense radiation in space. Porous rocks may provide nooks and crannies for microbes to hide and be shielded from the vicissitudes of space travel. However, micron-sized grains may not afford sufficient protection. Figure 1. a. Top-down image of one Experimental Container (EC) containing one EU (Experimental Unit) showing both culture chambers inflated with medium. b. Sideways cross section through culture chamber showing location of basalt slide at the back of the chamber and principle of medium injection and inversion of membrane (shown here in yellow; left side closed, right side inflated with medium). c. Image of basalt slide in a Petri dish submerged in 50% R2A in a ground experiment. d. European Space Agency (ESA) astronaut Luca Parmitano inserts an EC into a KUBIK incubator on board the International Space Station (image credit to ESA) Source. Frontispiece. The bacterial exposure experiment took place from 2015 to 2018 using the Exposed Facility located on the exterior of Kibo, the Japanese Experimental Module of the International Space Station. Credit: JAXA/NASA. Source

In later experiments, cells of the radiation tolerant bacterium, Deinococcus geothermalis survived for about two years outside the station, both as dried planktonic cells and, even better, as biofilms. They lost viability but retained such key properties as membrane integrity, ATP content, and esterase activity. Another set of experiments, using a different Deinococcus species, D. radiodurans also placed outside the International Space Station, revealed that cells in pellets 500 microns thick stayed alive after 3 years in space. Once cultivated, they repaired their damaged DNA via the products of uvrA gene (nucleotide excision repair) and uvdE gene (UV-damage excision repair). For yet more detailed data with yet another Deinococcus, see here and for a movie of recent activities of this sort, click here. But what about gravity? Previous experiments (plus some even earlier ones by our friend Conrad Woldringh) showed that reduced gravity had little effect on the growth of E. coli. So, diminished gravity may not matter much for bacteria in space. 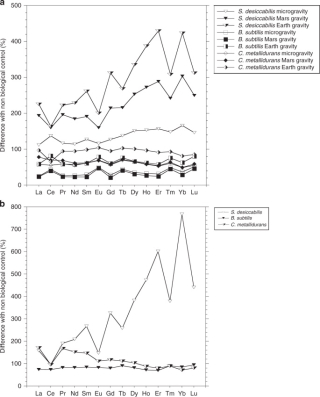 All this may well be relevant to long-term extraterrestrial colonization. Why? Among many other reasons, because bacteria can be used for mining needed minerals. That's true here on Earth and may be true elsewhere. Modern technology relies crucially on the use of rare earth elements (REEs), such as yttrium, scandium, and the lanthanides. They are used for making lasers, alloys, magnets used in cell phones, computer screens, and electric cars. But these minerals are not only hard to mine by conventional methods, but they need to be constantly replaced. How to ensure a good supply in space? Enter some species of bacteria that are able to extract minerals, a process called biomining. In fact, on Earth, some 10-20 % of all copper and about 5% of all gold is biomined (and that's probably just a start). Now for space. Prolonged stay on another planet or in space itself would require a way to replenish these essential components. Easy! Send up appropriate bacterial miners and let them do the work.

The question then arises, do microbiominers work in reduced gravity? Does biomining work under such conditions? An extensive piece of work by Charles Cockell and some 30 collaborators from a half dozen countries set out to find out. They also used the International Space Station as their lab, sending up slices of basaltic rock (similar to what is found on the moon and on Mars) and three different bacterial species, Sphingomonas desiccabilis, Bacillus subtilis, and Cupriavidus metallidurans. Using a set-up called the BioRock reactor, they incubated samples under various gravity conditions, from none to those simulating that on Mars and Earth (this can be done by using a centrifuge on board). After 21 days incubation, the samples were sent back to Earth for analysis. Of the three bacteria, only S. desiccabilis showed a significant amount of mineral leaching, about a factor of two increase, thus revealing that some bacteria are better miners than others. Interestingly, with this organism there were no detectable differences at the various gravity conditions. Why is this unanticipated? The senior author of the paper, Charles Cockell, said in an interview: "That surprised us, because without gravity, there is no convection that usually carries away waste from the bacteria and replenishes nutrients around the cells." And then, "One might then hypothesize that microgravity would stop the microbes from doing biomining or it would stress them to the point where they weren't doing biomining," he said. "In fact, we saw no effect at all."

Space microbiology? Surely this is a branch of our science that is here to stay. See a previous post in these pages. Who knows where this will end up?  Will training in space technology be included in microbiology graduate programs? Soon maybe? I would not bet against it.