« The Wonders of Microbial Domestication | Main | TWiM 233: Antivirals made by bacteria » 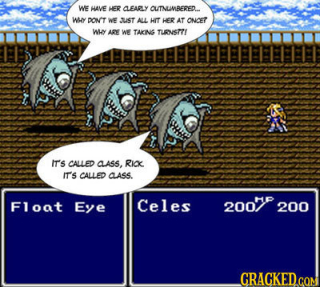 Figure 1. An example of mook chivalry that occurs during combat in the Final Fantasy video game franchise, as featured in "What Video Game Background Characters Are Thinking" and generated by user NintendoLemonz. Source

The phrase 'mook chivalry ' might not be  recognized by many of our readers, but the situation it describes will certainly be familiar: A hero faces a crowd of villains who are ready to attack. Rather than all charging simultaneously to overwhelm, they enter into the fight one at a time, politely waiting until the hero dispatches with the present challenge before encumbering the hero with a new threat (Figure 1).

Though originating as a derogatory term, 'mook' has come to be a synonym for 'cannon-fodder' to characterize seemingly incompetent masses of disposably standard-issue goons. Think of the target-missing Imperial Storm Troopers or Battle Droids of Star Wars, for example. The cliché of mook chivalry has been parodied throughout media, from the writing of Terry Pratchett, to a Saturday Night Live skit, to a comedic, but disturbingly violent, cafeteria fight scene in an episode of Family Guy.

In reality, fisticuffs and rumbles rarely proceed with any such one-opponent-at-a-time rule, and this holds true all the way to incidents of human-microbe rivalry. The global population currently remains captive, with attention riveted, to the SARS-CoV-2 pandemic and hopes for any/all of three promising vaccine candidates. Despite all focus on the coronavirus, some scientists (and the media) pointed out that the second wave of COVID-19 in Europe coincided with the typical start to the flu season; they wondered, how bad would it get if the human population became hit with not just one, but two pandemics, simultaneously.

Thankfully, that doesn't seem to be occurring, likely in part due to the use of masks and social distancing for coronavirus that would also help limit influenza transmission. But the general concern and point are valid. There is no chivalry among microbes to challenge us one at a time. While all our concern and efforts ramp up in response to coronavirus, other microbial threats are not simply going away or sitting aside as spectators. Amid societal disruptions brought on directly by the pandemic – or indirectly through inept political leadership – vaccination rates against other viruses, such as measles, have been further on the decline. And with all that focus on viruses, let us not forget about the continued emerging fungal pathogens, or the abiding threat of antibiotic resistance to bacterial disease outcomes.

Superbugs: An Arms Race Against Bacteria 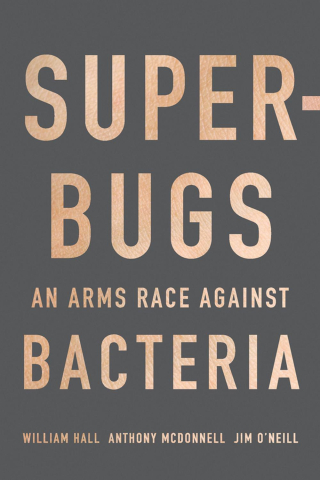 Published by Harvard University Press in 2018, Superbugs by Hall, McDonnell, and O'Neill (Figure 2) presents a well-documented argument for why we should be concerned about antibiotic resistance, with its relevance still applicable here two years later. According to 2019 estimates from the CDC, approximately 2.8 million infections and 35,000 deaths occur each year in the United States due to antibiotic resistance. Globally speaking, antibiotic resistance claims an estimated 1.5 million deaths per year. While we expect a single virus pandemic to pass relatively soon, the harm from antibiotic resistance could continue from decades past through decades future, worsening to a point where currently treatable bacterial infections could conceivably retake their place from cancer as the number one killer of humans.

Now, to borrow a clever alliteration from Mark Martin: all this might be preaching to the prokaryotic choir a bit here. Our readers are probably aware of antibiotic resistance from the historical, medical, ecological, cell biological, and molecular perspectives. A 2008 post by Joshua Fierer highlighted the good and the bad that antibiotics have brought us, and four years later a post by Marvin Friedman covered aspects of the evolution of resistance. 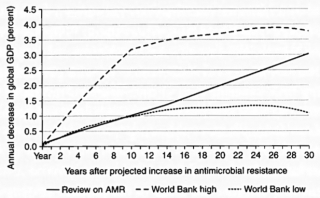 Figure 3. Annual decrease in global GDP (estimated) resulting from increases in rates of antimicrobial resistance, as presented in Figure 2.2 of Superbugs. Sources: World Bank and the Review on Antimicrobial Resistance

For those not versed in the realities of microbial drug resistance, the first two chapters of Superbugs cover the essential details, from the discovery of antibiotics to the almost immediate appreciation of bacterial resistance. The authors cover the basic microbiology alongside a brief historical narrative on the birth of germ theory and an outline of the general mechanisms of resistance. They focus most of their attention in their introduction on the societal consequences of antibiotic use on bacterial biology. They summarize and review studies that help quantify both the degree of the resistance problem and the costs it engenders, both economic and human (Figure 3).

The third chapter closes out the introductory part with an argument of why society has thus far failed to tackle the problem of increased antibiotic-resistant infections. They use data from studies and interviews with scientists and medical professionals to describe three factors that have played into the difficulty of dealing with antibiotic resistance: the difficulty of the science involved, failed economic models, and academic disengagement. The authors then conclude that "an infection with antibiotic resistant bacteria is only the last step in a long chain of events." To set up the second part of their book, they describe how this is analogous to Markov chains used by economists and other statisticians to predict outcomes and model interventions. The authors argue that a focus on treating antibiotic resistant infections represents a short-term strategy that fails to impact earlier elements in the chain such as infection, transmission, or the copious deposition of antimicrobials into the environment.

As you have likely gathered by now, Superbugs isn't like other books that focus on the microbiology surrounding antibiotic resistance. The authors come from backgrounds outside of biology. In 2014 they took part in an economic Review on Antimicrobial Resistance. Economist Jim O'Neill served as chair of that committee, and his two coauthors of Superbugs, William Hall and Anthony McDonnell were also members as senior policy advisor and head of economic research, respectively.

Superbugs therefore gives an outsider's perspective on microbiological/medical issues and centers on proposing a wide range of solutions to the problem of antibiotic resistance rather than just summarizing the problem and its mechanisms. The entire second part of the book, in five chapters, tackles that broad question of what best to do now for the future.

Chapter 4 discusses incentives that could be implemented for new antibiotic development. One example they introduce is the Combating Antibiotic Resistant Bacteria Biopharmaceutical Accelerator (CARB-X) initiative at Boston University School of Law, supported through the Biomedical Advanced Research and Development Authority agency and the Wellcome Trust. This public-private partnership was formed to fund clinical trials of promising novel antibiotics in a way that aims to minimize 'group-think' by having many smaller group partners make decisions rather than one large entity alone. The authors quote Kevin Outterson, the CEO, regarding how even well-meaning individuals can waste money on failed research: "If we know anything from history, it is that competent companies can make terrible decisions."

Returning to their Markov chain analogy at the end of the first part, the authors then delve deeper into arguments that prevention of antibiotic resistant infection is preferable to finding ways to deal with them after they occur. In a passage that begins with a quote from Val Curtis, the director of the Hygiene Centre at the London School of Hygiene and Tropical Medicine, the authors write:

““Drug-resistant infections are a result of infection, so if people weren't getting infected, they wouldn't need the drugs, and then we wouldn't get antibiotic resistance.” It is much easier to solve most problems, including that of drug-resistant bacteria, by preventing them before they start. The power of prevention was apparent during the outbreaks of Ebola and SARS, for which there was no effective treatment. These two diseases were greatly constrained and eventually defeated by preventative measures.”

They propose that things like better sanitation, improved infection control, and preventative medicines would enable greater success. Even simple things, like hand-washing make a huge difference, yet are largely not routinely followed. They cite a study of handwashing where 99% of those interviewed after using highway rest-stop bathrooms in the UK said that they had washed their hands with soap. However, electronic monitors indicated that less than half had actually done so (64% of women and an abysmal 32% of men).

Following into the next chapter on reducing antibiotic use, the authors address one of the largest hurdles to implementing their recommended measures: the difficulty of changing Ingrained human habits.

“It is much easier to convince someone to get a test for HIV, for example, than it is to convince them to always wear a condom during sex, or to wash their hands. Any campaign should thus focus on the minimal behavioral change necessary to achieve the desired effect. The best campaigns are based on emotions and peer pressure rather than facts.”

They then describe a successful campaign in India that changed behavior through stories featuring a kindly mother character who displayed good hygiene and child care, contrasted with a dirty, dislikable male character. I am reminded of the German Der Struwwelpeter stories my parents would haul out to encourage me in hygiene!

These Measures aren't Just Applicable to Bacteria and Antibiotics

It bears returning to the two quotes above with the realization that they say something not just about drug resistance or bacterial infections alone, but hold relevance for the broad issue of preventing any healthcare problem versus the short-term mistake of only dealing with it after the fact through treatment. We see the same issues now with SARS-CoV-2.

The power of prevention indeed was instrumental in controlling Ebola and the first SARS. However, they've also returned, and boy has the new SARS. But they have hardly been 'defeated.' In fact, that complacency and a breakdown in continued preventative measures and research likely augmented its unwelcome reboot. Even after initial outbreak and spread, continued refusals to face reality and implement preventative measures let us get to where we are now, certainly in the U.S.A. As This Week in x-ology podcast host Vincent Racaniello recently tweeted, "The headlines are saying that an early mutation MIGHT have made #SARS-CoV-2 harder to stop. I think more blame should be ascribed to human stupidity."

In a similar vein, can one now read the second quoted paragraph above on the difficulties of changing ingrained behaviors without thinking about anti-maskers? The similarities between our current viral predicament and the still-present antibiotic resistance predicament suggest, based on the Superbugs author's arguments, that common solutions exist and these could be the best focus for general protection of humans from microbial threats.

In the eighth, and final, chapter of Superbugs, the authors summarize their conclusions and propose the next steps for combating antibiotic resistance, stressing in their final paragraphs that this is "A Problem That Can Be Solved." Their proposals are not particularly surprising: education/awareness, economic incentives, political engagement, and above all coordination between diverse groups/fields/expertise. This includes the agricultural industry, the focus of chapter 7, which has had as much (if not more) of an impact on rising antibiotic resistance than the medical industry.

Even if not shockingly novel conclusions in general, they are helpful to see spelled out concisely after the bulk of the book that has reviewed specific examples of actions to continue exploring or expand. Those who are interested in this topic, but might not know as much from the economic and political perspective as the microbiological, will find Superbugs an immensely readable and indispensable resource. It has reminded me that microbes are never going to act like mooks. It's important that humans don't act like mooks either, or else we won't do well in the inevitable biological conflicts that arise through our interactions.