The Wonders of Microbial Domestication 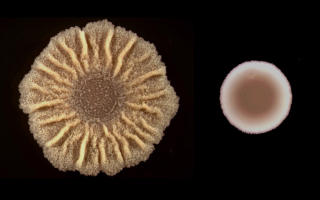 Figure 1. Bacillus subtilis grown on solid medium, a wild strain on the left and a domesticated strain on the right. The loss of wrinkling is due to loss of the ability to produce an extracellular matrix characteristic of robust biofilms. Source: Roberto Kolter

This morning, while running with the dogs, my mind drifted to thinking about how humans domesticated wolves, as far back as 20,000 years ago, to give rise to this remarkable mutualistic symbiosis. From there it was a small leap to start thinking about humans domesticating the many microbes that produce our beloved fermented foods and beverages. Such are the things I think of while running. The domestication of microbes is a topic that has fascinated me for decades.

But the reason that led me to the gain interest on the subject was not fermented foods. Rather, it was the recognition many years ago, that laboratory strains of Escherichia coli often harbor alleles that confer on them a growth advantage in stationary phase. Investigators unknowingly select for these mutant alleles because, well, they keep their cultures in stationary phase longer than they realize. Later on as part of a long-lasting collaboration with Rich Losick, in a study led by Anna McLoon, we traced the genetic bases for the domestication of laboratory strains of Bacillus subtilis. Surprisingly, the ability to sporulate is not often lost. But the ability to make robust biofilms is. Is it because we tend to grow this bacterium in liquid and we inadvertently select for strains that disperse well in the medium? 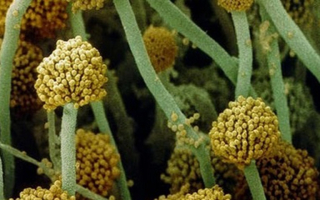 Once my appetite for microbial domestication was whetted, I began to get curious about how early humans, not realizing they were dealing with microbes, still managed to domesticate them. The thoughts during my run led me to conceive of this short post. And then I struck gold! Searching for relevant papers, I came across a "must read" for anyone interested in the subject: "Domestication of Industrial Microbes" by Steensels et al. This review is a treasure trove of all matters pertaining to human domestication of microbes. Yet, with all the information provided, I am still left wondering about how humans, eons ago, domesticated two fungi: Aspergillus oryzae (think sake, miso, soy sauce) and Rhizopus oligosporus (think tempeh). Comparative genomics show that these were domesticated from Aspergillus flavus and Rhizopus microsporus (see here for Elio's post on this fungus). Thing is, both of these ancestors produce numerous toxins that one would certainly not want to consume in fermented foods. How were humans, thousands of years ago, able to "breed out" these toxic traits when they were not really aware that they were dealing with microbes? (There is clearly a Talmudic slant to that question.) Seems very different than domesticating wolves to me.