Nothing takes you back in time quite like DNA, not ancient documents, not cherished tales, not ageless chronicles. Anyone studying human history today must take stock of the remarkable information recorded in DNA. Major advances in DNA sequencing and its extraction from ancient bones and teeth now provide unpreced­ented windows into major events in human history and evolution. Using ancient DNA we have uncovered details of key episodes such as the inter­breeding between Neanderthals and modern humans, the complex history of pig domest­ication, and the prehistoric expansion of the plague, among many others. Recently, DNA from human remains helped bring new precision to the period of early contact between Native Americans and Europeans in the Americas.

When Jared Diamond wrote of the collapse of Native American civilizations in his 1997 book Guns, Germs, and Steel, he was relying on decades of work by historians, archae­ologists, and anthrop­ologists who had pieced together a story that has largely held true as additional evidence came to light. Notably, Eurasians and Native Americans lived completely isolated from each other for than more 10,000 years. While both human pop­ulations achieved agricultural advances, only Eurasians developed large-scale farming of domest­icated mam­mals like cattle. Zoonotic diseases thus emerged and circulated in dense Eurasian populations that lived in close proximity to the animals. Over thousands of years, these humans developed some resistance to these diseases, while Native Americans remained unexposed and un­protected. For all the technological ad­vantages and genocidal intent that Europeans brought with them to the Americas, it was mostly the diseases they carried that led to the collapse of many Native American societies. Traditional historical chronicles often describe the symptoms of these diseases, but molecular tools are required to unambiguously identify the causative agent. Where can a molecular archae­ologist go searching for evidence of an ancient infectious disease? Burial grounds dating to the times of historical epidemics are certainly great places to start! 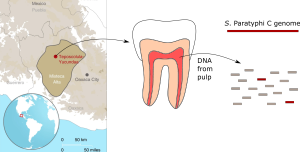 Fig. 1. DNA extracted from ancient remains in pre-contact and early contact Native American cemeteries in Teposcolula-Yucundaa was used to identify a candidate causative agent of cocoliztli. Source for map, drawings by author.

A 2017 study at a burial site in Oaxaca, Mexico, found that ancient DNA was well preserved there. In add­ition, the study established that some of the people buried there had died in 1545–1550 during an epidemic of a myster­ious disease referred to by con­temporary Native Americans as cocoliztli, which translates to a vague "great pestilence." But from the descrip­tion of the symp­toms of the disease, it could have been due to any number of infectious agents. Here was a great oppor­tunity to use molec­ular archaeology to identify the culprit. And that is exactly what the authors of a subsequent study did.

The authors extracted and sequenced DNA from the pulp of teeth of individuals buried in both pre-contact and early contact cemeteries in the Teposcolula-Yucundaa site in Oaxaca. It has long been known that dental pulp is an excellent reservoir of the DNA of ancient microbes that caused systemic infections or sepsis. This ex­tracted DNA includes human DNA, DNA from soil microbes and, impor­tantly, DNA from microbes that may have caused infections. Sequencing yields millions of fragments of DNA sequences known as "reads." To specifically detect the presence of bac­terial DNA among the reads, the authors utilized a new tool they dev­eloped called the Metagenome Alignment Tool (MALT). Using MALT, the authors aligned the reads with a large reference panel of more than 6,000 known bacterial genome sequences and looked for matches. 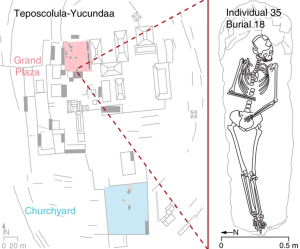 Fig. 2. Left: Drawings depicting the locations of the early contact epidemic cemetery (Grand Plaza) and the pre-contact cemetery (Churchyard) at the site. Right: Drawing of a single individual buried at the Grand Plaza cemetery. Source for map, drawings by author.

The authors detected genes from Salmonella enterica subsp. enterica serovar Paratyphi C (S. Paratyphi C), the causative agent of enteric fever in humans, in ten out of 24 individuals from the early contact cemetery, but not in five pre-contact individuals or in the surround­ing soil. They then designed probes to specifically capture DNA from S. Paratyphi C from the ten positive samples, while using the five pre-contact in­dividuals and the soil sample as controls. Assembling the sequencing reads from the positive sample DNA enabled them to reconstruct five complete individual S. Paratyphi genomes. Finally, they identified specific differ­ences between these recon­structed genomes and modern S. Paratyphi that may have allowed the ancient bacteria to more effectively invade host tissues and possibly spread faster between hosts.

The authors point out the need to be cautious about their central assertion that S. Paratyphi C was likely the causative agent of cocoliztli. Their ability to detect pathogens was restricted to the genomes that were present in the MALT reference panel, which makes it difficult to exclude the possib­ility of some unidentified pathogen, either on its own or in conjunc­tion with S. Paratyphi C, being responsible for the epidemic. A larger number of samples would also help build greater support by showing consistent pres­ence of the bacterium in individuals from the epidemic cemeteries. To provide more support for the hypothesis that the disease was intro­duced by European col­onizers, it would help to demonstrate the bacterium's absence in a larger number of precontact individuals.

Despite these concerns, we do know that S. Paratyphi C was present in pre-contact Europe: in 2020, the group behind this study went on to reconstruct the evolution over 5,000 years of human-adapted S. Paratyphi C from predecessors infecting multiple mammalian hosts in Western Eurasia. They linked the pathogen's evolution to the emergence and spread of agri­culture. An additional 2018 study from a differ­ent group reported the presence of a S. Paratyphi C genome in the teeth and bones of an individual from 1200, excavated in Norway. While S. Paratyphi C infec­tions today make up only a small percentage of the total cases of enteric fever, it is conceivable that it was more common in the past. This bacterium is also known to persist in and spread from asymp­tomatic hosts and could have thus migrated in asymp­tomatic travelers from Europe and subsequently passed on to the susceptible natives.

Other studies over the past two years have also identified pathogens in ancient remains, and explored the origins and phylogeography of the bacteria that cause leprosy, tuber­culosis, and the plague, among others. For the plague in particular, such studies have linked early spread of the bacteria to the Neolithic population decline 5000-6000 years ago, traced the origin of strains that cause the flea-transmitted, bubonic form of the plague, and explored plague dynamics in 18th century Eurasia. A recent review by Arning and Wilson provides for great further reading on the field of ancient bac­terial DNA. These studies illus­trate how ancient genomics are being used more and more to test prominent historical and archae­ological hypotheses, as well as to add more specific detail. We now know of the presence of patho­genic bacteria of Eurasian origins in many of the remains found in an early contact period Native American epi­demic cemetery. While we're almost certainly missing many pieces of the puzzle, at least the pieces we currently have all seem to fit into a congruent picture. 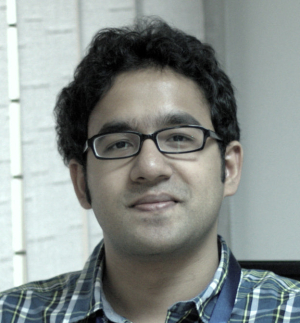 Ornob Alam is a graduate student in Michael Purugganan’s lab at New York University. His PhD projects examine the demographic and evolutionary history of domesticated Asian rice in the context of past climate change and human migrations.