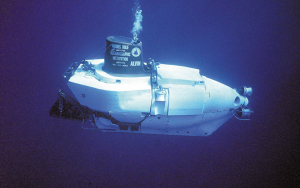 Some thirty years ago it was my good fortune to sit in an air­plane next to the famed marine micro­biologist, the late Holger Jannasch, of the Woods Hole Oceanographic Institution. He shared with me stories of his deep-sea explor­ations, especially his voyages in the sub­mersible Alvin. These included visits to the recently discovered deep sea hydro­thermal vents and the amazing life forms that thrive in their vicinity.

The most spec­tacular of the denizens at these sites are the giant tube worms, Riftia pachyptila, which are white cylinders some 2 meters tall and ca. 4 cm thick. They are capped by red plumes (the name pachyptila comes from the Greek παχύς, "thick" and πτίλον, "feather"). A patch of Riftias may occupy tens of square meters, thus is visible from a distance to passen­gers in a vessel like Alvin.

Holger described the amaze­ment caused when seeing arrays of these sizable structures after travel­ing for hours along the mostly barren sea floor. But before getting into this, let me recount his surprise at finding that when Alvin sank prev­iously with no crew­men on board, their lunch of apples and baloney sand­wiches was found upon recovery to be water­logged but nearly intact. Holger under­stood that under those conditions of pressure and tem­perature, eubacteria meta­bolism was greatly slowed down.

Back to the giant tube worms. They sport a prom­inent top, a "branchial plume," its tentacles are red in color for being stuffed with hemo­globin (of all things), whereby oxygen and hydrogen sulfide are carried below, to the 'trophosome'. This is a vas­cular­ized tissue that pretty much fills the cavity. It contains billions of bacteria within spe­cialized cells, the bacterio­cytes. The bacteria are mutual­istic sym­bionts that provide their host with the organic material they synthesize. A main source of nutrition for the worm are the bacteria them­selves, which are eventually digested into usable com­pounds. The required energy is produced by the bacteria by oxidiz­ing hydro­gen sulfide, a form of auto­trophic carbon fixation. It and oxygen are provided by the worm, which has no digest­ive system. In addition, the tropho­some cells contain sulfur granules that likely serve as energy reserves. 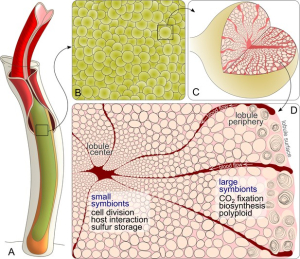 R. pachyptila has a sym­biotic relation­ship with a number of differ­ent auto­trophic bacteria. One of the best studied is a gamma­proteo­bacterium called Candidatus Endoriftia persephone (Candidatus means that it has not been cultivated yet). In sections of the tropho­some, the bacteria are differ­ent in size: some are small rods, others large cocci. The smaller ones (ca. 2.0 to 5.0 microns in dia­meter) are found near the center of each lobule, close to a central blood vessel. The larger ones (5.0 to 20.0 microns) are located towards the per­iphery of the lobules, where they are eventually de­graded and used for food. Only the small cells are able to divide, although the larger ones do replicate their DNA. The question arises, do these different kinds of cells of the same species carry out different meta­bolic func­tions? This is suggested by their high degree of metabolic redun­dancy, such as carrying the enzymes for two ways to fix carbon dioxide (the Calvin cycle and the reverse TCA cycle) and the enzymes for both making glyco­gen and degrading it. There is more, adding to the belief that these sym­biotic bacteria may be hetero­genous in their physio­logical functions and that they divide their tasks among them. Are these physio­logies appor­tioned among the small and large bacteria? Isn't this hinted at by their distinct loc­ations within the lobules of the tropho­some? 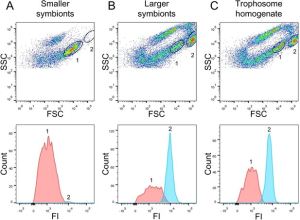 Fig. 4. Flow-cytometry-based DNA quantification of Riftia symbionts. (A) Dot plot of forward scatter (FSC) and side scatter (SSC), and histogram with fluorescence signal counts and fluorescence intensity (FI) per particle of a gradient fraction enriched in smaller symbionts. (B) Gradient fraction enriched in larger sym­bionts. While cell population 1 was more prominent in (A), population 2 was almost exclusively detected in (B), and both pop­ulations were present in non-enriched tropho­some homogenate (C). Source.

In a recent paper (first author is Tjorven Hinzke, last author, Stephanie Markert), cells of the two cell types were isolated from tropho­some tissue homo­genates by gradient centri­fuga­tion and their proteom­es analyzed. In addition, the bacteria were studied by fluor­escence in situ hybrid­ization, hybrid­ization chain reaction, flow cyto­metry, and electron micro­scopy. The proteomic analysis told them that of some 2000 total symbiont proteins, 465 differed in abun­dance between the two cell types. These included proteins involved in the bacterial cell cycle and DNA replic­ation and repair. FtsZ, DNA gyrase, and DNA binding proteins were more abun­dant in the small cells, while others that are in­volved in cell division (FtsE, MreB, SmlA) were in­creased in the large cells. Chap­erones and the likes, outer membrane trans­port proteins, and proteins of carbon meta­bolism also showed differ­ences in the two kinds of cells, as were proteins involved in chemo­trophy. For the actual distrib­ution of the proteins, see the article. Here you will also find a thorough dis­cussion of the number of genome copies per cell (higher in the large symbionts) and chromo­some com­paction (lesser in the large cells). Also dis­cussed are differ­ences in sym­bionts rich in sulfur and depleted of it.

The authors also discuss the role of poten­tial symbiosis-specific host proteins, the fact that the small sym­bionts may be exposed to higher stress levels and involved to a greater extent in host-microbe inter­actions. The division of labor goes some­thing like this: Carbon fixation and bio­synth­esis are mainly the job of the large cells (in the words of one reviewer, they are the "work­horses," survival is the role of the small ones, the "stem cells"). The general con­clusion is that the sym­bionts under­go differ­ent develop­mental stages, leading to physio­logical hetero­geneity within their pop­ulation.

Sym­biotic bacteria do not stay put but freq­uently undergo differ­entiation. But rarely are they found in such a fascinat­ing host as the giant tube worms, where they divide up their labors in such elegant man­ners. Giant tube worms are fascinat­ing by them­selves. The story of their sym­bionts adds consider­ably to their fascin­ation.