Antibiotics and the Foods We Eat

When it comes to the animals that humans raise to eat, a quick look at their numbers proves sobering. Worldwide, there are some 650 million pigs, 1 billion heads of cattle and 26 billion chick­ens. Such numbers cannot be achieved by traditional animal rearing practices that use ex­tensive surface areas. Rather, most of these animals are grown at very high populations densities in what is termed intensive production. Aside from the fact that most of these animals will end up as food, there's one more thing they have in common. The only way that such intensive animal husbandry is possible is through the use of antibiotics. It is no surprise that around 70% of the world's total production of antibiotics is used in animal husbandry and agriculture. That's approximately 70 billion grams of the estimated 100 billion grams (that's 100,000 metric tons) of antibiotics produced every year worldwide. 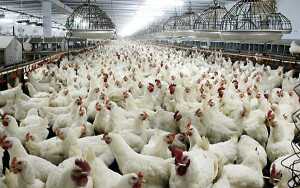 There are three ways in which antibiotics aid in intensive animal husbandry: therapeutically, prophylactically and as growth promoters. To use an antibiotic to treat a sick individual makes sense. But since so many animals would end up sick under the growth conditions used, there is widespread prophylactic use to keep them from getting infected. And, lastly, there is the use of sub-thera­peutic doses of antibiotics to promote animal growth. This latter use is particularly problematic in terms of the spread of resistance, so the practice is now under surveil­lance in many countries with varying degrees of success. The problem is, it is difficult to draw the line between prophylaxis and growth promotion. As a consequence, worldwide use of antibiotics in animal husbandry continues to increase despite hard efforts and promising legislation. Because most of the antibiotics fed to animals are not absorbed and are only slowly degraded, most of them end up in soils and effluents. Today, it is difficult to find pristine environments that are free of industrially-produced antibiotics. In addition to the obvious problems related to the spread of resistance, such massive use of antibiotics is helping to fuel the increase in many of the "diseases of modernity," for example, obesity, asthma, allergies, diabetes and certain forms of cancer, as has been convincingly argued by Martin Blaser in Missing Microbes. How did we get into this mess? A brief look at the history of antibiotic development and use provides an answer to this question. 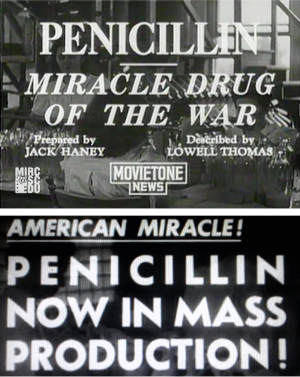 It took more than a dozen years from Fleming's discovery of penicillin in 1928 to the first successful clinical uses of penicillin in the early 1940s. All along, only minute amounts of the antibiotic could be obtained. In 1942, when 0.3 grams saved Anne Miller's life, only a few grams were available worldwide. But the world changed drama­tically during the ensuing years, from the economic de­vastation of the Great Depression to the widespread hor­ror of World War II. As was the case in all prior wars, more soldiers were dying from infections during that war than anything else. Once the remarkable curative power of penicillin was recognized, the idea that wound infec­tions need no longer claim so many lives took hold and justified the massive scale up in the production of the "miracle drug of the war." The war mentality cast any ecological considerations aside and the war economy permitted a huge infusion of funds to achieve the scale up. From a few grams in 1942, production skyrocketed to 4000 kg per month by the end of the war. In the process, the pharmaceutical industry became big business. With that large production capacity there was a growing need for new mass markets, beyond the treatment of infections. Serendipity would play a big role in finding a new market for antibiotics.

Following the discovery of streptomycin by Albert Schatz and Selman Waksman in 1943, a multi­tude of pharmaceutical companies set out to discover novel antibiotics from soil bacteria. Scien­tists at Lederle Laboratories of American Cyanamid discovered once such bacterium, one that formed golden colonies and produced a gold-colored antibiotic. They named it Streptomyces aureofaciens (the gold maker), alluding to their hope that it might bring in real gold to the com­pany. The antibiotic, the first of the tetracyclines discovered, was named aureomycin. At the same time at Lederle, Thomas Jukes and Robert Stokstad were involved in attempts to find a cure to pernicious anemia (now known to be due to a vitamin B12 deficiency). They had developed an animal model system for the disease using recently hatched chickens and keeping them on a starvation diet. These chickens could be rescued by liver extracts and the rescuing activity was later shown to be due to vitamin B12. Looking for sources of similar activities, they also fed the chickens the waste left over from S. aureofaciens fermentations. On Christmas Day, 1948, because his technician was home for the holiday, Jukes went in to check on his chickens. The S. aureo­faciens fermentation leftovers rescued the chickens from certain death. More strikingly, those chickens were much bigger and fatter than the control group. Soon thereafter, Jukes showed that the growth promotion was due to the trace amounts of aureomycin in the feed. Thus, out of serendipity was born the practice of using sub-clinical doses of antibiotics to promote animal growth.

On April 9, 1950, the Lederle lab scientists announced their results at the American Chemical So­ciety annual meeting. Here are some of the statements from the New York Times article covering the announcement, entitled 'Wonder Drug' Aureomycin Found to Spur Growth 50%.

"The discovery of the new role for aureomycin, described in the announcement as 'spectacular,' is believed to 'hold enormous long-range significance for the survival of the human race in a world of dwindling resources and expanding populations."

"Five pounds of an unpurified product, selling at 30 to 40 cents a pound, when ad­ded to a whole ton of animal feed, the report states, 'has increased the rate of growth of hogs by as much as 50 per cent.' Similar results have been obtained in chickens and turkeys."

"Clinical investigations on humans subjects, to check on the possibility that aureo­mycin's hitherto unsuspected nutritional powers may also aid the growth of mal­nourished and undersized children, in addition to extending the world's meat sup­ply and decreasing its cost, are now under way, the report states."

And, finally, "No undesirable side effects have been observed." 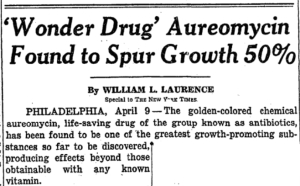 The race to produce more and cheaper animal protein had just received a major boost, one that would drive humans to ever increasing consumption. This was in ac­cord with the mentality of the time, with little or no re­gard for possible ecological consequences. Fast forward to today and there seems to be no end in sight to the continued increase in the tonnage of antibiotics pro­duced and ab­used annually, despite so many worldwide attempts at slowing things down.

Despite the grim outlook, I think there are reasons to feel at least a little optimistic about the future. The world's mindset has changed dramatically to in­clude ecological implications of food production practices. For many people, climate change is now front and center as a key issue. They are thus becoming more and more aware of the hidden costs (what economists refer to as 'negative externalities') of the foods they consume. Still, the demand for cheap animal protein continues to grow and producers, if they are to remain competi­tive, must keep up the supply through intensive practices. The solution, it appears, will not be solely through legislative measures. No, the sources that supply cheap protein that con­sumers will want to consume has to be replaced from animal-based to plant- and fungus-based. And it is there that I see reasons to be optimistic. Starting with Pat Brown's Impossible Foods and contin­uing with a very large number of new enterprises, there is a clear shift towards producing very tasty alternative sources of protein that may someday reduce the burden on the planet currently caused by intensive animal protein production. Since microbes will undoubtedly be involved, I hope to be telling you about progress in that area in the near future.