We return to our yearly "Fungomania," a series posts on the wonderful world of fungi. 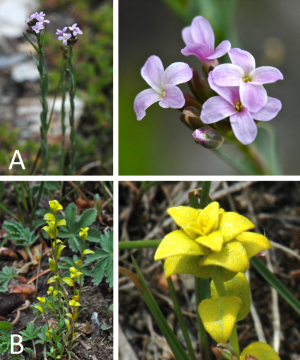 Nature seems to be intent in fooling everyone, experi­enced botanists included. An example is seen in the abi­lity of some fungi to change the terminal leaves of certain mustard plants into what look like floral petals, making them look like real flowers. Pollinating insects are attract­ed to them and land on these structures to cover them­selves with spores, which they then spread in the neigh­borhood. Such infected flowers look like buttercups in­stead of those of the original plants. We discussed this topic in these pages before. Let me copy some of it:

"Making pseudoflowers is not cheap and calls for a major reprogramming of the host transcriptome. As shown in a detailed international study, the rust fungus Puccinia mo­noica does just that when infecting a member of the mustard family, Boechera stricta. Here, the pseudoflow­ers resemble buttercups. The authors found that 256 processes are significantly altered in the pseudoflowers." 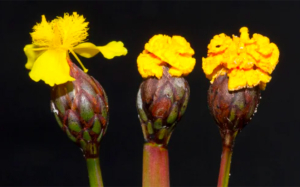 Figure 2. Two orange-yellow "blooms" at right are fungal mimics of flowers produced by yel­low­eyed grasses, such as the one at left. Credit: K. Wurdack Smithsonian Institution. Source

It gets even better. Instead of simply coating leaves with spores, there are fungi that completely modify the leaves, such that they become entirely fungal tissue. This hap­pens to plants in the genus Xyris, the so-called yellow­eyed grasses. A paper by a group led by the Smithson­ian's Kenneth Wurdak tells how they found in Guyana two kinds of Xyris that when parasitized by a fungus, Fu­sarium xyrophilum sport 'flowers' that look different both in color and shape. The infecting fungus sterilizes the host plant, keeping it from making its normal blooms. It now induces the plant to make the fungus-laden pseudo­flowers (just how it does this remains to be discovered). The new structures attract pollinating insects, which spread the fungal spores all over the place. In fact, the fungus tries hard to make itself attractive to the insects by reflecting UV light at a wavelength that the insects can detect. In addition, it appears that the fungi emit different aromatic compounds that can be perceived by the insects.