Sympatry means that two species coexist in the same physical area, allopatry that they don't. The etymology of the suffix patris, helps. It comes from the Latin for 'fatherland,' as in 'patriot' (or, for those who remember the Marseillaise, "Alons enfants de la Patrie"). 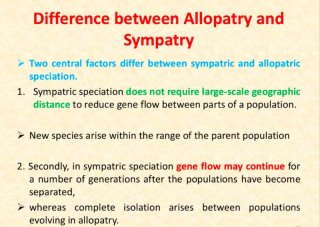 The most common use of these terms is in connection with speciation. Sympatric speciation is the evolution of a new species from an ancestor with which it shares its habitat. Contrariwise, in allopatric speciation, geographically separated species evolve without genes flowing between them. Related terms are "parapatric" and "peripatric."

There is considerable discussion about the extent of these phenomena in both eukaryotes and prokaryotes. Many disparate factors seem to be at play, and so are definitions. Examples for prokaryotes can be seen in such articles as, among others (here, here, and here).