Towards a More Open Science

If there's a silver lining to these very trying pandemic time, it's a sense that the scientific communi­ty is moving more in the direction of open science. In the pre-pandemic era (which now feels eons ago) we commented on the problems with for-profit publishing and offered optimistic outlooks in terms of novel publishing strategies such as public reviews and preprint repositories. The steadily increasing number of investigators that post their manuscripts in these repositories and the initial moves to incorporate peer review into them are part of what I see as a very healthy move towards a general opening up of science. While completely anecdotal, I feel that during this past year peo­ple have been much more willing to openly share their results and, importantly also their re­sour­ces, for a common good. I still hear people not wanting to "talk about those results because we'll get scooped," an attitude that is beginning to feel archaic. But mind you, this culture of secrecy in science – which thankfully appears to be eroding – was not always prevalent. This was quite evi­dent to me when I visited the Carlsberg Research Laboratory in Copenhagen. 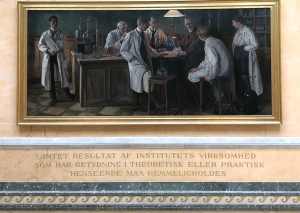 During my stay in Denmark in 2019, I was fortunate that my friend and colleague Charlotte Held Gotfredsend ar­ranged for us to visit the Carlsberg Laboratory, the famed research institute associated to the Carlsberg Brewery since its inception in 1875. The laboratory is well-known as the place where the first lager yeast, Saccharomyces carlsbergensis (aka S. pastorianus), was obtained as a pure culture by Emil Hansen in 1883 and where Søren Sørensen devised the concept of pH in 1909. But what really struck me about this laboratory was its clearly stat­ed philosophy, prominently displayed in the main entry:

Which translates as: "No result of the Institute's activities which is of significance in theoretical or practical terms must be kept secret." Here was a research laboratory which, despite its being part of the brewing industry, was advocating for completely open science. It's a philosophy that we should all do well to follow.