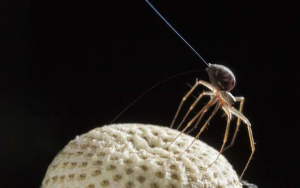 You've probably heard of spiders that fly without wings. They climb onto flowers or leaves leaves, stand on their tiptoes, and push gossamer threads of silk from their spinnerets, glands in their abdomen, and take off (Figure 1; see also this video). They do that to reach a nearby twig when weaving their webs or to make long-dis­tance flights, sometimes over hundreds of kilometers. This be­havior has been called 'ballooning' or 'kiting,' re­ferring to passive aerial movements. (recent research suggests that also atmospheric electrostatics plays a role.) But have you ever heard of 'ballooning' or 'kit­ing' bacteria, marine cyanobacteria, to be precise, and underwater? Me nei­ther, that is, until last week. Here goes...

It has long bothered microbiologists that the highly abundant marine picocyanobacteria of the Syn­echococ­cus and Prochhlorococcus families are found preferentially at defined depths in the water column. The high-light adapted (HL) Prochlorococcus MED4 ecotype, for example, inhabits the uppermost layer of the photic zone while the low‑light adapted (LL) MIT9313 ecotype is found at depths below 150 m. The picocyanobacteria lack flagella for swimming or gas vacuoles for flota­tion. How then can the planktonic picocyanobacterial cells in suspension − they rarely encounter any kind of surface in their natural habitat − combat the downward pull of gravity? Aguilo-Ferret­jans et al. addressed this issue in a study just published (Open Access.)

The vexing question was not helped much by their finding that a quarter of the picocyanobacteria have in their genomes gene sets for the synthesis of Type IV pili (T4P). These gene sets are similar to those known from freshwater cyanobacteria. Synechocystis and Synechococcus elongatus use pili for transformation and twitching motility. Picocyanobacteria don't surf around on surfaces! 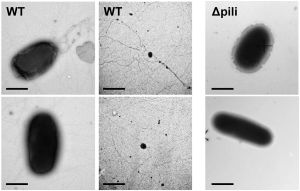 Figure 2. TEM images of long pili appendages ob­served in wild-type (WT) Synechococcus sp. WH7803, absent in the pili mutant (Δpili). Mid­dle panel image, obtained with the same mag­ni­fication as other panels, is from an intercel­lu­lar region bet­ween WT cells to improve the vi­sua­lization of the pili. Scale bar 1 μm. Source

While the similarity to S. elongatus PCC 7942 pili genes helped annotate the pili genes set of picocyanobacteria, what has really helped were the findings, by screening of metatranscriptomics data sets, that the major structural component of pili, the PilA1 protein, is expressed in sea­water samples worldwide. Likewise, PilA1 is expressed in relatively easy-to-cultivate Synechococcus sp. WH7803 and readily detected in its exoproteome. And finally, they saw complete pili of WH3801 in the electron microscope (Figure 2, left and middle).

The logical next step was, of course, to "make" a Δpili mu­tant to find out what function(s) they have. "Making" any kind of mutant is a matter of days, if you work with E. co­li, Pseudomonas, Vibrio, or Caulobacter. Not so for the pi­cocyanobacteria. First, they are slow-growers with gene­ration times in the range of 1−2 days un­der optimized conditions and transformations can take several months. Second, their transfor­mation cannot be done with 'naked' DNA but requires conjugation, which is a tad more tedious and has low yields. Third, as purely planktonic cells the picocyanobacteria fiercely resist colony formation and need a helper bacterium that prevents their self-intoxication by metabolic waste. These helper bacteria must be removed in a counter-select­ion step (in liquid culture) to finally obtain axenic mutant isolates. But they were able to obtain the mutant. And yes, they didn't see pili in the mutant and found no PilA1 in its exoproteome (Figure 2, right). 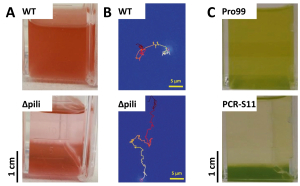 Figure 3. A Non-shaken cultures of wild-type (WT) and pili mutant (Δpili) Synechococcus sp. WH7803. The pili mutation and phenotype has pro­ven very stable and is consistently achieved af­ter 3–4 days with the mutant unable to re­main in a planktonic form when not sha­ken. B Ex­ample of a tracked suspended cell from a WT and Δpili mutant culture of WH7803 (in total, 2614 WT and 439 Δpili cells were trac­ked). Tra­cking was over 100 s and move­ment is indi­ca­ted from dark red (start) to yellow (end). C Non-shaken Prochlorococcus sp. MIT9313 cultures grown in Pro99 medium (upper panel) and PCR-S11 medium (lower panel). The appearance of cells in the image is consistently achieved after 2–3 days of no shaking. PilA1 (PMT_0263) was on­ly detected in the exoproteome of suspend­ed cultures. Source

Flow cytometry analyses confirmed that wild-type and pili mutant cells have virtually the same size. How then do wild type and Δpili mutant cells differ other than having or not having pili? In static cultures, wild-type cells easily stayed suspended for 3–4 days while Δpili cells rapidly sank to the bottom (Figure 3A). The authors found that this is not a property of cell aggregates, but a property of single cells. They followed the trajectories of hundreds of cells (for details see the methods section of the paper) for 1, 2, or 5 minutes each, with a recording rate of 1 fps. Δpili cells followed a pretty straight downward path, dri­ven by gravity (Figure 3B). Wild-type cells, however, hov­ered more-or-less horizontally. They defied the pull of gravity and tumbled horizontally due to Brownian motion of the small molecules (H2O!) in the medium. Since pili are not propelling like the 'motorized' flagella, the cells were not actively 'swimming' but rather 'kiting,' thus the title of this post (no 'ballooning' here as thermals weren't involved).

What could cause the cells to make pili in the first place? A valuable hint came from their observation that wild-type cells of Prochlorococcus MIT9313 sank when grown for 2−3 days in nutrient-poor medium but remained suspended when grown in nutrient-enriched medium (Figure 3C). In addition, their PilA1 protein was only detected in the exoproteome of suspended cultures. So, could nutrients trigger the formation of pili, or the extension of already existing ones? 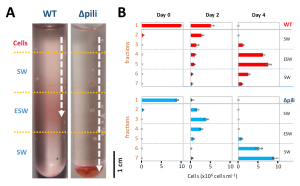 Figure 4. Retention of pili-producing Synecho­coccus in nutrient-rich fractions within the wa­ter column. A Nutrient step gradient column where WT and Δpili cells of WH7803 were pla­ced at the top. Nu­trient deplete (SW) and nu­trient enriched layers (ESW) are indicated. Cells were harvested by centrifugation from late-ex­ponential cultures grown under optimal condi­tions and resuspended in SW before placing them on top of the column. The arrow indi­cates the trajectory made by the cells, and where they accumulated after four days. Images re­pre­sent one of three culture replicates. B Nu­trient layers were set up as described in A. Sy­ringes (10 ml) were used to facilitate the har­vest­ing of the seven fractions. Cells from WH­7803 (WT, red) and pili-mutant cultures (Δpili, blue) were diluted to ~107 cells/ml in oligotro­phic seawater and placed on top of the column. 100 μl were harvested from each one of the fractions (~1 ml) at an initial time point and at days 2 and 4. Cells were quantified by flow cy­tometry. Data are presented as mean values +/- standard deviation from three independent co­lumns. Source

They tested this in a simple yet elegant approach by plac­ing a layer of pre-cultured Synechococcus sp. WH7803 wild-type and Δpili mutant on top of a medium gradient in which the cells would, without shaking, first sink into a nutrient-poor zone due to gravity. Sinking cells would sub­sequently encounter a nutrient-enriched zone before sinking further into an again nutrient-poor bottom zone. The Δpili mutants sank continuously through the three zones, and reached the bottom after 4 days (Figure 4B). In contrast, wild-type cells sank less rapidly overall and accumulated predominantly in the nutrient-rich zone af­ter 4 days (Figure 4B), even visibly (Figure 4A). An impor­tant control by flow cytometry revealed no aggregates but only planktonic cells for both the wild-type and the Δpili mutant. From these results, the authors conclude: "This pilus, widely distributed and expressed amongst dominant marine oligotrophic cyanobacteria, allow these purely planktonic organisms to increase cell drag and, consequently, maintain an optimal position in the water column. This mechanism responds to discrete stimuli e.g. nutrients, which may vary depending on the ecological adaptation and preferred niche of each individual or­gan­ism." But there's more to it than just flying kites...

Aguilo-Ferretjans et al. thought it likely that, these Syn­echococcus cell surface appendages would modulate ecological interactions with other organisms, namely bacterivorous protozoa − known in the field as "grazers" − and cyanophages. Both groups are considered key population regulators of the picocyanobac­terial populations in aquatic environments − besides death by sinking below the photic zone, of course. Regulators, because it's a long-standing obser­vation that picocyanobacteria double every 1-2 days yet their concentration (cells/ml) is fairly constant over shorter time periods at a given sampling site. "Someone" must be responsible for the disappearance of half of the picocyanos every 2nd day, right? The role of phages as regulators could not be tested because no cyanophage is (yet) known to bind to pili. But what's about the "grazers"? 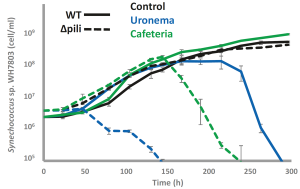 The authors showed that the pili reduce the susceptibility of wild-type cells to grazing by the ciliate Uronema and the flagellate Cafeteria, likely by interfering with the way these predators access their prey. They found in co-cul­tures of wild-type cells and Uronema that the bacteria in­creased in population size roughly 20‑fold before effi­cient grazing reduced them to concentrations below the inoculum within 12 days (Figure 5). In sharp contrast, the Δpili mutant in co-culture with Uronema declined in po­pu­lation size right from the start and was reduced to con­centrations below the inoculum within 6 days. Also in co-cultures, Cafeteria flagellates didn't succeed in hunting down wild-type bacteria for up to 300 h but happily snacked on Δpili mutant cells when these had increased in population size 20‑fold, then rapidly reduced them (Fi­gure 5). Apparently, the pili‑lacking prey had to be pre­sent in greater numbers and thus in closer proximity to the Cafeteria predators to whet their appetite. So, de­spite differences in the 'predation kinetics', the pili protected Synechococcus significantly from grazing by both protozoans tested.

Kiting under water and fending off predators add to the impressive list of functions Type IV pili play in bacteria. Craig et al. summarized in their recent review: "The T4P are unique in that they are dynamic: filaments polymerize and depolymerize, leading to rapid cycles of extension and re­traction that generate considerable mechanical force. This feature enables T4P to pull adherent bacteria along mucosal surfaces [twitching motility] into close association with host cells and other bacteria, to exert forces on host cells, to pull bound substrates like DNA [see here in STC, and do not miss Courtney Ellison's movie of Vibrio T4P 'at work'] and bacteriophages into the periplasm and to export exoproteins across the outer membrane. T4P extend and retract at rates of ~1,000 subunits per second, requiring a complex protein machinery that spans both membranes of Gram-negative bacteria [see here for a diagram. Source]. T4P are present on a diverse range of bacteria, including M. xanthus, C. crescentus and T. thermophilus, as well as important human pa­thogens such as N. gonorrhoeae, P. aeruginosa and V. cholerae." Now we know that pili are also present and functional in the 'classical' way in freshwater cyanobacteria and, with a novel, so far unknown function in a quarter of the marine picocyanobacteria. Of course, and because it's sci­ence after all, this leaves open the question of what tricks the other three quarters of pico­cyano­bacteria have in store to stay put in their comfort zone and avoid sinking in the water column be­low the photic zone...