Fungomania II. A (not so) new face of Fusarium

This is our second post in this year's Fungomania series, see here for Fungomania I. 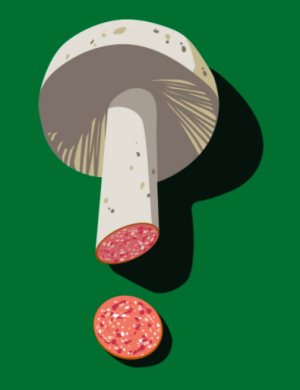 This is a story about fusaria by an admittedly non-expert. Much of what I write in this post I just recently learned, thus revealing from the start my naïveté on the fasci­na­ting sub­ject of fungi as high protein foods. By sheer co­incidence, when I was researching the literature in pre­paration for my recent post "Antibiotics and the Foods We Eat" I read Frank Bruni's Op-Ed piece in the New York Times "Is the Burger Near Extinction?" Bruni describes the recent "meatless gold rush" – the proliferation of companies aiming to mass pro­duce alternative protein sources to replace livestock and the increase in consu­mer interest in these alternatives. This "gold rush" in­cludes refining plant-based products to im­prove taste and texture and the still very expensive use of stem cells to generate "lab-grown meat." But it was the description of a third approach that really caught my at­tention. In Bruni's words, there is a third track to producing alter­native protein: "…fermentation-derived proteins made from microorganisms, like fungi, that can be coaxed in a meaty, cheesy, creamy or milky direction. This track is arguably the most exciting — in terms of affordability, versatility, environmental gentleness and untapped possibility. There are microbes out there just waiting to feed us." Fungal protein as a meat substitute? This was news to me, I had to dive in a little deeper. It did not take long to find information on one of these most exciting fungi and it was, surprisingly at first, a Fusarium.

From my limited familiarity with fungi, I knew that members of the genus Fusarium include many important plant pathogens. I recalled them as destroyers of our foods, not as sources of food. A quick search reinforced my prior beliefs, fusaria are repeatedly mentioned as agents of disease and producers of mycotoxins. Here is one example, the opening sentence of a paper establishing the molecular phylogeny of fusaria, " Fusarium species rank among the most economically de­structive plant pathogens and mycotoxigenic fungi, posing a threat to plant and animal health and food safety." Not the stuff I'd want to eat. But, as is often the case, the negative aspects of some microbes seem to attract the most attention. Turns out that examples of non-pathogenic and even plant-beneficial isolates of Fusarium abound, even for Fusarium oxysporum, notorious for causing large economic losses in agriculture. Perhaps we should not be too surprised if some time in the not-too-distant future we encounter a novel Fusarium as one of the main components on our dinner plate. 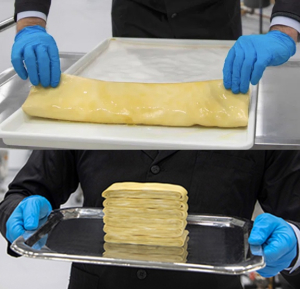 Front and center among the companies described in Bruni's article was "Nature's Fynd." Full disclosure: I have no rela­tionship with this company, I had not even heard of it be­fore reading the Bruni piece and I certainly have not tasted their products. I just found their story "very neat." As part of a NASA-funded project, researchers at the small start-up Sustainable Bioproducts and Montana State University iso­lated and characterized extremophiles from acidic hot springs in Yellowstone National Park. One of the fungal iso­lates they obtained they named Fusarium Yellowstonensis. Under some growth conditions this fungus yields a high protein-content ferment dubbed "Fy Protein," explaining the spelling of the company's name. More recently, the fungus was re-named Fusarium strain flavolapis (Latin flavo = yellow, lapis = stone). Clever, I like the new name better.

I searched the internet for this Fusarium and didn't find much by way of peer-reviewed publica­tions, only one paper appears in Pubmed. It indicates that a draft genome for the fungus has been determined and presents a bioinformatic analysis aimed at identifying the likelihood that some of its proteins are allergens. The authors conclude that Fusarium strain flavolapis (along with two edible microalgae) "do not represent a significant risk of food allergy to the general population…" Given that this was a strictly bioinformatic approach and that some of the authors are from the company, we'll just have to wait and see. Clearly, allergies to Fy Protein would be a big hurdle to its success as a meat alternative. In contrast to the scarcity of peer-reviewed publications, I found lots of coverage on the recent success of the company. Bottom line, in a very short time Nature's Fynd raised US$158 million and last month began selling dairy-free cream cheese and meatless break­fast patties. Fy Protein is certainly on a fast track, but the question remains as to its destination.

It turns out that the use of Fusarium strains for the production of high protein meat alternatives is not a new idea at all. More than fifty years ago scientists in the UK identified a strain of Fusarium venenatum and called its high protein fermentation product "mycoprotein" which has been sold under the trade name Quorn since 1985. The road has not been an easy one for mycoprotein, in part plagued by lawsuits claiming severe allergic reactions in some individuals. With that in the track record for Fusarium as a food source, I wonder what the future holds for Fy Protein. Still, there are some features about Fy Protein production that I find very appealing. Since it is an acidophilic fungus, it is easy to grow in large scale without major contamination problems. In contrast to typical bulk liquid fermentations, Fusarium strain flavolapis can be grown in large trays containing the acidic medium. It grows as a massive mat at the air-liquid interface (very thick pellicle) with a texture supposedly similar to muscle fiber. The mats can be easily rolled and then it is just a matter of steaming, pressing, rinsing and slicing. After that, Fy Protein can be left as is or powdered or even turned into a liquid. A great advantage: it is made indoors, requires precious little land area, and can be made very close to where it will be consumed. Thus, it has a miniscule transportation-related carbon footprint. Recently, Bill Gates – a supporter of Nature's Fynd – did a taste test of their "yogurt" with Anderson Cooper on 60 minutes. Which brings me to what I like the most about the main concepts behind such projects as Nature's Fynd (and there are plenty other to cheer on). As we face the coming crises that will accompany climate change, the idea of food production methods that utilize orders of magnitude fewer resources than current methods are always welcome. And given that a fungus is involved here, I'll continue to cheer for them from the sidelines. I doubt I will prefer Fy Protein over chanterelles, but I will be happy to be proven wrong.