« Fungomania II. A (not so) new face of Fusarium | Main | Of Terms in Biology: Alpha, Beta, Gamma Diversities »

Fungomania III. A Yeast Messes with the Gut Microbiome

This is the third post in this year's Fungomania series, see here and here for Fungomania I & II. The microbiome of the large intestine of mammals, main­ly composed of bacteria, is the subject of innumerable current studies. And for good reasons. Of all the body's microbiomes, it is the largest in numbers, variety, and of likely importance in health and disease. Defying expecta­tions, it is remarkably stable in its composition in an in­dividual, which opens up a formidable set of ecological questions (but it can be cherished from the point of view of our daily digestion). The gut microbiome does, never­theless, vary considerably between individuals.

In an attempt to find out what is going on in the dark, researchers from Tufts and Harvard (the senior author being Carol Kumamoto from my old department at Tufts), set out to shed light on it. Their experimental setup was to challenge mice with an antibacterial antibiotic, clindamycin, and study what difference colonization with the yeast Candida albicans made in the recovery of the ordinary microbiota. A good reason for using this yeast is that it is the most common of all fungi harbored in the human body and, in humans, is the most common fungal opportunistic pathogen (it is not common in mice). Interestingly, colo­ni­zation with C. albicans doee not much alter the com­position of the bacterial biota, although it changes what is called its co-occurrence network. However, the colonized mice did not bounce back from the antibiotic treatment with the same alacrity as their non-Candida infected cohorts. The authors call this property "ecological resis­tance." The result was that, via network analysis, post-antibiotic, C. albicans-colonized mice showed decreased modularity (a measure of network structure) and centrality (the importance of nodes in a graph). Thus, C. albicans colonization reduced the population's ecological resistance. 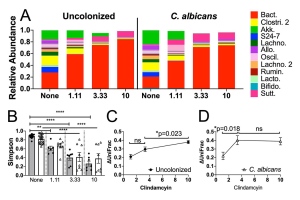 The authors conclude: "Based on our findings, we sug­gest as a model that the relationships between bacterial genera inferred by the co-occurrence network analysis contribute to the community's ecological resistance in response to clindamycin challenge and, further, that one effect of C. albicans colonization could be to alter the strength of these relationships. Therefore, structural changes in the microbiota network observed in C. albi­cans-colonized microbiota could result in the observed increase in sensitivity to disruption by clindamycin even though the compositions of the communities with and without C. albicans were very similar.

In conclusion, the response of the microbiota to clindamycin challenge was used here to measure ecological resistance of the community. The introduction of C. albicans into the community had only modest effects on the composition of the bacterial microbiota. However, the underlying mi­crobiota network structure was altered by colonization, and the C. albicans-containing community was more easily changed by clindamycin treatment. These studies provided insight into the micro­biota response to acute clindamycin challenge and the effect of C. albicans colonization on ecolo­gical resistance."

Legend to Figure 2. C. albicans colonization decreased ecological resistance of the bacterial microbiota. Mice were pretreated with cefoperazone in drinking water for 10 days and then either colonized with C. albicans (5×107 CFU by oral inoculation) or not. Mice were then switched back to sterile water, and the microbiota were allowed to recover for 3 weeks. They then received a single intraperitoneal (i.p.) injection of 1.11 mg/kg body weight, 3.33 mg/kg, or 10 mg/kg clindamycin. Fecal pellets were collected 1 day before and 1 day after clindamycin treatment for bacterial microbiota analysis by 16S rRNA sequencing and QIIME2. (A) Relative abundances of all bacterial genera detected with a median of >0 pre-clindamycin, before and after clinda­my­cin challenge, in the average uncolonized and C. albicans-colonized microbiota. The colored proportion of the bar represents the average proportion of the whole microbiota for each individual genus. The most abundant bacterial genera are shown in the legend at the right: Bact, Bacteroides; Clostr. 2, unclassified Clostridiales2; Akk, Akkermansia; S24-7, unclassified S24-7; Lachno, unclassified Lachnospiraceae; Allo, Allobaculum; Oscil, Oscillospira; Lachno. 2, unclassified Lachnospiraceae 2; Rumin, unclassified Ruminococcaceae; Lacto, Lacto­ba­cillus; Bifido, Bifidobacteria; Sutt, Sutterella. (B) Simpson indices before and after clindamycin challenge in uncolonized and C. albicans-colonized mice. Symbols indicate individual mouse microbiota, bars indicate the averages, and error bars indicate SEMs. Gray bars/● indicate uncolonized mice and open bars/△ C. albicans colonized. ANOVA followed by Sidak's post hoc test: **, < 0.01; ****, P< 0.0001. Average changes in weighted UniFrac position from starting position of the uncolonized microbiota (C) and the C. albicans-colonized micro­biota (D) as a consequence of clindamycin treatment, change in position calculated for each individual, and the average of experimental groups. Symbols indicate the averages and error bars indicate the SEMs. Welch's t test was used to compare experimental groups; except where noted, P < 0.05. Uncolonized (C): 1.11 mg/kg, N = 6; 3.33 mg/kg, N = 7; 10 mg/kg, N = 7. C. albicans-colonized (D): 1.11 mg/kg, N = 8; 3.33 mg/kg, N = 8; 10 mg/kg, N = 8.