Tom Brock (September 10, 1926 − April 4, 2021) can readily be considered the father of extremo­phile microbiology. He pioneered the study of high temperature-loving microbes, by investigating, in a nearly frolicsome way, the hot springs of Yellowstone Park. He carried out this work pretty much alone, with both experimental ingenuity and conceptual gusto, laying down the basis for a new way to appreciate the microbial world. He also wrote a trailblazing textbook, Biology of Micro­organisms (which other authors carried through 15 editions.)

His legacy certainly includes the insight, gained through painstaking experimental work, that mi­cro­organisms need to be studied in their natural environment in order to really get to know them. But rather than paraphrase, let's let him speak himself: 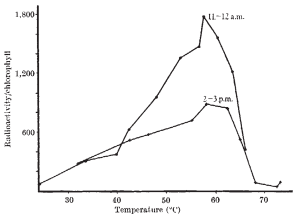 One of the most interesting things I discovered was that the thin film at the upper limit was not struggling to sur­vive, but was optimally adapted to that temperature. It functioned better here than at lower temperatures. I showed this by measuring photosynthesis with radioac­ti­ve carbon dioxide, doing what I called "temperature trans­fer" experiments, as will be explained below.

The results of this work were published in a short paper in 1967. (Brock, Micro‑organisms adapted to high tempera­tures. Nature: 214: 882-885.) This paper has been widely cited, but the broad implications for un­derstanding evolution have not been followed up.

"Of the micro-organisms which can grow at environmental extremes, one must distinguish be­tween those which are optimally adapted to the extremes and those which grow better in less ex­treme conditions. This is especially important because an extreme environment is usually re­cog­nized as one in which growth of the organism is slow. An experimental approach to this must per­mit the direct measurement of the environmental variable in the habitat in which the organism is growing and in which it has therefore evolved. It is essential to examine the organism directly in its natural environment rather than in cultures isolated from such habitats, because it is not pos­sible to be certain that the cultures are indeed representative of the natural material, and it is usually impossible to duplicate in the laboratory all aspects of the natural environment."