All the World Is Not E. coli

Like most people interested in bacterial physiology, I spent much of my life with the nearly reli­gious persuasion that the starting condition for studying growth is when cells and their constitu­ents all increase in unison. In practice, such "balanced growth" is achieved when bacteria grow ex­ponentially at low concentrations. Much was learned from this stance, especially when it came to understanding the mechanism of regulation of gene expression. One of the main points has been that synthesizing the principal sorts of macromolecules proceeds at the same individual rate re­gardless of the growth rate. You need to make more proteins? Bring up more ribosomes! See here for a review article. 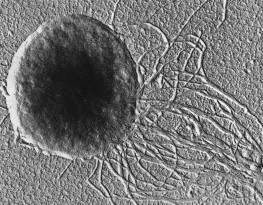 But a nagging question remained, what does this have to do with the real world? Outside the cozy confines of Sal­monella or E. co­li in the laboratory, microbes seldom find themselves under balanced growth conditions. Along with the understanding that microbes of our planet are much more abundant than classically thought came the realization that most of them are starving or nearly so. This obviously follows from the fact that the largest nat­ural environments, such as the oceans or the subsoils, are "thin soups" or, to use science talk, oligotrophic.

How can we study the physiology of such a huge variety of microbes that live under so many different conditions? Alas, we must pick and choose exam­ples, hoping that the choices are germane. One such newly reported study carries the title: "An alternative resource allocation strategy in the chemolithoau­totrophic archaeon. Methanococcus maripaludis." It is authored by investigators from Stanford and the Scripps Research Institute, the senior (last) author being Alfred Spormann. They conclud­ed that "In contrast to relying on gene regulation like metabolically versatile, heterotrophic model bacteria such as Escherichia coli, Methanococcus maripaludis responds to energy limitation by redistributing energy for cellular maintenance and changing catabolic and ribosomal activities."

What does this mean? In brief, it suggests that there is a grand alternative to the conventional be­lief. Whereas E. coli alters the amount of its ribosomes (its protein synthetic machinery) with the growth rate but keeps the activity of its ribosomes pretty constant, M. maripaludis simply changes its ribosome activity. These two contrasting tactics imply the existence of at least two different physiological strategies for coping with changing environments, one within the world of nutritional affluence, the other, under conditions of famine.

A word about Methanococcus maripaludis. It's a methanogenic, strictly anaerobic archaeon first described in 1983 from a salt-marsh sediment in South Carolina. Its species name means 'sea marsh.' It makes methane from carbon dioxide using hydrogen as the reducing agent. It has be­come a popular model species because it grows relatively fast and can be readily manipulated genetically. It is popular among astrobiologists because it can grow on "Mars Soil Simulant."

The authors of this paper carried out an exhaustive systems-level investigation of the physiology of this or­ganism growing over a wide range of rates of energy li­mitation. Using a chemostat, they grew their cultures at rates 1 to 39% of the maximum (which is a doubling time of 2 to 3 hours). Unlike E. coli, the proteome did not change appreciably with the growth rate, neither did the cell content of DNA and RNA, nor did the size of the cells. Ribosomal RNA constituted a constant fraction of all RNA and, again unlike what happens in the world of E.coli, it did not diminish upon amino acid starvation (no strin­gent response). Contrariwise, the fraction of ribosome in polysomes decreased at slower growth rates, suggesting that the efficiency of the working ribosomes decreased under these conditions, which is not how E. coli regulates its biosynthetic business. They also estimated the extent of maintenance energy, the amount of substrate used for the upkeep of cell functions and found that it was higher at high growth rates. 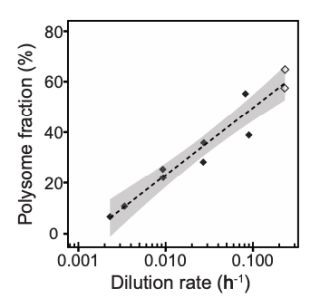 What does all this mean? It suggests that in the microbial world there are two very different strategies for coping with different nutritional conditions in the environment. In one, the "E. coli variety," the growth rates dictates the size of the biosynthetic machinery but keeps its activities constant. In the other, the M. maripaludis one, the bio­synthetic machinery remains constant, but its activities vary. As the authors say: ”The M. maripaludis strategy does not require complex regulatory features that are commonly found in microbes selected for competition for fast growth (link)." This strategy has been found in some other methanogenic archaea. The authors spe­culate that, among other things, this tactic may allow for faster resumption of growth when food becomes again available. This may indeed be characteristic of organisms adapted to compete with others in nutritionally fallow environments.

A word about two of us STC bloggers. This subject is near the hearts of both Roberto and Elio. Ro­berto was one of the first to investigate what happens when E. coli enters the stationary phase of growth, Elio, studied the dependence of macromolecular synthesis and cell division on the growth rate. We are both happy to learn of a grand alternative.