From bacteria on up, all the way to the cells of our bodies, most cells divide by binary fission. That is, the process initiates at midcell, usually by constriction, and proceeds until the two resul­tant daughter cells become separated. Most often, these two sister cells are identical in size and shape. Boring. Enter Bacillus subtilis (and other Gram positive sporeformers) and things liven up. Although these organisms follow the conventional path when dividing vegetatively, that is, grow­ing unhindered, they go a separate way when making spores. Exciting. 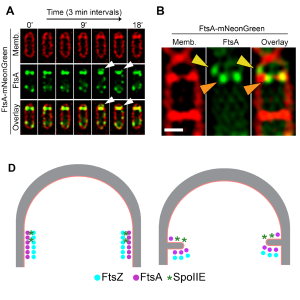 (Click for the full fgure)
Role of SpoIIE in modulating FtsAZ fila­ment localization. A Time-lapse fluores­cent microscopy of a dividing sporangia with FtsA in green and membranes in red. Images are taken every 3 minutes. Between 12 and 15 minutes, two FtsA rings are visible, one that constricts and the other that seemingly stays behind at the forespore side of the septum. White arrows indicate FtsA on the forespore side that does not constrict. B Struc­tur­ed-illumination microscopy of a dividing sporangia with FtsA in green and mem­bran­es in red. The two puncta (dots) corresponding to FtsA are more clearly visible, one that constricts (orange) and the other that remains on the forespore side (yellow arrow). C Line graph showing the normalized intensity of the membra­ne (red) and FtsA-mNeonGreen (green) signal along the normalized length of the cell. Two peaks corresponding to two punc­ta of FtsA in B are indicated by oran­ge and yellow arrows respectively. D A pos­sible model of how SpoIIE (green as­teri­sks) affects the localization of FtsA (pink) and FtsZ (blue) filaments during spo­ru­lation (top view of the cell). PG (grey) and cell membrane (peach) are al­so highlighted. IIE molecules are prefer­entially present on the forespore side and hence bind to FtsZ on the forespore side (brown asterisks). This may prevent binding of FtsA filaments (and likely other cell division proteins) to FtsZ on the fore­spore side and they stay behind at the forespore edge, while FtsAZ filaments on the mother cell side constrict. Scale bar for (A,B): 1 µm. Source

Spore formation in bacteria is an elaborate matter. It in­volves making a division septum at a precise spot away from the cell center, near one of the poles. Don't ask how B. subtilis figures out where this spot is – nobody knows. But the result is an asymmetric division, resulting in a lar­ger cell called the mother cell, and a smaller one, the fore­spore, which will eventually become a spore. All this or­chestration is masterminded by a series of regulatory genes that kick in at precise times. The question arises, are the two septa (in vegetative growth and during spore forma­tion) the same? If you guessed that they are different, you would be right. The subsequent events in sporulation are just as fascinating. In time, the mother cell engulfs the forespore, a phagocytosis-like process that is otherwise nearly unknown in the prokaryotic world. This allows the spore to mature (and drop the "fore" moniker) and be re­leased when the mother cell lyses.

A study from the labs of Elizabeth Villa and Kit Pogliano at the University of California at San Diego sheds new light on details of the formation of the two septa. But first, some details about bacterial cell division in general. In most bac­teria, it starts when a somewhat magical protein called FtsZ polymerizes into a peripheral ring, the FtsZ-ring, at the di­vision site. The ring constricts progressively until the cell divides. FtsZ is a tubulin homolog, the first such to have been found in bacteria. It serves as a scaffold for about a dozen other proteins that form a division machinery called the "divisome." In B. subtilis, one such protein, an actin ho­molog called FtsA, sticks FtsZ to the cell membrane, making the so called FtsAZ filaments.

The septa in vegetative and sporulating cells differ in va­rious ways besides their cellular position, the former being about four times thicker than the latter. For convenience, we will refer to the two as the "vegetative septum" and the "sporulation septum." Involved in making the sporulation septum is a sporulation-specific protein called SpoIIE *) that is localized on the forespore side of the septum. "Treadmil­ling" along this septum, that is, growing at the head and losing material at the tail of the FtsZ fi­lament, allows the circumferential motion of enzymes to carry out the synthesis of the main cell wall polymer, peptidoglycan (PG). The work in this preprint reveals that the FtsAZ fi­laments are only present on the mother side of the sporulation septum, which, for all we know, may well ex­plain why it is thinner. SpoIIE regulates both the location of the divisome and the thickness of the sporulation septum. (Click for the full figure)
Identity of cytoskeletal filaments and the­ir localization during sporulation. A Box-plot showing the distance of the mem­bra­ne-proximal and the membrane-distal rings from the cell membrane in wild ty­pe and FtsZ-linkerQ-rich strains. B Sche­ma­tic highlighting the arrangement and the identity of the cytoskeletal machinery with PG (grey), cell membrane (peach), FtsZ (blue) and FtsA (pink) highlighted. In the top view (xy coordinate plane), the cy­toskeletal machinery is visible as two se­ries of dots at the nascent septum. In the rotated view (xz coordinate plane), den­ser and more continuous Z-ring is teth­ered to the membrane via a patchy ring formed by FtsA filaments. C Slice through a tomogram of a dividing sporulating cell. D Left panel, zoomed-in view of the 'l ' in­set in (C) in the xy coordinate plane. Right panel, same as left with cell membrane (peach), FtsA bun­dle (pink) and FtsZ bundle (blue) highlighted. PG, forespore and mother cell compartments are also in­dicated. E Left panel, view of the septal disc corresponding to (D) in the yz co­ordinate plane obtained by rotating the cell around its long axis near the left side of the invaginating septum by 90°. Right panel, same as left with cellular parts and FtsAZ filaments highlighted. (F) Schematic of the arrangement of cytoskeletal ma­chi­ne­ry during sporulation. G,H Bar gra­phs depicting (G) septal thickness and (H) distance spanned by FtsZ bundle in wild type vegetative and sporulating cells. Sca­le bar C: 200 nm, for D,E: 25 nm. Source

This work relied on cryo-electron tomography carried out with a special twist called FIB, which Kanika Khanna, first author of the present study, had explained in a recent STC post. Briefly, because B. subtilis is too thick for cryo-ET, it must be first scraped into thin slices using a process called cryo-focused ion beam milling (FIB). Such "milled" sections can now be con­veniently studied via cryotomography.

Using these techniques to visualize both the vegetative and the sporulating septa, the authors added detailed know­ledge to our understanding of these processes. Thus, they found that in vegetative cells the FtsA filaments are located near the cell membrane, the FtsZ ones, away from it. Also, they found interesting differences in the architecture of Gram negative bacteria such as E. coli and Gram positive ones, such as B. subtilis, some of which are explainable by the thicker peptidoglycan layer in the cell walls of the latter.

Why is the sporulation septum thinner than the vegetative one? The authors propose that, among other things, this may facilitate the engulfment process of the forespore by the mother cell. The article carries an impressive amount of data dealing with other details of the formation of both ve­getative and sporulation septa.

The authors end their paper by stating: "Our data provide a significant advancement in the understanding of the organi­zation of the divisome, its regulators and its role in septal PG synthesis in Bacillus subtilis, providing, to the best of our knowledge, the first evidence for the asymmetric assembly of the divisome in bacteria, and showing that this depends on the SpoIIE protein that is required for the onset of cell specific gene expression. Future efforts to identify the mole­cular arrangement of FtsZ and its regulators inside the cell such as SpoIIE, will aid in development of new antimicrobi­als targeting the cell division machinery in important patho­gens."

*) SpoIIE is a phophatase active in the pre-spore compartment of B. subtilis during septum formation, and should not to be confused with the DNA translocase SpoIIIE.