« Prokaryotic Organelles. Yes, There Are Such Things. | Main | Color is in the Eye of the Bacteria-Beholder »

Quick, without much thinking, what image came to mind when you read "biological pump" in to­day's title? If you are like me, predisposed to think in cellular and molecular terms, you might have thought of an integral membrane protein that pumps molecules into or out the cell. Perhaps any of one of the many proteins that pump protons out of the cell to generate a proton motive force. Or, maybe one of the efflux pumps responsible for troublesome antibiotic resistant phenotypes. In either case I'll say: wrong. Those are indeed fascinating biological pumps, but they are not the biological pump. Think bigger. Think really big, like planetary big. 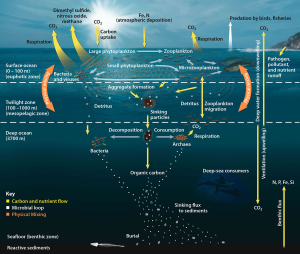 (Click to enlarge)
Figure 1. The pelagic food web, showing the cen­tral involvement of marine mi­croorganisms in how the ocean imports carbon and then ex­ports it back to the atmosphere or to long lasting burial in the ocean floor. Source. Fron­tispiece: Hand-operated water pump. Source

The biological pump is, briefly put, the sum of the complex biologically driven processes that capture carbon from the atmosphere and pump it into the oceans' interior and the seafloor. As it turns out, the biological pump is a major contributor to overall carbon cycle of the planet. The esti­mates are that more than 10 gigatons of carbon are thus pumped into the ocean every year. Without the biological pump carbon dioxide levels in the atmosphere would be twice the levels that they are today. Not surprisingly, most of the biological aspects of this pump are microbiological. Sequestration starts with carbon dioxide fixation by pho­tosynthetic microbes in the euphotic zone, the first 100 or so meters of the water column. These primary producers are then eaten or destroyed by predators large (zooplank­ton) and small (bacteria and viruses). The majority of the carbon actually returns to the atmosphere through com­­plex food webs, mostly due to respiration. But some car­bon gets pumped to greater depths as particulate organic carbon (POC) which sinks through the column to the bottom of the ocean, the benthic zone. While only an estimated 1% of the POC generated in the euphotic zone eventually makes it to the bot­tom, it can remain sequestered there for millions of years. This description is, of course, an extre­me over­simplification. Very much a "black box" account of how an extremely complex yet critically important ecosystem functions. A lot of the details of how the biological pump works are now known, and I'll be exploring some of those in future posts. But for now, just marvel at the magni­tude of the biological pump and recognize that microbes are foundational to its function.