« All the World Is Not E. coli | Main | Prokaryotic Organelles. Yes, There Are Such Things. »

Streptomyces stacks Z-rings... into ladders inside its aer­ial/sporogenic hyphae. If this sentence strikes you as a barrage of jargon or just gibberish, don't despair, help is coming. First, enjoy the "light show" in the 20‑second video clip on the right side. It runs in loop, so you can follow more than just one growing hypha, and see what happens in them over time (Figure 1). Click on the picture to see an enlarged version in a separate window.

Now taking apart the first sentence: on Petri dishes, Ac­tinobacteria of the genus Streptomyces grow as long rod-like hyphae (filaments) with infrequent septa and occa­sional branches that reach into the substrate and pro­trude into the air (see Figure 2). The aerial or sporogenic hyphae differentiate into chains of spores, which break-off when mature (maybe they are taken on a ride by passing Bacillus subtilis, as described here in STC, who knows.) The differentiation process involves the action of FtsZ, the cytoskeletal protein that forms constricting rings attached to the cytosolic side of the membrane and dri­ves cell septation and division. The video clip is part of a recent study by Susan Schlimpert's lab at the John Innes Centre, Norwich, UK. "Starring" in the video clip is Streptomyces venezuelae, which unlike most other Streptomyces species sporulates submersed in liquid media, and Susan provided a few more details in an email: "The movie covers a period of ~11 hours (1 frame/10 min). We usually cut out the first 6–8 h of the lifecycle and only start imaging around the time when we expect sporu­­lation to happen. We grow Streptomyces venezuelae (or Sven called in the lab) in a com­mercial microfluidics system which allows us to flush-in "spent medium" (medium from a sporu­lating culture). This stimulates sporulation. One spore-to-spore lifecycle takes about 24h." It is far from trivial to "tag" a protein capable of oligo­merization with a yellow fluorescent protein (YFP) without affecting its intracellular localization and functionality, but it worked in this case without the cells needing another "untagged" gene copy. Susan wrote in an earlier methods paper: "In sporulating hyphae, the localization pattern of FtsZ-YPet changes dramatically; first helical FtsZ-YPet filaments tumble along the hypha and then, in a sudden, almost synchronous event, these helices coalesce into a ladder of regularly spaced FtsZ-YPet rings. Under the experimental con­ditions described here, these evenly distributed FtsZ-YPet ladders persist for approximately 2 hr. Finally, sporulation septa become discernible in the differential interference contrast (DIC) ima­ges... and eventually new spores are released." 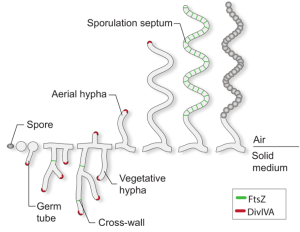 Figure 2. Streptomyces life-cycle on solid media. The cellular development of a spore begins with the formation of one or two germ tubes, which grow by tip extension to form a network of branch­ing hyphae. Polar growth and branching of the vegetative hyphae is directed by DivIVA (red). The formation of vegetative cross-walls re­­quires FtsZ (green). In res­ponse to nutrient li­mi­tations and other signals, aerial hyphae are erect­ed. Arrest of aerial growth is tightly co­or­dinated with the assembly of a ladder of FtsZ-rings, which give rise to the sporulation septa that compartmentalize the sporo­genic hyphae in­to box-like prespore com­partments. These com­partments assem­ble a thick spore wall and are eventually released as mature pigmented spores. Source

It was actually not the aim of Ramos-León et al. to obtain the longest and most beautiful Z-ring ladders but rather to use them as assay system to get clues about the func­tion of a protein, SepH, that is (so far) only found in Acti­no­bac­teria. Indeed, they found that a S. venezuelae ΔsepH mutant shows aberrant Z-ring placement in the sporo­ge­nic hyphae, and the resulting spores are highly irregular in size. SepH binds FtsZ and stimulates the assembly of FtsZ protofilaments in vitro. It appears that SepH promotes the bundling of FtsZ protofilaments in the correct inter-filament distances to achieve Z-ring condensation in vivo, indicating a Z-ring stabilizing function as is known for the FtsZ-binding proteins (ZBPs) EzrA, SepF and ZapA in B. subtilis.

This is not the first time we feature a short video clip in our "Pictures Considered" series (#15 was the first), and we'll be sure to do so more often in the future. Not be­­­cause it is now technically possible − and entertaining − but be­cause 'motion pictures' capture the inherent dy­na­mics of biological processes in a way that is superior to still photographs for their understanding, "telling" as you may call it. This is an ever‑so‑slight contradiction to Elio's statement "One picture is all it took," when he celebrated "The Birth of the FtsZ Ring" in Pictures Considered #5. However, in 1991 when Erfei Bi & Joe Lut­kenkaus presented the first images of FtsZ rings, observ­ing and filming proteins in living bacterial cells was still in its infancy. To my knowledge, the time-lapse series of oscillating GFP-tagged MinD protein in E. coli, shown by Piet de Boer during a work­shop I attended in 1997, were "a first."