Prokaryotic Organelles. Yes, There Are Such Things. 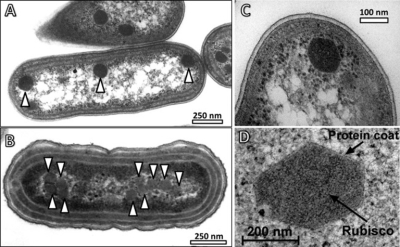 (Click to enlarge)
Figure 1. Carboxysomes and their sub­cel­lular con­text (arrowheads in panels A and B indicate the positions of carboxy­som­es). A β-Carb­oxysomes present in Syn­echo­coccus elongatus. B α-Carboxy­som­es present in Cyanobium. (Courtesy of Lynne Whitehead.) C Close-up of a β-car­b­oxysome from S. elongatus. D Close-up of a β-car­boxysome from Anabaena va­ri­abilis M3. Source

One of the venerable distinctions between eukaryotes and pro­­kary­otes used to be that prokary­otes do not have organelles. This distinction has now gone by the wayside because bacteria and archaea have been shown to possess protein bound structures that can ap­pro­priately be called organelles. They go by other names as well, such as microcompartments, nanocompartments, encapsulins, etc. Call them what you wish, they are all a way to com­partmentalize enzymes that may not work well free in the cytoplasm or a strategy to keep toxic compounds in isolation. True, they may seem to be rather unpretentious protein bags that do not suggest a symbiotic origin as seen in mitochondria or chloroplasts. So far none have been shown to carry DNA.

Prokaryotic microcompartments and their ilk are involved in a great variety of microbial ac­tivities, from photosynthe­sis to certain diseases. So important are these structures to our understanding of microbial metabolism that we need to review our long-held beliefs of how the microbial cyto­plasm works.

Among the first discovered and best studied prokaryotic organelles are the carboxysomes, structures that store RuBisCO, the enzyme that carries out carbon dioxide fixa­tion during photosynthesis. They further help it out by in­creasing the local CO2 concentration using what is called a CO2-concentrating mechanism (CCM). Carboxysomes en­capsulate the enzyme carbonic anhydrase that supplies CO2 from a cytoplasmic pool of bi­carbonate. Not only that, carboxysomes sequester toxic aldehyde intermediates and thus remove them from the cytoplasm. Carboxysomes and their CCMs are found in the cyano­bacteria, the dominant photosynthetic microbes, and in some proteobacteria. The proteins of the shells are not all identical – they come in several evolutionarily distinct forms. 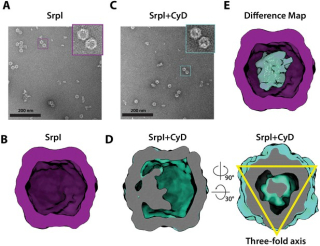 Figure 2. A Negative stain micrograph of an apo-SrpI shell in contrast with (C) the holo-SrpI shell that includes the CyD cargo. B and D 3D reconstruction of apo-Srpl and holo-SrpI, re­spectively. E Dif­ference map showing additional density for the holo-SrpI with a homologous cysteine desulfurase dimer docked in (pdb: 6c9e). Source

Carboxysomes present an opportunity for possibly spectacular improvements in crop pro­duction. Imagine cloning the CCM from cyanobacteria into plant chloroplasts. This might well increase the level of photosynthesis of such crops and augment their production to a signi­fi­cant extent. This kind of bioengineering is not easy, but it's being attempted in several labo­ratories, e.g. here, here, and here.

Prokaryotic organelles are not limited to the carboxysomes, far from it. There is an abundance of them, found in at least 19 bacterial phyla. An older example of a bacterial organelle is one involv­ed in propane-diol metabolism. It sequesters a toxic aldehyde intermediate and make it suscept­ible to de­gradation. More recent is the discovery of a class of even smaller compart­ments called encapsulins, which are simp­ler than the previously known microcompartments. Typi­cally, they consist of just two proteins, one that self-assem­bles into an icosahedral shell not unlike a viral capsid, and a cargo protein that is often multifunctional. Interestingly, cargo proteins have a pep­tide sequence that dictates their encapsulation. The cargo proteins that are so encapsulated are quite diverse. They include some involv­ed in iron mine­ralization, peroxidation, and tolerance to starvation and to certain stresses. As pointed out here, a recurring theme is the encapsulation of components of redox reactions. 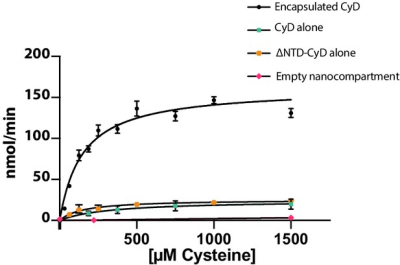 A recent paper from nine American and Canadian laboratories (with D. F. Savage as the last au­thor) describes a new family of such nanocompartments. It was found in the cyanobac­ter­ium Synechococcus elongatus and is involved in sulfur metabolism. This structure is up­regulated du­ring sulfate starvation. Its sole cargo the enzyme cysteine desulfurase, which removes the sulfur from cysteine to convert it into alanine. The authors further identify a terminal sequence in this cargo protein that is necessary and sufficient for the compart­mentalization.

A detailed study of this encapsulin revealed structural features that are seen by cryo-elec­tronmicroscopy. In­terestingly, The shell protein shares features with the capsid protein of phages of the very populous order tailed phages, the Caudovirales, which suggests a pos­sible common ancestry. Lastly, homologs of the shell protein  are found in various myco­bacteria, including human and avian pathogens.

The authors conclude: "Our identification of SrpI  (the shell protein) and its homologs as members of an evo­lutionarily distinct encapsulin family may provide further insights into the divergence and origin of prokaryotic na­nocompartments. Already, the breadth and diversity of known encapsulin systems is vast, yet it is likely that more await discovery."