The Riddle of Life

Book Review: How Molecular Forces and Rotating Planets Create Life: The Emergence and Evolution of Prokaryotic Cells by Jan Spitzer

Small Things Considered aficionados with a durable memory may recall an excellent post written by physical chemist/chemical engineer Jan Spitzer in 2013 in response to an even older Talmudic Question #67 posed by Elio. Spitzer's post was subsequently chosen to be part of In the Company of Microbes, the ten-year anniversary collection of Small Things Considered from ASM Press. In it, Spitzer explains his wish to look in cells (if possible, with an imaginary microscope) at dimensions of 10 to 100 nm over millisecond durations, to find out how transient macromolecular clusters exist as discrete, cellular objects. Furthermore, Spitzer writes about the difficulties that go along with such a paradigm that reduces biology to a simple medley of chemistry. He sums this up metaphorically as "The Humpty-Dumpty Problem," saying:

"The chemistry of the lipids, proteins, and particularly the nucleic acids (the genetic code) is the 'same' for all living things; unique living systems are each a variation on the same chemical theme composed from relatively few chemicals—the 'building blocks of life'… There can be little doubt that […] synthetic biomacromolecular products will have the same properties (chemical and biological) as those synthesized enzymatically by cells. However, it is when the molecules and macromolecules come together in a dynamic environment that the 'living state' of matter is born. Because we do not yet know how the 'living state' of matter comes about, we are astonished at seeing bacterial cells 'do what they do'—growing and dividing at an incredible speed…" 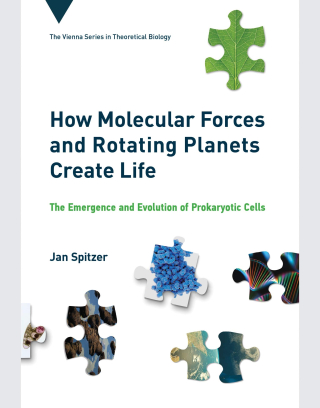 If all cellular processes can be distilled down to chemistry, what makes them different from the same processes as occurring in non-life? Where is the line defining life? One's answer might be that the distinction lies in the containment of these processes in an enclosed environment that uses the chemistry for self-replication of this environment, i.e. cellular reproduction. But, how could such a replicating system of contained chemical reactions first evolve to set itself apart from the chemistry around it?

In How Molecular Forces and Rotating Planets Create Life (Figure 1), Spitzer sets out to address such foundational questions surrounding the riddle of life and its emergence. The eight chapters introduce, refine, and expand on numerous theoretical biology papers and reviews published by Spitzer over the past two decades. He builds his physiochemical perspective of the cell and the nature of its evolution from the long history of origins research and models put forward by the likes of Francis Crick, Franklin Harold, Linus Pauling, Harold Urey, and Carl Woese. (Harold being one who has also written for us in the past, e.g. on structural inheritance; he also authored a memoir that I previously reviewed here.)

As the title to the book implies, Spitzer's argument for models of life's origins involves the convergence of two foundational influences. Firstly, the non-covalent molecular forces of biochemistry that arise from the physics of atomic structures and interactions – inside the cell or out. This is the reductionist paradigm Spitzer alludes to in his previous post, what he refers to as the "Pauling-Delbrück premise" set forth in their 1940 Science article “The nature of the intermolecular forces operative in biological processes.”

Breaking a cell down into pieces of electrostatic interactions, hydrogen bonds, and hydrophobic van der Waals forces of attraction and repulsion is what I've just spent my entire semester trying to do while teaching Biochemistry. But students struggle to see all those little pieces of shell and imagine how they then form something greater than the sum of their parts: our ovate Mr. Humpty-Dumpty, the cell. As we've stated, origins researchers have struggled to address this too. Enter the second aspect to Spitzer's argument then, an expansion of the Pauling-Delbrück premise to add "Rotating Planets."

According to Spitzer, the rotation of the Earth, and in particular the unique conditions of our planet brought on by the formation/existence of our moon, put in place the precisely right environment for the gradual evolution of cells from pre-biotic chemistry. Specifically, planetary rotation and lunar forces gave rise to a specific cyclical pattern to physiochemical conditions coinciding with Earth's cooling. This put into place patterns in reactions and molecular interactions that manifested to include cyclical phase separations that could ultimately evolve into replicating systems, cells.

Approaching the Riddle and its Complexity

Spitzer reiterates and summarizes his arguments at numerous points throughout the story of his book. Hearing some things more than once sometimes becomes very important when tackling a complex issue of something ironically so simple to state: how did life emerge? Fittingly, this parallels the argument that the stoking of life from non-biotic chemistry may have required regular (cyclic) fluctuations of molecules between states and interactions/repulsions.

Spitzer thus structures the book with this in mind for his story. After a note, preface, and acknowledgements explaining how this book came to be, he outlines the entirety of his points for the rest of the book in an introduction titled "A Physiochemical Framework for Origins Research." Reading this introduction at the start is fine, but I wouldn't be worried if not everything makes sense yet, if terms or concepts confuse. It's an overview to introduce the reader to things; every point will be taken up again in more detail and deeper explanation.

On the other hand, starting in with the actual chapters may be more beneficial for some, particularly those unfamiliar with chemical engineering and Spitzer's related specialties. Chapters 1 – 3 likely offer a more welcoming and easier transition for microbiologists. The first two tackle the definition of life and the history of origins research, with emphasis of what the field still lacks. In the third chapter Spitzer summarizes advances in understanding what prokaryotic cells are, and the remarkable structural organization they hold that went previously underappreciated.

Chapters 4 – 7 represent the real heart of Spitzer's book and offer the fullest explanations of his arguments and unique perspectives. In chapters 4 and 5 he applies colloidal models of phase separation to examples of non-covalent interactions in bacteria and their subsequent manifestation to produce cellular machinery or architecture. Chapters 6 and 7 then present a list of steps Spitzer envisions that Earth's development and rotation could provide to chemical interactions to give rise to cells and now continue within them.

While I find Spitzer's arguments reasonable, logical, and fascinating, there are a couple of elements to his story (or his wording of it) that I found problematic from the biology perspective. First, Spitzer gives frequent and heavy weight to correlations between cyclical planetary processes and the evolution of biological processes like DNA replication. Seems a legitimate point to me, but Spitzer particularly brings up the cyclic nature of PCR as evidence of how important this is. It's a nice illustrative example, but an artificial one of in vitro temperature cycles that doesn't really follow through to what occurs in cells.

The second issue for me is the use of the word 'evolution.' Sometimes Spitzer uses it in the biological sense, sometimes in the generic. But, to end chapter 7 he includes a brief section entitled "Is evolution directional toward increasing complexity?" starting it with the statement that:

“There is little doubt that over the last 3.5 billion years, biological evolution has progressed toward more and more complex cells and multicellular organisms – toward greater biological complexity, or Darwin's 'endless forms most beautiful,' as if by intentional design.”

I worry about how that last bit could be misapplied by some. But, also one of the foundational concepts of intro biology is that evolution is NOT directional and does not progress toward greater complexity. These minor criticisms aside, arising when he steps outside of the molecular biology or biochemical realms, Spitzer does a remarkable job at articulating his model in a persuasive way that will connect with a biologist.

In the final chapter of the book, Spitzer returns to the field of origins research to propose "An Unexplored Experimental Paradigm of Cyclic Processes" with ideas of where experiments could go from here to incorporate aspects of his refined model built on Pauling-Delbrück's. He then ends with a summary that repeats his thesis in a succinct fashion. After reading the details at least twice prior, it serves to really reinforce the take-home messages of the book.

If you continue to wonder at the riddle of life, you might find How Molecular Forces and Rotating Planets Create Life just as fascinating as I did.