Fig. 1. Myxozoan parasite phylogenetic relationships. Phylogenetic tree showing relative position of Myxozoa within Phylum Cnidaria and its relationship to Bilateria, based on raw data from Chang et al. 2015. The closest non-myxozoan cnidarian relative is a parasite of sturgeon eggs, Polypodium hydriforme, which also has a free-living phase. Source.

When queried about the largest animals (a.k.a. metazoans) on Earth, I venture to guess that most readers will point to the blue whales, those magnificent marine mammals that can reach lengths of up to 30 meters and weigh upwards of 200 metric tons. Blue whales are indeed the largest animals known to have roamed this planet. But which are the smallest animals on Earth? We might point to the tardigrades, those microscopically cuddly water bears, which we discussed previously in posts by Christoph and Elio. Or perhaps the cheese mites, wonderfully explained by Scott Chimileski in an ASM post from 2016. But at sizes of about 0.1 millimeters, these animals are relative giants when compared to the smallest members of kingdom Animalia, the myxozoans. Some of these creatures never exceed 10 microns and have about 10 cells. Who are these tiniest of animals?

Myxozoans are members of the animal phylum Cnidaria that includes the much larger corals, anemones, and jelly fish, among others. The route to their classification as animals was not straightforward. Their small size led some to consider them "multicellular protists" while others used the presence of cnidocyst-like polar capsules as an argument to class them as relatives of the Cnidaria. The debate went on for nearly two centuries until the advent of genomics. The finding that myxozoans have and express cnidarian-specific minicollagen genes led to the current acceptance that they are animals. But very much reduced in their size and having very small genomes. 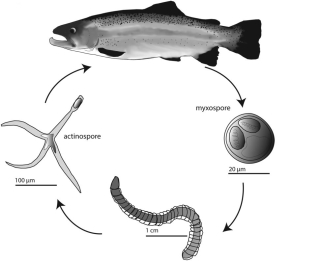 Fig. 2. Life cycle of the myxozoan Myxobolus cerebralis, the causative agent for whirling disease in rainbow trout. M. cerebralis alternates its development between a fish (salmonid) host and an annelid (Tubifex tubifex) host. The myxospore (Right) is produced in the fish and the actinospore (Left) is produced in the annelid. Both stages consist of just a few cells, including those housing polar capsules. Source.

Small as they are, myxozoans have a fascinating if somewhat bizarre life cycle. They are obligate parasites that alternate between two very different hosts. Most of the more than 2000 known species of myxozoans alternate between a fish host and an annelid host. Oftentimes these parasites do not cause major damage to their hosts, although they can cause important economic losses in aquaculture. The myxozoan Myxolobus cerebralis is a pathogen of rainbow trout. When the annelid host, the "sludge worm" Tubifex tubifex, carries M. cerebralis it releases infective so-called actinospores of the myxozoan that have an anchor-like structure. This unusual structure allows the actinospore to attach to the fish. Once attached, they inject their sporoplasm into the host's tissue. Within the fish muscle, M. cerebralis develops a completely different morphology called the myxospore. The myxospores are released and can be ingested by the annelid host where they once again develop into actinospores, completing the life cycle. (For those readers who know the word myxospore in the context of Myxobacteria, sorry about the possible confusion given the two vastly different meanings of same the word.) The confirmation that myxozoans were Cnidarians was not the only important insight obtained from genomic analyses of these animals. As more genomes were assembled, one particular species revealed a completely unexpected surprise that shook the animal world. A paper that involved several labs, with lead authors Dayana Yahalomi and Stephen Atkinson and senior author Dorothée Huchon from Tel Aviv University, presented the sequence of the humble salmon myxozoan parasite Henneguya salminicola. By most criteria the genome proved to be similar those of other myxozoans. But there was a glaring exception. This animal contains no mitochondrial DNA. In addition, the nuclear genome lacks the genes whose products carry out aerobic respiration and mediate mitochondrial DNA replication. Through the course of evolution into a small sized obligate parasite, H. salminicola lost a trait that had previously been considered a sine qua non for animals, aerobic respiration. This is the first sequence-based description of an anaerobic animal! The loss of aerobic respiration is a trait of many single-celled eukaryotes (protozoans) that are adapted to living in low-oxygen environments. In those cases, the standard mitochondrial aerobic respiratory pathway is replaced with anaerobic metabolic mechanisms that are housed in mitochondria-related organelles (MROs). In some cases, these MROs mediate ATP formation from pyruvate with the consequent formation of hydrogen. For this reason, these MROs are called hydrogenosomes. Consistent with the concept that H. salminicola is an anaerobic animal, microscopy analyses of its cells revealed DNA-less MROs. However, the mechanism of how this animal produces ATP remains unknown. 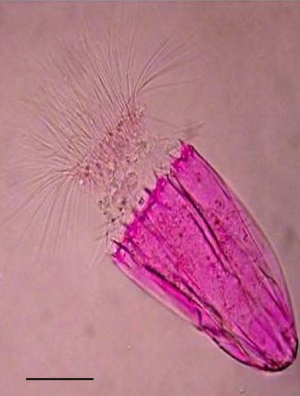 Interestingly, the environment within salmon muscle or inside an annelid is not necessarily strictly anoxic. Which makes one wonder why an anaerobic animal would flourish there. Particularly because so many of the other myxozoan fish parasites are aerobes. This prompts the question, might there be a whole universe of anaerobic animals living in strictly anoxic environments? Most likely so, and Elio described that possibility in a post from 2010. Turns that about twenty years ago Roberto Danovaro (Stazione Zoologica Anton Dohrn, Naples, Italy) and colleagues set out to determine if there were any metazoans living in the sediments of the deep anoxic hypersaline L'Atalante basin of the Mediterranean Sea. In 2010 they reported that those sediments were inhabited by at least three species of the animal phylum Loricifera (another group of small animals, though not quite as tiny as H. salminicola). In their words, here is what they concluded: "This is the first evidence of a metazoan life cycle that is spent entirely in permanently anoxic sediments. Our findings allow us also to conclude that these metazoans live under anoxic conditions through an obligate anaerobic metabolism that is similar to that demonstrated so far only for unicellular eukaryotes. The discovery of these life forms opens new perspectives for the study of metazoan life in habitats lacking molecular oxygen." Because these studies were based solely on microscopy, some argued that it was impossible to determine if these metazoans were really living there or simply cadavers that sank onto the sediments. The more recent discovery of an anerobic animal, based on sequence analyses, now lends much more credence to these earlier observations. It now appears very likely that there indeed exist many and diverse small anaerobic animals just waiting to be discovered. Yet another exciting aspect of the small things to be considered.