Amidst a global surge and focus on COVID-19 infections, other diseases that have had and will con­tinue to have impact on human health cannot be forgotten. Dengue, for example, continues to be a major mosquito-borne viral infection, impacting more than 100 million people per year. Den­gue can inflict joint pain, rash, and fever leading to severe illness with no specific treatment. In the absence of an effective vaccine and mos­quitoes developing resistance to insecticides, the disease calls for an alternative solution with a long-lasting impact. A non-profit research con­sortium called World Mosquito Program (WMP) last month reported a dramatic drop in Dengue cases and relat­ed hospitalizations in Yogyakarta, Indonesia via the deployment of mosquitoes carrying a bacterial symbiont called Wolbachia, proving the efficacy of this biocontrol system to improve human health. 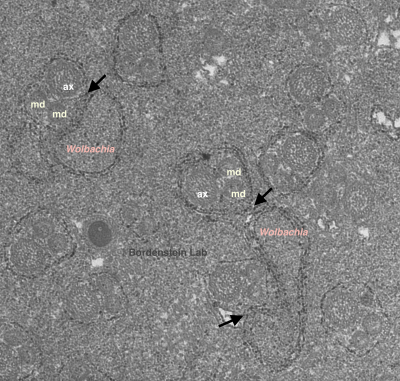 Wolbachia are Gram-negative, maternally-transmitted sym­biotic bacteria that inhabit a wide variety of hosts including insects, spiders, mites, and terrestrial isopods, as well as fi­larial and plant nematodes. It was in the early 1920s that graduate student Marshall Hertig, along with his PhD men­tor Dr. Simeon Burt Wolbach (Harvard University, Cam­bridge, Massachusetts), first described a bacterium, later named Wolbachia, in the gonads of various insects (Figure 1). Thirty years later, Hannes Laven (Johannes Gutenberg University, Mainz, Germany) discovered that some geogra­phically isolated C. pipiens mosquitoes failed to breed, pro­ducing few or no progeny due to a phenomenon named cy­toplasmic incompatibility (CI). In 1967, he established that an incompatibility factor transmitted from mothers to off­spring is responsible for the failure. Janice Yen and Ralph Barr (University of California in Los Angeles, California) in 1971 proposed that Wolbachia are the ultimate incompati­bility factor causing CI, and it was later discovered that Wolbachia-carrying (symbiotic) male sperms in fact get mo­dified. This sperm modification prevents the normal development of fertilized embryos not carry­ing maternal Wolbachia (aposymbiotic), resulting in embryonic lethality. CI‑causing Wolbachia strains selfishly use this reduction in aposymbiotic host fitness to their favor, as symbiotic females are compatible and can successfully reproduce with both symbiotic and aposymbiotic males, pro­viding a relative fitness benefit to symbiotic females that rapidly drive Wolbachia through the po­pulation.

In 2008, two independent research groups from Australia and the United Kingdom made a ground­breaking discovery that wMel Wolbachia from Drosophila melanogaster flies block the pro­liferation of natural viral pathogens to provide resistance to the host. Researchers all over the world then expanded the investigation to mosquitoes and showed that Wolbachia are also refrac­tory to several other medically important mosquito-borne viruses (arboviruses) such as dengue, chikungunya, West Nile, and Zika. These findings led to an idea that the application of a CI-based drive could spread Wolbachia into wild mosquito populations to make them refractory to arbo­viruses and limit the virus spread to humans. Dengue‑spreading Aedes aegypti mosquitoes, how­ever, do not naturally carry Wolbachia, posing a challenge to drive Wolbachia into wild mosquito populations. Leveraging microinjection techniques, wMel Wolbachia was injected into A. aegypti eggs and established with successful transmission to the next generations. Further, to implement the idea into the field, a non-profit Eliminate Dengue Program was established that is now called WMP, supported by the Bill and Melinda Gates Foundation and subsequently others. Theoretical modeling predicts the establishment of Wolbachia in A. aegypti populations under most epidemio­logical settings and thus the spread of the pathogen-blocking trait should markedly curb dengue transmission. Using population replacement strategy (PRS), symbiotic males and females are re­leased to propagate and establish Wolbachia in the target population that eventually reduces the vector competence and thus disease burden in humans (Figure 2). The deployment of mosquitoes infected with the wMel strain of Wolbachia has been a resounding success. In Northern Australia, for example, the release of ten symbiotic mosquitoes per house per week for 10 weeks stably inte­grated Wolbachia into wild A. aegypti population at frequencies above 80–90%. Importantly, the bacteria have not been lost from the mosquito population in any of the areas after stopping the releases, highlighting success of the method. WMP started their field trials primarily in Australia in 2011 and, with the advancement of PRS efforts, reported no local dengue transmission in the area of Townsville, Australia. This led them to establish field sites and collaborations in many tropical countries with frequent cases of dengue infection including Indonesia, Brazil, Colombia, Vietnam, Sri Lanka, Mexico, and some Pacific Islands. Data confirmed that rise in Wolbachia-carrying mos­quitoes associates with protection of the residents from dengue transmission. 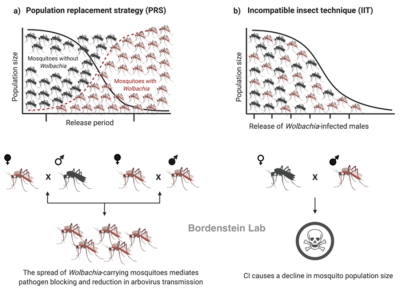 In the most recent study, WMP provided a "gold standard" trial proving the efficacy of PRS in Wolbachia control mea­sures. They released symbiotic mosquitoes in central Yo­gyakarta, Indonesia over a number of years. By selecting 12 wMel-infected mosquito release and non-release sites, they surveyed and compared the propor­tions of patients with dengue infection and dengue-related hospitalizations from release and con­trol sites. This comparative and controlled method yielded a 77% significant reduction in the in­ci­dence of dengue cases and 86% reduction in hospitalizations among a community that endures frequent dengue outbreaks. Researchers have also reported a similar reduction in cases of den­gue as well as chikungunya in an urban area near Rio de Janeiro, Brazil.

Every year, evidence for Wolbachia-based efficacy to control dengue and related mosquito-borne viruses is rapidly accumulating, highlighting the enormous potential of this approach to fight ar­bo­viral diseases at a global scale. That day is not far when governments and the World Health Orga­nization will approve this microbial ally for even broader and more significant applications.

Drs. Rupinder Kaur, Sarah R. Bordenstein, and Seth R. Bordenstein are biologists in the Department of Bio­lo­gical Sciences, Vanderbilt University, Vanderbilt Microbiome Initiative in Nashville, Tennessee, USA. The labo­ratory endeavors to understand and disseminate the principles that shape interactions between animals, mi­crobes, and viruses and the basic and translational outcomes of these interactions. The lab team has studied Wolbachia for more than 25 years and directs the worldwide science education series Discover the Microbes Within! The Wolbachia Project that engages students worldwide in biodiversity, biotechnology, and bioinfor­ma­tics on the Wolbachia symbiosis.