« Bacterial Symbionts Halt The Disease Burden of Dengue Virus | Main | Care For A Glass Of Chicha? »

...for the most part. And it's vastly deeper than the diagram Roberto showed in his recent post "The Biological Pump". The euphotic and mesopelagic zone sizes are correct, but do not even ap­proximately correlate with their vertical representation in the diagram. Why is this a point worth mentioning? No one expects scale accuracy from a chart or diagram, right? It's worth it, though, because humans prefer to think visually. We understand proportions better if in a diagram the distances are shown to scale. 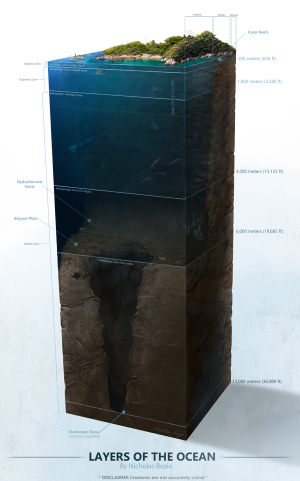 Take a very practical example. If a diagram shows the oceans "shallow" to fit on a page (web or print, it doesn't matter), the photosynthetic cyanobacteria at or deep in the sediment of the ocean floor are not particularly surprising. They could have just somehow fallen down and eventually been buried. With correct scaling however, it looks quite different when cyanos are now reproducibly found >3,000 m(!) below the "euphotic zone", that is, in absolute dark­ness, and thrive there in surprisingly high numbers. What the heck are they doing there? Definitely not photosynthe­sizing...

I'd like to share with you a "wow" moment I had recently (see Figure 1). You may know diagrams of the pelagic zone as you find them in Wikipedia. For example this one with the wonderful, yet surprising, sky-blue for the "Hadalpela­gic" at a depth of 10 km, or this one, which at least shows the darkness 'down there'. Enter science illustrator Nicolas Bezio, presenting the ocean water column in all its spendid darkness. While you take a deep dive let me point out a few flaws. Sure enough, no technical trick, not even Vantablack, can realistically reproduce the darkness in the ocean's depth in print or on screen, the maximum is "black" (hex color code #000000). The abyssal water and its surrounding basaltic rock are equally dark − the latter being just less wet − and one needs a minimum of difference in contrast and color to visualize a water-filled abyssal trench. Also, the not‑really‑dramatic differences in density of the abyssal water (~1 g/cm3) and its surrounding basaltic rock (~3.5 g/cm3) can hardly be visualized. So, here Nicolas Bezio made a reasonable compromise.

More problematic, actually deceiving, is the addition of marine life. The sperm whale, the deep-sea squid in the bathypelagic zone, and the starfish loitering on the abyssal plain are certainly not de­picted nearly to scale (easily off by a factor of 100, mentioned by Nicolas Bezio in his disclaimer byline.) This "artistic freedom" makes the water column more vivid but belittles it. On the other hand, the animals would only be a few pixels at the right scale. Think of emojis the size of periods or commas. Lastly, the ~300 m long shoreline and coast, and the boat on the left, are likewise "off scale" with respect to the vertical extension of the water column. So, the more familiar visual cues for the viewer, the "calibration points", are in a way misleading. Enjoy the image despite these limitations. An aside: the same li­mitations of awkward scales apply to the famous drawing "Geo­graphie der Pflanzen in den Tropen‑Ländern" of Alexander von Humboldt.

However, Nicolas Bezio has solved one aspect very well: the monstrous steepness of the walls of the abyssal trench. There are few examples above sea level of ~1 km high vertical cliffs − El Ca­pi­tan in Yosemite National Park comes to mind. It is different under water. Erosion and rock slides can't proceed as we're used to, letting the rubble slip downwards by gravity due to the immense density differences of air (~0.0013 g/cm3) and water (~1 g/cm3). You see such steep abysses easily when peeking on a nautical map of the coast of El Hierro island − with a highest elevation of 1350 m at Malpaso, going to 2400 m below sealevel within ~1000 m from the coastline of Las Playas − or on a silhouette of the elevation above the seabed of the island of St. Helena.

This blog goes back to tweet by @NickBezioArt and the interesting discussion in the accompanying thread. We had re-tweeted it earlier.