Teachers Corner: The Name for the Small Things We Consider

by Elio and Roberto 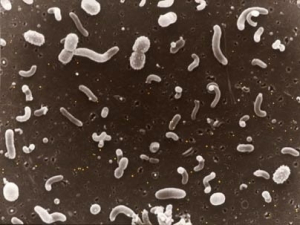 As microbiology teachers, many of us delight in retelling the 17th century story of Leeuwenhoek peering through his mi­croscope at samples from his dental plaque or Delft canal waters and naming the creatures he observed "animal­cul­es." However, that story is apocryphal because Leeuwen­hoek spoke Dutch. The words he used to describe his ob­servations were dierken, diertgens, diertjes, all diminutives of dier, the Dutch word for animal. Because Leeuwenhoek was not fluent in English, his early letters to the Royal So­ciety were translated by the Society's secretary Henry Ol­denburg. It was Oldenburg who translated dierken to ani­malcule, a word already in use when referring to such small things as sperm. The use of animal­cules largely disappeared by the late 19th century, replaced by the French word microbe, coined by the surgeon Sédillot and popularized by Pasteur. Around the same time, the synonymous word microorganism came into usage. Both microbe and microorganism have been used to denote prokaryotes and small eukaryotes.

To get a sense of the frequency of usage of the two words you can play (as we did) with Google Books Ngram Viewer. The use of 'microbes' peaked in frequency at the end of the 19th century and then declined until it was overtaken by the use of 'microorganisms' around 1914. But the use of mi­crobes is making a comeback. Which word is preferable? We confess that we much prefer microbes*. Because it is shorter, we find it snappier.

*Mind you, this preference applies in English. In other languages the words equivalent to microbes (e.g. Span­ish microbio, German Mikrobe) carry the connotation of pathogen, while the translated words for mi­cro­or­ganisms (e.g. micro­organismo, Mikroor­ganismus) do not.