Extreme Living in the Atacama 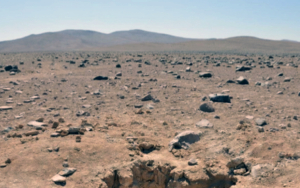 Fig. 1. The Yungay site in the Atacama Desert. Source. Fron­tis­piece.

This photograph resembles some of the images cap­tured by the rover Perseverance and sent back to Earth from Mars. Instead, it was taken by a human at one the driest and most inhos­pitable places on Earth, the hyper­arid Atacama Desert in north­ern Chile. For decades the Atacama has attracted a multi­tude of explorers for, among other reasons, the fact that some of its soils are thought to be like those of Mars. Not least among those explorers are today's microbe hunters, seeking to charac­terize microb­ial life in Earth's most extreme environ­ments. In a post last year, Christoph des­cribed how some cyano­bacteria make a living in the ex­tremely dry Atacama: they can extract water of crystal­lization that is normally trapped in rocks. Culture-independent surveys (meta­genomics) reveal complex microbial com­munities, even in the driest Atacama sites such as Yungay (shown in the photo­graph). Those studies show that as dry­ness increases microb­ial diver­sity decreases, as might be expected given that water is essential for life. When people search the Atacama for microbes using culture-dependent methods much of what they obtain are endo­spore formers, whose dor­mant spores are well-known for their resis­tance to desic­cation (think Bacillus subtilis). Since the meta­genomic studies clearly show the presence of non-spore formers, some key questions remain un­answered. Does the DNA found in some of Earth's driest hab­itats come from microbes that are dead or alive? If alive, are those microbes meta­bolically active or are they able to lie dormant for ex­tremely long times under such hyper­arid con­ditions? 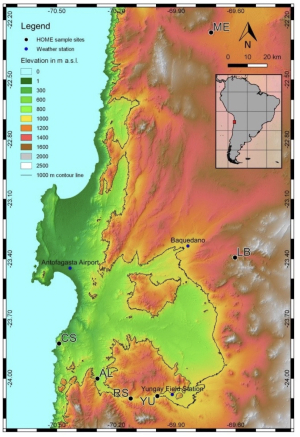 Those are the questions that Dirk Schulze‑Makuch et al. ("et al." here is a lot, 42 authors from 30 centers) sought to answer when they set out to sample soils from several Atacama sites. Their samp­ling ranged from fog-laden coastal soils (CS on the figure) to ex­tremely dry sites such as Yungay (YU) and Maria Elena (ME), both located about 50 km inland and about 1000 meters above sea level. They did their first sampling during April 2015, one month after the biggest rain­fall in the Atacama since recording started in 1978. An entire 8 mm of rain fell at Baquedano station! Whether the timing of the samp­ling after a rare rain­fall event was planned or the result of sheer seren­dipity, the authors do not reveal. But as you'll read, that rain had a sig­nificant effect on their results. To deter­mine if the microbes in the soils they sampled were alive, maybe even dividing, the team used a multi-pronged approach. They sampled surface (0–5 cm) and sub­surface (20–30 cm) soils, carefully keeping track of the physico-chemical prop­erties with respect to habita­bility. Using tech­niques developed before, they sep­arated the microb­ial cells from any extra­cellular com­ponents present in their samples. This allowed them to quan­titate and charac­terize as sep­arate pools extra­cellular and intra­cellular com­ponents such as meta­bolites, ATP and, of course, DNA. They were dealing with ex­tremely low levels of bio­mass and the work required extreme care; for those in­terested in experi­mental details I refer you to their extensive des­cription of the methods. Suffice to say that from those analyses they found evi­dence that at least some of the cells in those habitats were active. What I found most exciting was that they ob­tained evidence that at least some pop­ulations of bacteria were growing rela­tively rapidly! 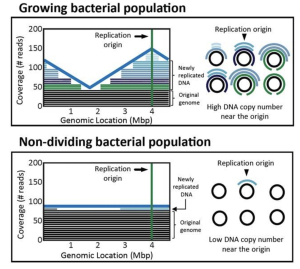 Fig. 3. Peak-to-Trough Ratio: deter­min­ing growth dynamics based on num­ber of reads. Adapted from Fig. 1. of Source.

To obtain such evidence they followed an approach that, in its prin­ciple, had been developed to map bacterial rep­lication origins nearly sixty years ago. It relies on the fact that non-replicating chrom­osomes will have a single copy of their origin of rep­lication as well as of all its other genes. In contrast, rep­licating chrom­osomes will have a higher dosage of genes near the origin. While those early experi­ments relied on trans­formation or trans­duction to measure gene dosage, in 2015 Korem et al. dev­eloped a way to infer in vivo growth rates based on the freq­uency of seq­uence reads in a meta­genomic sample. Here's how the authors guide us through the graphic depiction of their method: "Seq­uenced reads (right) are mapped to com­plete bac­terial genomes and the seq­uencing cov­erage across the genome is plotted. Each bac­teria cell in a growing pop­ulation (top) will be at a dif­ferent stage of DNA rep­lication, gen­erating a cov­erage pattern that peaks near the known rep­lication origin (green ver­tical line in graph), and thus produce a proto­typical seq­uencing cov­erage pattern with a single peak and a single trough. Bacteria from a non-dividing pop­ulation (bottom) have a single copy of the genome, prod­ucing a flat seq­uencing cov­erage pattern across the genome. The peak-to-trough cov­erage ratio is a measure of the growth rate." To make this sort of ap­proach easily accessible, Brown et al. developed an algorithm, which they call iRep (for index of Replication). Sequence data from non-growing bacteria will yield iRep values of 1 while iRep values higher than 1 are indicative of a growing pop­ulation. The iRep algorithm can be applied to any micro­biome study so long as nearly com­pleted draft genomes can be obt­ained. That is exactly what Schulze‑Makuch et al. did.

Based on their seq­uencing data, they were able to obtain reas­onably high-quality draft genomes for four bacteria, one from the Yungay site and three from the Maria Elena site. Impor­tantly, the iRep values for all four – partic­ularly the Actinobacterium from the Maria Elena site at 3.31 – strongly argue that these bac­teria had rep­licating chromo­somes at the time of samp­ling. The question that immed­iately comes up is just how long can members of these microb­ial com­munities grow? Is such replication activity representative of what is going on all the time or is it repres­entative of something that only happens after a rare rainfall? 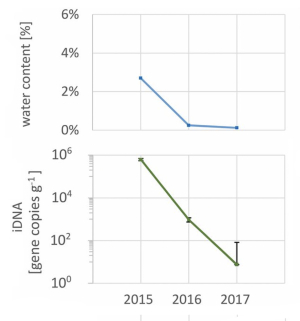 Fig. 5. Loss of water and iDNA as a func­tion of time. Adapted from Fig. 4 of Source.

The authors do not address this question directly, but they did obtain indirect evidence that high microb­ial activity in the sub­surface likely only occurs during rela­tively short periods after a rain­fall. Turns out, the team went out to the same sites and sampled again in 2016 and 2017. Lucky for them, it did not rain much in the interim. Several of their results were con­sistent with those habitats becom­ing less and less prop­itious for life. Most striking to me were a couple of observ­ations at Yungay in sub­surface samples (20–30 cm depth). The water content of the soil drop­ped from 2.7% in 2015 to 0.1% in 2017. Con­com­itantly, the con­cen­tration of intra­cellular DNA drop­ped by some five orders of mag­nitude! No surprise they were not able to assemble genomes from those samples. But I am willing to bet that the iRep values for those rem­aining cells – if they could be ob­tained – would be 1.

The picture that emerges for life in these hyper­arid environ­ments is one where short bursts of microbial activity and growth are inter­spersed by much longer periods of in­activity, what the authors refer to as "tran­sitory microb­ial habitats" in their title. How long can these periods be? Many might want to extra­polate what happens in the Atacama to what might happen in Mars. I am simply in awe at the resil­ience of our very own Earth-bound microbes.