For Bacteria, Mating can be a Stressful Business

Figure 1. Several Bacillus subtilis strains were isolated from 1 cubic centimeter of soil, at the riverbank of Sava river (Slov­enia) (A). Some of these strains formed a boundary in a swarm­ing assay, while oth­ers merged with each other (B). Source of B image.

Bacteria live in microbial jungles where they con­stantly must cope with sib­lings ex­ploit­ing their food, pred­ators trying to eat them, or hostile strains shoot­ing at them with anti­bacter­ial wea­pons. Through billions of years of evo­lution, they dev­eloped various strategies for resource com­petition, self-defense, and killing. It happens that inter­bacterial combat can result in more than death or victory. In 2015, re­search­ers found that right after the killing act, bacteria can take up genetic material from their dead en­emies and incor­porate it into their genome. While we have long been aware that some bacteria can take up for­eign DNA − an ability called natural com­petence − the answer to the question of why they do that depends on what the fate of that DNA might be. Some bacteria might use the DNA as a food source, others could use it to repair their own genetic material, and still others could exploit the ac­quis­ition of new genes to increase their adaptive potential (by analogy to the benefits of sexual reprod­uction). So, which DNA would be most des­irable for a given bac­terium? If DNA is to be used solely as food, it should not matter where it comes from. If exo­geneous DNA is used to fix damage in the recip­ient's genome, the donor should be closely related to the recip­ient. And if exo­geneous DNA is to serve as a source of new genes, it should come from someone more dis­tantly related. Re­searchers from Bio­technical Faculty at the Uni­versity of Ljubl­jana have recently found which DNA is prefer­red by the soil bacterium Bacillus subtilis, providing an im­portant new insight into bacterial evo­lution. The answer was hidden in 1 cubic cm of soil from the river­bank of the Slo­venian river Sava. From this tiny soil sample, Polonca Štefanič isolated and char­acterized dozens of B. subtilis strains that became foun­dational for pio­neering microb­ial ecology studies in Ines Mandić Mulec's lab (Fig. 1A). 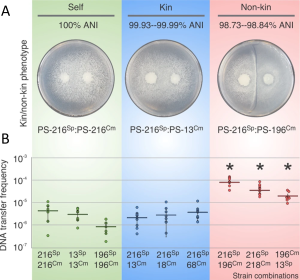 Figure 2. Swarms of two identical strains PS-216 harboring different antibiotic resis­tance markers, merge with each other. Similar is the case of PS-216 and PS-13, which are kin. Swarms of PS-216 and PS-196 do not merge, as these strains are non-kin (A). The efficiency of DNA transfer, measured as acquisition of new antibiotic resistance from the co-swarming partner, is the highest for the non-kin pairs of strains (B). Source.

I was lucky to join the Mandić Mulec group as a PhD stu­dent, around the time when they ob­served a fascin­ating be­havior of their isolates. When swarming on semi-solid surfaces, some B. subtilis strains formed a peculiar bound­ary when they met (Fig. 1B). I recall our con­stern­ation when we found that similar work was in progress in Roberto Kolter's lab. This was soon followed by the exciting and stim­ulating research atmo­sphere that ensued when the two groups joined forces. This collab­oration led to the discov­ery of the first com­binator­ial kin-discrim­ination sys­tem which operates to dis­criminate among very closely related strains. Identical, or nearly identical, strains (kin) can mix when they en­counter each other. But thanks to the combin­atorial system, when less related strains (non-kin) meet, they compete using several molec­ular tools. Com­petition is mani­fested as a boun­dary visible in the swarm­ing assay.

Figure 3. Scanning electron microscopy rev­eals the presence of dead cells at the boundary between the non-kin strains and healthy-looking cells at the meeting point of the kin strains. Source.

What does kin discrim­ination have to do with natural com­petence and DNA uptake? In their recent work, Štefanič et al., show that genetic ex­change and natural trans­form­ation are greatly in­creased at the boundary formed when two non-kin strains meet. This increase in recom­bination does not occur when two kin strains meet (Fig. 2). The authors per­formed swarming assays with six B. subtilis strains of dif­ferent genetic related­ness and measured the freq­uency of genetic ex­change. They found that the effi­ciency of genetic ex­change in­creased with in­creasing genetic dis­tance be­tween the isolates. During the ex­change, one strain always seemed to act as DNA donor and the other as DNA recip­ient, with the latter having higher com­petitive fitness at the boun­dary. The fierce com­petition at the boun­dary was also evident from the mor­phology of cells, which looked like empty bags, as compared to the healthy rods found at the boun­dary of kin strains (Fig. 3). Therefore, within the related­ness scale in which the B. subtilis kin-discrim­ination system operates, the effi­ciency of genetic ex­change increases with the genetic dis­tance between the isolates. For some strains that could take up DNA when paired with non-kin, trans­formation rates were below the limit of de­tection when paired with kin, in­dicating that some sort of in­breeding bar­rier exists in bacteria (for more on the in­breeding angle, check this blog).

Harass the competitor and open up for its DNA 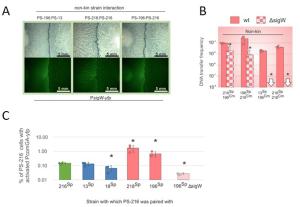 Figure 4. At the boundary between two non-kin strains, one of them suffers from cell-envelope stress, as indicated by the stress-response reporter sipW-gfp (A). Re­mov­ing of stress response in one of the non-kin strains by sipW deletion, re­sults in reduced DNA transfer frequency (B). Dur­ing inter­action with non-kin (pink bars), genetic competence is upreg­ulated, com­par­ed to interaction with self (green), or kin (blue), as indicated by higher % of cells expressing comp­etence reporter PcomGA-gfp. Removal of stress response from the non-kin interaction partner, can­cels the ef­fect of competence up­reg­ulation (C). Source.

What I find most striking is the mech­anism which leads to the in­creased genetic ex­change between the two non-kin strains. As a first guess, one could think that killing the donor strain at the boun­dary leads to more DNA being released to the environ­ment and thus more DNA being avail­able for uptake by the recip­ient. But it is much more com­plicated! The authors found that there is plenty of exo­genous DNA at the meeting points of both kin and non-kin strains. So, why is the DNA uptake from the non-kin strain more efficient? It turns out that when two non-kin strains en­counter each other, one of them suffers "cell-envelope stress" (Fig. 4A). This is some­how sensed by the other strain and results in it inducing its natural com­petence. There­fore, the recip­ient first attacks the donor via the com­bina­torial kin-discrimination system, and then specif­ically reacts to its stress-response by in­creasing natural com­petence (Fig. 4BC). Since the meeting of two kin strains is stress-free, natural com­petence is not up­regulated when the closest sib­lings encounter each other. These findings strongly support the idea that B. subtilis takes up exo­genous DNA to expand its genetic reper­toire, likely speeding up adap­tation to new environ­ments. 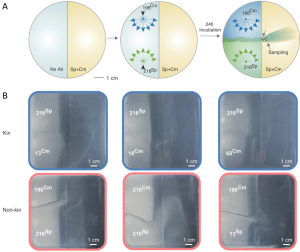 Figure 5. Experimental design to test the adaptive potential of increased levels of DNA exchange between the two non-kin strains (A). In contrast to pairs of kin strains, pairs of non-kin strains rapidly expand to the niche where two antibiotics are required for growth (B). Source.

The last, "cherry on the cake" experi­ment in this study con­firms the increase adap­tation idea. The authors show that a pair of non-kin strains, each equip­ped with a gene con­fer­ring resist­ance to a dif­ferent anti­biotic, readily form recom­binants harbor­ing both resist­ance genes and are thus able to invade an area where both anti­biotic resist­ance genes are required for growth. This pheno­menon does not occur when two kin strains meet (Fig. 5).

It is time to revisit the long-standing idea that naturally com­petent bacteria prefer their closest rel­atives as DNA donors, at least for B. subtilis. The study of Štefanič et al. clearly shows that B. subtilis prefers DNA from the non-kin, less related strains. Let's rem­ember that the B. subtilis com­binatorial kin-discrim­ination system operates on fine scales of genetic related­ness and that the non-kin strains are still rel­atives that belong to the same species – perhaps an ideal com­promise between genetic novelty and risks of del­eterious effects of foreign DNA uptake. The link between com­petition and genetic ex­change sheds new light on the evol­ution of naturally com­petent bacteria. When fight­ing and mating go together, the winner of an inter­bacterial combat may never be the same again… 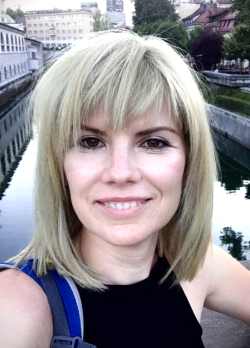 Anna Dragoš is an Assistant Professor at the Biotechnical Faculty, University of Ljubljana, Slovenia. She graduated in 2014, from Ines Mandić-Mulec lab, spent six years as a postdoctoral fellow in Ákos T. Kovács' group working on B. subtilis evolution in biofilms. Currently she is heading her independent research group on host control by phage using B. subtilis as a model system.