...and get pushed around instead. Not equipped with flagella for propelling or Type IV pili for twitch­ing they can't actively move. But one step at a time. If you recall what you know about mito­chondria, you may picture them as ovoid or bean-shaped organelles, housemates floating in the eukaryotic cytoplasm. They are usually referred to as the cells's "powerhouses". Ancestors of the mitochondria of all eukaryotes were the first "endosymbionts" according to Lynn Margulis, and probably most closely related to extant rickettsiae. But no more eukaryogenesis for now. 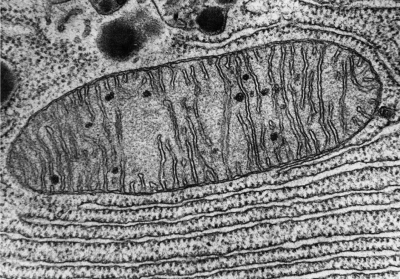 Longitudinal section of a mitochondrion and sur­round­ing cytoplasm from the pan­creas of the bat, Myotis lucifugus (Cre­dit Keith Porter/SPL). Source

Here, I will share a few facts about the shape of mitochon­dria and their intracellular movements that textbooks and their illustrations tend to neglect. See, for example, the cute mitochondrial "beans" in Wikipedia's 'Ani­mal Cell Diagram' (number 9) that you may remem­ber from introductory clas­ses (or that you may have once drawn similarly to this?) Or look at the illustration on the right, which is from Chapter 7: Mitochondria of Don Fawcett's authoritative if slightly out­dat­ed work The Cell − An Atlas of Fine Structure (2nd ed., 1981).

Clearly visible in the figure are both mitochondrial mem­branes and the cristae, invaginations of the inner membrane that are the hallmark feature of mi­tochondrial anatomy (see here for a detailed diagram.) The components of the respiratory chain and the ATP-synthase − its F1(α3β3) "knob" faces the cytoplasm like in the Gram-negative bacteria − reside in the inner membrane and densely populate the cristae. This is the decisive floor of the "powerhouse." It is the cristae, their number and their spatial arrangement, that largely determine the shape of mitochondria. Take a minute to look at the surprisingly different shapes that mito­chondria can assume as shown in Figure 2 of the recent review by Glancy et al. (Open Access). An aside. What appears as "membrane sheets" arranged in layers below the mitochondrion in the figure is the rough endoplasmic reticulum (RER), easily recognizable by the ribosomes strung like garlands on its outside (as it must necessarily appear in a flat, two-dimensional representation.)

So, if the way mitochondria obtain their shape has nothing to do with how bacteria do it, and − as Elio explained earlier on these pages − neither does the way they fuse or divide, their represen­tation in textbooks as bean-shaped tiny bags can only be in reference to their evolution­ary origins (and slightly misleading at that.)

Caption of Dylan Burnette's tweet: "A cell vi­deoed through a microscope. The pow­er­houses of the cell, mi­tochondria (yel­low), and the tracks they move on, mi­cro­­­tu­bules (blue), are shown. Of course, each have more roles in the cell than that." The animation runs in loop; loop length: 10 min in real time. Source

But how do mitochondria move inside their "landlord," the cell? Passively, that is, they are moved, get pushed around by "landlord components". Briefly, outer-membrane recep­tors of the mitochondria are recognized by so-called adap­tor proteins, which in turn attach their load, the mitochon­dria, to motor proteins that then drag them along actin fi­laments or microtubules (see here for a diagram from Fre­derick and Shawn (2007).) Attachment of mitochondria to and detachment from the cell's cytoskeleton, and this "push­ing around" are of course highly dynamic processes. You get a vivid impression of this dynamics from the micro­scopic movie by Dylan Burnette's lab at Vanderbilt Univer­sity in Nashville, TN, shown here to the right. Yes, you can spot bean-shaped (yellow) mitochondria zipping along mi­crotubules (blue) − being zipped, to be precise. But most of the time, the mitochondria change their elongated shapes seamlessly, and even split and fuse occasionally. Since this movie is not published, the author explained to me in an email:"It is a video of a PtK1 cell in culture that is exogen­ously expressing [the mitochondrial matrix marker] Cox8A-mRFP (often simply referred to as "MITO-mRFP") and [the microtubular] beta tubulin-mEGFP. For the color overlay, I took advantage of a "hot" lookup table for the mitochondria. These come in a variety of colors and here I used "yellow hot" in Fiji. When overlaid on a non-hot lookup table it produces a nice contrast between the two channels. When I post things to Twitter tagged as #SciArt, this usually means that I have also adjusted the levels in a way that would not be generally acceptable for peer-reviewed publi­cation. In this case, I adjusted the gamma [=luminance], which I often use to make the data more aesthetically pleasing for social media. The movie is 10 minutes long in real time." [additions in square brackets are mine.] In another video from the Burnette lab one can see very well that the mitochondria form a rather regular network around the cell nucleus.

Dylan Burnette also pointed out in a tweet from 2019 that such dynamic, shape-shifting mitochon­dria had been observed by cell physiologist Margaret Reed Lewis as early as 1915, and published in a comprehensive Science paper together with her husband Warren Harmon Lewis, also a cell physiologist. She had mastered the technique of culturing animal cells in the laboratory, and pain­stakingly explored various staining techniques to find those that only marginally affect the "behav­ior" of the mitochondria. As an example, I present here Fig. 6 from their paper that has not been drawn from memory but isn't a photograph either. She used the camera lucida technique to pro­ject her microscopic view of magnified living cells onto a sheet of paper, which she then "fixated" by re-drawing. A pre-modern type of time-lapse imagery, if you wish, one drawing every two-and-a-half minutes (see the 'timeline' in Fig. 6). She states:"The mitochondria are slightly refractive bo­dies which vary greatly in shape, size, and position. In the living cell these bodies are never quiet, but are continually changing in shape, size, and position. Often as many as fifteen or twenty shapes may be exhibited by a single mitochondrium within as many minutes. This extreme plas­ticity of the mitochondria is a very important characteristic and was shown in every preparation examined. It is certainly a feature which must be reckoned with in any attempt to classify or to analyze their behavior from fixed material." 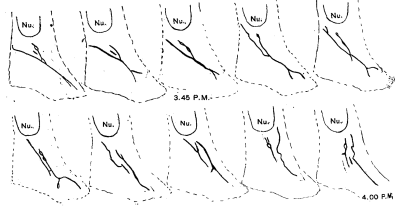 Fig. 6  From a living culture about 24 hours old, of a piece of heart from an 6-day chick, showing branching, fusion and splitting of two or three mito­chon­dria during a period of about 1 hour (par­tial image; click to see it in full ). Source

Today, as mitochondria in living cells can be routinely moni­tored, her comments turn out to be prescient and her ob­servations very accurate. As it happens in science, her work was largely ignored by contemporary and later cell biolo­gists who focused on elucidation of the fine structure of cells and their organelles by electron microscopy. They worked with thin sections of fixed cells, and − since tomo­graphic methods as they are standard in cryoET today were not available − very carefully presented mostly images in which organelles in longitudinal or cross sections were com­pletely bounded by membranes (and discarded sam­ples in which elongated organelles had 'slipped' out of the focal plane.) I have checked it: all 54 "portraits" of mitochondria in Chapter 7 of Don Fawcett's 'The Cell - Atlas...' show them perfectly surrounded by membranes, and mostly bean-shaped. With one ex­plicitly mentioned example of mitochondrial fusion, these researchers were so fixated on static pictures that Don Fawcett even writes:"No doubt in many cell types from time to time two mito­chondria may make contact and fuse into a single mitochondrion, but these are isolated events of little physiological significance." The dancing mitochondria in Dylan Burnette's videos of living cells tell otherwise, see for yourself.

Not that this closes the chapter on mitochondria, quite the contrary! It has become increasingly clear in recent years that mitochondria are not only located close to various other cell organelles due to space constraints − we saw this in the tiny unicellular eukaryote Ostreococus tauri, Pictures considerd #24 − but that they communicate via temporary physical contact and exchange of sig­nalling molecules and metabolites with themselves just as intensely as with other organelles. A topic for another post...