« For Bacteria, Mating can be a Stressful Business | Main | A Paramecium, a Purple Bacterium, and a Green Alga Walk into a Bar… » 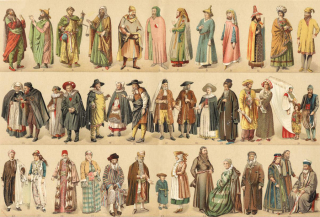 In a recent twilight dream, I pondered if there was a connection between Microbiology and Yiddish. You see, since my youth, Microbiology has not only been my vocation but my avocation. On the other hand, Yiddish was the language of my forefathers and, in my childhood, the one we most often used at home. Now, in old age, my interest in Yiddish has reawakened. So, if you allow me, is there a connection between Yiddish and Microbiology? In conclusion, I found none.

Among the early figures in microbiology there were Jews or part-Jews (Jacob Henle – a teacher of Robert Koch, Elie Metchnikoff, Ferdinand Cohn, Paul Ehrlich, Albert Wassermann, others) but, best I can guess, none of them were Yiddish speakers. Therefore, I could not associate this language and their work.

But Yiddish is such a flexible and adaptable language that surely a connection to Microbiology may be found, if only tenuous. I searched my knowledge of Yiddish sayings and found a relevant one, a curse: "Khap a khalerie!", which means "Catch a cholera!" Not so nice. On the other hand, it is possible to make connections between Judaism (and I don't mean the Yiddish language) and Microbiology. Jewish dietary laws were directly connected to hygiene, ergo Microbiology. I am not relating this to Yiddish, just to Jewish customs. In 1894, Alfred Nossig, a Polish Jew living in Paris, wrote a history of "the social hygiene of the Jews and ancient Oriental Nations" in which he argues that the old codices of China, India, Persia, Egypt, and what is now Israel, were not primarily religionist but were actually rules of hygiene designed to preserve the health of the people. Not every aspect of the Jewish dietary laws belongs to this scrutiny, a subject I will prudently not go into here. However, many proscriptions deal with ensuring that animals to be eaten were healthy and devoid of communicable diseases.

There is more, from a time that long precedes the birth of Yiddish (around the 10th century CE). For instance, the basic tract of Jewish religion, the Talmud (originating around the 2nd century CE), refers to the use of something called chamka or kutach bayli, a concoction of moldy corn mash soaked in date wine that was used to heal wounds. This is part of a larger story, wherein ancient healers made use of moldy bread and the likes. But to return my original intent, even though connection can be made between Microbiology and the Jewish religion, I have failed in my original intent, to relate it to the Yiddish language.