Back in 1980, when I was a post‑doc in the San Francisco Bay Area, I began to develop a taste for what I con­sidered a truly unique bread: San Francisco sour­dough. There was a cer­tain mys­tique to it, everyone fam­iliar with it claimed there was nothing like it any­where else. It was almost as if for sour­dough bread there was some­thing akin to the equally mys­tifying con­cept of terroir in wine. San Francisco sour­dough was so special that when the domi­nant lactic acid bac­terium present in its star­ters was iden­tified, it was named Lactobacillus sanfranciscensis (re­cently re-named Fructilactobacillus sanfranciscensis). This partic­ular species is widely used in the com­mercial prep­aration of sour­dough starters. 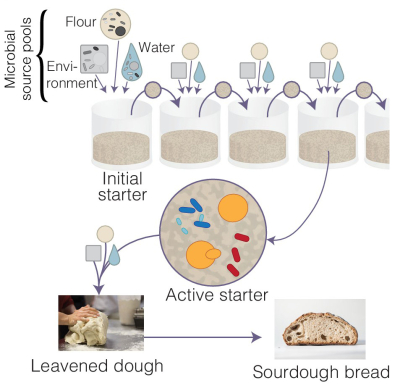 However, the real charm of sour­dough bread is not in ob­taining a com­mercially avail­able starter. It is in making and main­taining one's very own starter through serial pas­saging. The common lore is that by using the very simple mixture of flour and local water and whatever microbes are in the local environ­ment (be it the air, the dust or even the hands of the home baker), each starter will ac­quire its very own unique local char­acter. Thus, one would have expected strong bio­geographic patterns in the microb­ial com­munity com­posi­tions of sour­dough starters. Alas, such presump­tions were put to rest by a recent paper that describes the microbial com­munities of 500 sour­dough starters. Some­what surpris­ingly, the authors found very little bio­geo­graphic patterns in these starters. These are their ideas as to the pos­sible reasons for this: "The limited role of geo­graphy in explain­ing sour­dough diversity may be driven by the wide­spread move­ment of starters across large geo­graphic distances through starter sharing or com­mercial distri­bution. Flour, a major potential source of microbes in de novo starters is also moved across large spatial scales. This geo­graphic homo­geni­zation of starter and flour microbes likely swamps out any regional dif­ferences in pot­ential yeasts or bac­teria that can disperse into starters." There is a caveat to these results: the vast majority of the starters studied came from the United States. We'll have to wait and see if starters from regions remote from (and culturally isolated from) the United States show geography-determined patterns in their microbial com­position. While home bakers round the world wait for such results it will be perfectly fine to still feel that there is some­thing truly unique about their own sour­dough starters.