The foundation of much of modern civilization? Sand, actually. It's a key ingred­ient of concrete, and to con­struct any building you need a lot of it. It has to be sand from oceans, beaches, river­beds, deltas, lakes. All that desert sand made slippery-smooth by wind erosion won't do. Concrete remains the top used resource after water and that clamor isn't going any­where, since annual global demand for concrete is predicted to rise to 4.7 billion tons by 2025. Civili­zation is one very big sand­castle, and here's the problem with that: the world is run­ning out of sand. 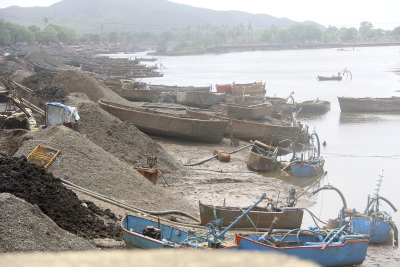 Ever heard of the "sand mafia"? Sand is in such high demand that it has spawned a black market that runs amuck with murders and hush-hush deals and rival gangs in a power struggle over the highly luc­rative dealings. The sand mafia gangs have been parti­cularly infam­ous in India, which has one of the world's largest con­struc­tion sectors. Aside from the human­itar­ian issues, illegally dig­ging up sand with reck­less aban­don impacts the infra­structure of eco­systems. Suck­ing up sand en masse from a river­bed alters the depth, width, and the water flow rate, which in turn affects the wild­life and in­creases the risk of cave-ins. Not to men­tion all the carbon emis­sions that result from ship­ping sand to far-away coun­tries.

It's microbes that present alter­natives to the prob­lem – as so often seems to be the case.

Conven­tional con­crete is made by com­bining a coarse material like sand and lime­stone with a binding agent. This latter ingred­ient is most often cement. Elim­inating cement – which ac­counts for around 8% of CO2 emissions world­wide – from the nar­rative is one eco-friendly step. This nixes the step in which lime­stone is crushed and heated to 1450°C, a process that de­mands serious invest­ments of thermal energy. 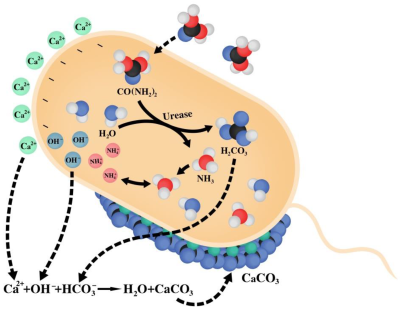 Bacteria offer one alter­native via a process called microbially induced calcite precipitation (MICP). Harnessing MICP to build "bio-bricks" is a clever co-opting of pro­cesses that occur in nature. Here, lime­stone is the main ingred­ient. First adding lactic- and acetic-acid-producing Bacillus pumilus lowers the pH and dis­solves the lime­stone. Next, this slurry is mixed with sand inoc­ulated with Sporosarcina pasteurii, whose urease splits urea into am­monia and carbon dioxide, which become am­mon­ium and car­bonic acid. This amps up the pH again and kick-starts MICP, which winds up with the prod­uction of calcium car­bonate crys­tals. Calcium car­bonate, aka chalk, is the bind­ing agent. Voila. No need for extreme temp­eratures.

The urea is a key bio-brick ingred­ient, as it splits into am­monium and car­bonic acid and thereby raises the pH to trigger chalk form­ation. In the above example, it was added exo­genously. But what about a more fam­iliar source of urea? Urine is in fact an ingred­ient in a bio-material invented by a design student. This material has 70% of the compres­sive strength of concrete, its recipe con­sisting of Sporosarcina pasteurii, sand, calcium, and of course – chef's kiss – urea derived from urine.

One example of such handy cyano­bacteria is the ubi­qui­tous marine dweller Synechococcus. Scien­tists at the University of Colorado Boulder and at the con­struc­tion firm Katerra have dev­eloped a concrete-like material by sticking the photosynthetic bacteria into scaffolds made of gelatin, media, and sand. Instead of increas­ing pH through urease-produced car­bonic acid, Synechococcus achieves the same end­point via the hydrox­ide ions it exports during photo­synthesis. In this way, it too trig­gers MICP and produces regen­erating "bio-bricks." 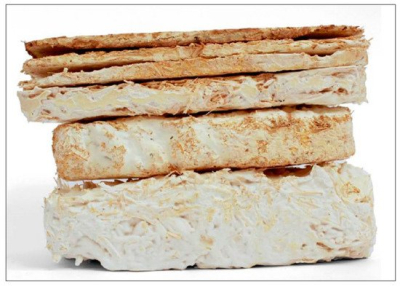 These methods, while elim­inat­ing the over-the-top energy con­sump­tion of con­ven­tional cement prod­uction, still use sand. Going com­pletely sand-free enlists the aid of some fungi – in the vein of STC's Fungomania. Mush­room mycelia have proven useful in the bio-brick arena. Bio-bricks prod­uced by com­panies such as the New York biotech Ecovative and the UK start-up Biohm are an amalgam of mush­room mycelia and agri­cultural waste like corn husks and leaves. No sand, no cement, no sky-high temp­eratures – but it's unden­iable that the current mush­room bricks' compres­sive strength (~30 psi) is a far cry from the compres­sive strength of concrete (2,500-10,000 psi).

And so, we continue to search for a way out of our sandcastle-existence…